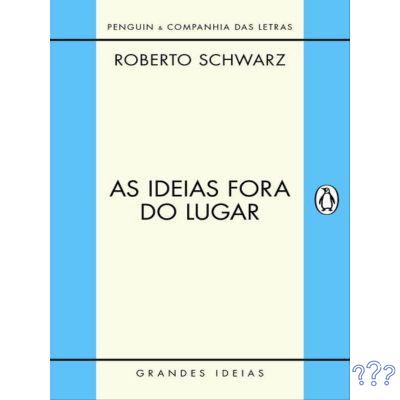 When I thought about the title of this post, I went back to one of the first texts I had contact with in college: “Ideias out of place”, by Roberto Schwarz, chapter of the book “To the winner as potatoes”. At the time, the idea of ​​the text didn't make much sense to me, but from the moment I started working and confronted with various points of view in the market, this text always comes up when I come across some opinions that I think are one-sided.

The idea of ​​Schwarz's text is that in our country, we have the habit of comparing oranges and apples, as well as importing ideologies, concepts, cultures and trying to apply them here without modification, as if our countrymen were like Europeans, for example. Thus, in general terms, we have that misplaced ideas are “the transfer of an idea valid in a given context to another in which it does not apply”.

Returning to the topic of the text, F-commerce, I have read many articles out there that seriously concern me with the reproduction of the “mutt complex”. That's because, for some, F-commerce is a market that hasn't grown and, according to what they point out, it won't even go away. I think in an extremely contrary way, I do believe, F-commerce will grow a lot.

However, those who decree the premature death of the market, make precisely the comparison of oranges and apples, that is, they compare the growth of F-commerce with traditional e-commerce, which has been consolidated in our country for a long time and dozens of from other countries.

For many, F-commerce didn't work out because people still prefer to shop on traditional websites. There are also those who claim that social networks are not an environment conducive to sales. Okay, everyone has their point of view and here I'll bring you mine.

It's obvious that F-commerce is far behind when we think about sales volume (if we compare it to e-commerce), however, we have to look at two places before saying that it doesn't work: for the future and for the base. Here, it is worth checking the 26th Webshoppers report. (see the 33rd webshoppers report)

look to the future

Looking to the future means seeing market trends and, I believe that using social networks to sell is no longer a trend, but a reality. If we think about the use of Facebook resources for sales promotion (the concept of F-commerce, according to Paul Marsden) we can have a much more interesting environment than we have today. With the professionalization of the social media market, the experience that we are acquiring and the adherence of small and medium-sized entrepreneurs to Facebook, everything indicates that the social network will be as important as the company's website for sales and communication. In fact, in many cases, it already is!

look at the base

When I refer to looking at the base, I am referring to looking precisely at small and medium-sized entrepreneurs, who are looking for solutions and alternatives to sell and profit over the internet. They are the ones who are proving that F-commerce works and that it works. According to Rodrigo Demétrio, from Facileme, “The application to sell via Facebook that we offer has more than 11 thousand registered stores and an average ticket of R$168,00. Our main retailer earns an average of R$24 thousand per month. It's not a very significant value if we think about traditional retail, but for a small retailer that only uses Facebook to sell, we believe it's a very good result, especially due to the lack of a culture of shopping through Facebook”.


The importance of SMEs is strong in other markets, such as the US. The article “Small retailers open stores on Facebook”, in The New York Times, opens up the reality: F-commerce is not a disruption for large companies, but it is a very important entry point for small retailers. As the text points out, “Small businesses seem to be more successful on Facebook than large companies,” says Sucharita Mulpuru, retail analyst at Forrester. Those who do well generally have less than $100.000 in revenue and less than 10 employees. Gap, Nordstrom, JC Penney and GameStop, on the other hand, have closed Facebook stores in the last 12 months because consumers are used to the richer experience on retail sites.”

That's where there are flaws when it comes to claiming that F-commerce doesn't work. We are playing the shuttlecock very high and saying that it doesn't work because many of the big players don't invest in this sales format, or those who do, are disappointed. For a company that makes 100 million a year, making 100 thousand with F-commerce is really a tragedy, but who never came close to making 100 thousand? What would you think of having that amount in the account?

A theory that gave the basis for e-commerce to show its value is, without a doubt, the Long Tail, by Chris Anderson. In it, Anderson shows the value of niche markets and points out how internet sales can expand both company revenues and consumer desires. The basic idea of ​​the theory, for those unfamiliar with it, is that:

In a simplified way, the author states that on the Internet, market niches have their space, because it is possible to offer everything, considering that there are no physical barriers in e-commerce, for example. For this reason, niche markets can become just as profitable and sell as much as best sellers. When selling over the internet, the cost to display a book on the consumer's screen is very cheap. If we were to leave this book on a shelf in a store, the cost of this book would be higher, as we would have to pay the store's rent, the attendant, taxes, salaries, etc. From this, it is possible for an online store to sell thousands of books and, for this reason, to contemplate copies that are not very popular, but that have buyers.

Exploiting niches and small markets is what small retailers already do in traditional retail. There are only T-shirt stores, wine stores, toys stores, used books stores, and so on. That's why looking at the head of the tail and saying that F-commerce doesn't work is a one-sided position, because other areas and sectors that benefit from it are not considered.

F-commerce and its sales tools are a great boost for anyone who wants to start selling online. With affordable costs, good technology solutions and low-cost marketing strategies made in the sales environment itself, I consider it to be very important and has taken off for those who still fly low, but still work for a day, who knows, also find that F-commerce does not give the expected return.

Is Cloudshop good? Check out our review ❯