Learn All About Periscope 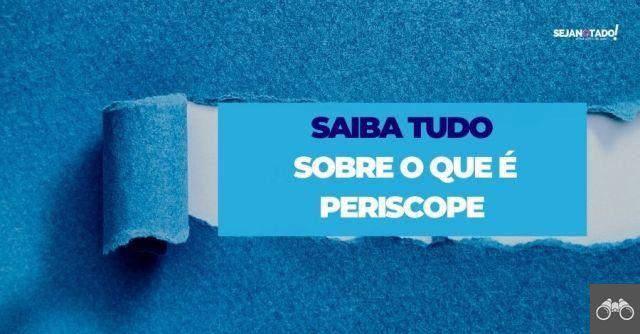 Learn All About Periscope

Looking around the internet, you've probably seen something out there about Periscope, right? If you still don't understand what it does or what it's useful for, don't worry, I'll explain in this text!

It is a mobile application that allows you to share live videos with your followers, who can comment or send hearts. They would be a “like” that people can give whenever they approve of what you are saying. Just like Snapchat, another app for sharing videos and photos (we'll talk about it here on the blog), its content has an expiration date, being on the air for only 24 hours inside the app.

What can I use Periscope for?

Periscope's main feature is live video streaming. In this way, there is not necessarily a single use for the tool. It is possible to share everyday scenes, such as tours and shows, among others.

Companies can use it as a channel to be closer to their customers, broadcasting news in the sector, holding promotions, small lectures and even conducting interviews with people in the same environment.

How to use Periscope?

Downloading the app is very easy: just download the app on your smartphone from the Play Store, in the case of Android phones, or from the Apple Store. Upon opening it, you will be presented with a mini tutorial of the app. Go through the screens and click “Get Started”. Register with your Twitter account or phone number. Then, just create your profile, add your friends and broadcast by clicking on the camera icon.


From tweets to videos

Periscope, despite its popularity, is a recent tool that was launched by a startup bought by Twitter earlier this year. It is estimated that its sale was made for around 100 million dollars!

The app is fully integrated with Twitter. This way, when you register with Periscope, you have access to a list of your Twitter followers who also use the video sharing app, allowing you to gather all your friends in a group, making it easier to interact with them

Marketing Salary: Know the salary ranges in the area ❯