Torchlight is a franchise with a good number of fans, who enjoy the style of ARPG, the one that takes us to the constant exploration of dungeons in search of better items to improve our character, as well as increase the level to unlock and maximize abilities. But even with all the success of an already established formula, Torchlight iii would not be the next game in the series, but the chosen one was Torchlight Frontiers, a free to play game with a somewhat different dynamic.

After an alpha phase, where the developers saw that players were not at all excited about the direction the franchise was taking, Perfect World decided to immediately stop Frontiers, and make it definitively the third game in the series, with the already established and traditional formula of both its ARPG and others already on the market such as Diablo and Path of Exile.

The mission of restructuring the entire project was in the hands of Echtra Games, which not only needed to transform the formula that was in progress, but also has the responsibility to please the fans of the franchise, who were eager for a continuation.

Despite the story factor not being a very important ingredient in most ARPGs, as the main focus is on the quality and grandeur of their gameplay mechanics, generally this type of game has a good plot to pack all this dungeon exploration, but don't wait nothing very memorable in Torchlight iii. I'd say more than that it's totally disposable, the kind that if it didn't even exist you wouldn't miss it. Even if it's not something very important in this type of game, the studio could have been more careful to bring something a little better built. 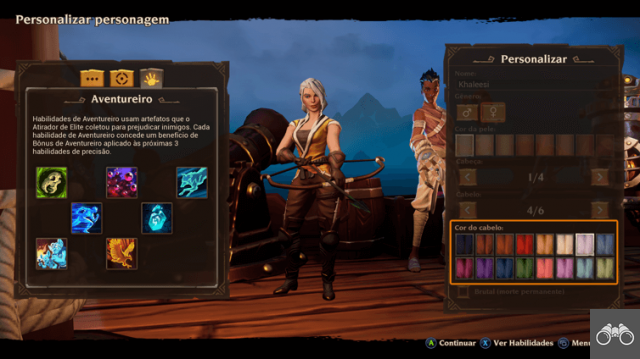 As for the story itself, it is divided into three acts, where we follow a plot that takes place 100 years after the events of Torchlight II, and the Empire of Ignis is in decline. We accompany Novastraia again in danger with the threat of an invasion, and it is up to you to defend it from the Infernantes and their allies.
Some animation scenes update us on the events that are being developed, but they also mix good animations with others with a low quality, which look like they haven't been revised as they should.

In the end, as the story isn't crucial in a game like this, the too shallow plot doesn't detract from the fun, and you'll rarely pay much attention to what's being said, as you'll be eager to get back to the exploration and combat, which and where Torchlight iii shows great potential.

Your first important choice will be on the selection screen, where your class and artifacts will be defined, decisions that can no longer be changed for that character. The game has four classes, which are: Sharpshooter, Twilight Mage, Forged, and the Railroad Master. Each one brings a little bit of each style loved in this type of game, with a mage focused on using spells, a warrior with heavier weapons, another more focused on high long-range damage, and still a true mechanical contraption for a high firepower with guns and turrets. Each class also has its own specific weapons. It has something for everyone.

In addition to the specific skill tree for each class, there is still the relic tree, which must also be chosen at the beginning of your journey, bringing an interesting subclass system. There are five more choices that greatly expand the gameplay possibilities. With some being focused on ice, fire and electricity damage, and others bringing massive bleed and poison damage. A pack that offers the possibility to equip up to nine active skills to use in combat and dominate the battlefield.

Each of these skills, whether from classes or Relics, can be upgraded up to ten times, raising the skill's quality to level 3, making them stronger and also unlocking additional perks. These upgrades, as well as unlocking skills, can be accomplished with the points you earn as you level up.

Finally, there is the Legendarium tab where we can add up to three bonus passive effects, which are received when acquiring certain legendary items. We start the game with some more basic options to choose from. 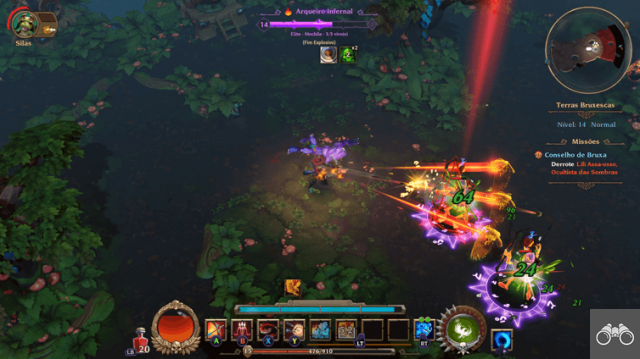 Items have four qualities, and can be found in chests or when dropped from enemies, the more dangerous an enemy or region you are exploring, the greater the possibility of getting better items. In addition to the item's normal power, you can also optimize it by linking it to your health with scrolls you find during your exploration, greatly increasing its stats. However, this has a great risk, because as he is linked to your life, if you die he will also be destroyed. An interesting mechanic that brings a giant weight to each step taken. Legendary items cannot take advantage of this mechanic.

Every battle ends up being important, even those bosses that will make you spend a good few minutes putting all your skill to the test to defeat them. And speaking of enemies, they have a good range, and offer a real challenge to your adventure. The bosses are really challenging, and the battles against them bring, in addition to difficulty, very interesting mechanics, making you pay close attention to every move he makes.

In addition to the activities on the map itself, when we eliminate certain special enemies, a portal opens to a Phase Dungeon, where we will face a boss from the story, but which has received a difficulty upgrade increasing the challenge, as well as the quality of the rewards. 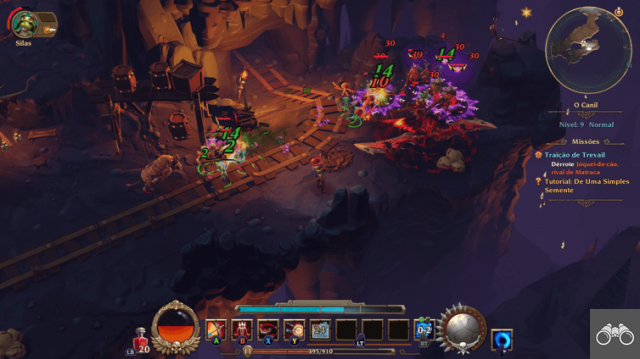 Another mechanic that is back, to expand the possibilities of gameplay, are the pets, which can be very useful in combat, both in battles themselves, and with the passive advantages they offer their owner. At the start of the game you can choose one, and you can also acquire several others as you explore the story acts and dungeons you complete. In addition, the game has a kind of season pass, which here is called the Adventurer's Contract, where as you gain fame by defeating great enemies and completing missions, you will rise in this ranking and unlock rewards, which also have pets among them. .

In addition to help in combat, pets also offer great storage help, as in addition to our inventory, which is not very large, we can also send items to the pet to store, and send it from time to time to the city to sell everything who is with him, something that makes the game more dynamic, because we don't have to go all the time in the city to sell items. Like items, these pets have rarity, and the higher their quality, the better their abilities. These helpers can also be equipped with three items, a collar, and two platelets, which greatly enhance their support in combat.

Overall, despite all the concepts presented above, the title brings a more simplified proposal from previous games, but that's not necessarily a bad thing. While the market offers more complex options, like Path of Exile, for example, Torchlight iii brings a more accessible and easy to assimilate possibility of fun, which can attract a new audience, expanding the player base. However, this may also disappoint fans of the wider possibilities of previous games a little, which had more complex skill trees.

Torchlight iii it also has an unexpected house system, where we have our own Fort that we can decorate according to our style and creativity. Resources and crafting items can also be found in our adventures. This location can be a good retreat to improve your items, test new skill combinations, or even just give wings to your architect side. 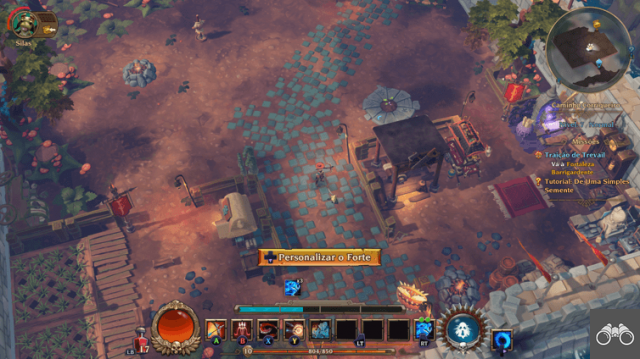 Last but not least, Torchlight iii can be enjoyed in a single player, or in its online multiplayer mode, where the adventure can be shared in groups of up to four players. Each mode has its own progression, which means your single player character cannot be taken into multiplayer. Both modes have the same story and mechanics, the only thing that changes is the possibility to play completely alone or with the presence of other players. That way, the choice is entirely up to the player's style. The characters' equipment is also leveled according to the area, which facilitates this online cooperation, as it does not limit co-op, in case one player is in a more advanced area than the other.

Multiplayer is very easy to connect and call friends, encouraging cooperation. I had so much more fun enjoying this journey with a friend than alone.

The graphic presentation of Torchlight iii It is very pleasant, with very colorful scenarios, and with lighting that enriches every detail of that universe. Despite a certain repetition of the environments in each act, in general they present a good diversity, offering an experience that does not tire the eyes. The maps are also randomly generated, so an area you enter once can change a lot on a second visit, both in the layout of the scenarios and in the enemies that can appear.

The abilities are very well presented on screen, offering a great spectacle, both with those activated by the player and those used by enemies. The effects are fantastic, making the battles dynamic and even more fun.

Performance is good overall, with few stutters and no crashes, even when there are a lot of enemies on screen. I played some on Xbox One X and some on Xbox One Fat, and performance was great on both. On Xbox One X there is the advantage of playing in 4K, which maximizes visual quality. The loadings on both consoles are pretty fast, which doesn't detract from the action. 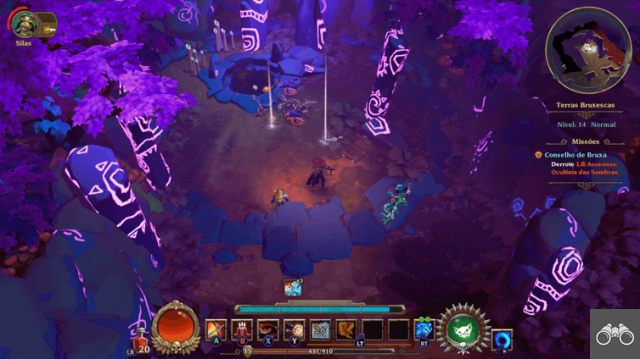 The soundtrack is pretty basic, and even if its simplicity doesn't interfere with the gameplay, it doesn't add grandeur to the battles either, which is a shame. On the other hand, the sound effects of skills and weapon strikes are very well done and bring weight to each combat. The dubbing of the characters is quite shy, but the little that exists is well directed and fulfills its purpose of presenting the missions and their events.

The game has dialogues and menus in Portuguese, but the story animations are without subtitles, and some skills and items have not been translated. It's nothing that gets in the way of gameplay, but it needs to be fixed in an update.

Torchlight iii simplified the formula of the previous games, but that didn't make it any less interesting. The game is still very fun, with several options to approach the challenges in the way that best adapts to your style of play. The graphic presentation also brings very beautiful scenarios and interesting effects, as well as a performance that does not disappoint, even in moments with more enemies and skills on the screen.

On the other hand, it was clear that the game's style change, in the middle of the project, greatly harmed the overall content, as the title could have received a more interesting plot, and more acts to expand the adventure.

Even so, Torchlight iii offers a good option for those looking for a fun ARPG to enjoy with friends, because if the game is interesting when played alone, it shines even when the adventure is shared with other players.