Subnautics: Below Zero is the sequel to the critically acclaimed Subnautica, both developed by Unknown Worlds Entertainment. It is an action-adventure survival game set in an open, aquatic world.

Development started from scratch and spent a lot of time in Early Access, with a total of 11 versions to go. During that time, players were able to contribute, reporting issues and suggesting improvements. In fact, the game still allows you to send suggestions and problem warnings.

Subnautics: Below Zero drinks a lot from the source of the previous game, including some story topics, which also takes place on Planet 4546B, present in the predecessor.

You are Robin Ayou, an employee of Xenoworx - an initiative of Alterra - who, after an incident on Planet 4546B, decides to sneak there to discover the truth about her older sister, Sam Ayou. She'll also discover that this isn't just an ocean planet with Pengwings, which are both cute and bizarre penguin-like animals, roaming around. Ancient aliens, a near-uncontrollable disease and a power-hungry corporation all fit into the bigger picture. Before the accident, Sam was working in an icy region known as Sector Zero, and various pieces of information are scattered across the planet.

The game has 4 modes, 3 of which follow the narrative, and a creative mode for you to abuse your creative talents, building bases and improvements without worrying about surviving on an icy planet. Most of the game, as the name implies, takes place underwater, with two explorable islands and a day and night cycle that affects the visibility and behavior of the fauna.

It is a survival game, so the main objective is to survive on a planet with sub-zero temperatures on the surface, with an acceptable temperature in the underwater part due to several hydrothermal vents. You end up making an emergency landing with just your basic attire, a PDA (tablet) and lots of questions. Your character is given the location of the survival pod and has to turn around to find out more information.


The game does not have a navigation guide and objective control, you will be on your own, running after food, water and especially knowledge. In the survival pod you will find a Fabricator, a machine that you use to manufacture the most diverse items, including food, as well as tools and improvements. These items will be unlocked as you discover information about them and obtain the blueprints, and from there, you will be able to build them with the necessary resources. 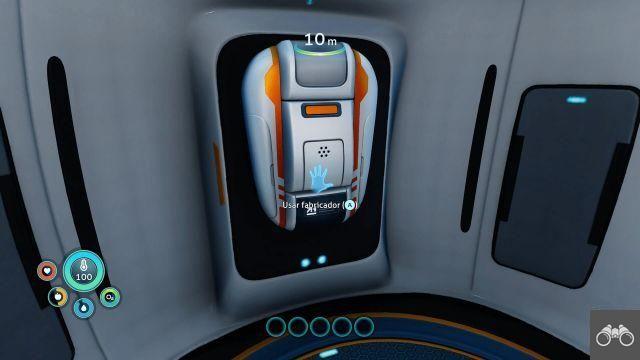 This progression is very well balanced and with a great learning curve. However, as resources, and of course information, are scarce, you will have to explore and delve back and forth to your pod. You need minerals, plants, and animals to get the resources you need for survival, and from them build MacGyver-style engineering tools and wonders. The adventure will really begin after building your Digitizer, a very important tool, used to obtain information on the flora, fauna, minerals and parts scattered across the depths of the ocean, making it possible to have the diagram on your PDA to manufacture various tools and items. Ah the compass will also be of paramount importance.

The basic resources for survival such as food and water will be obtained through the consumption of fish and algae, which once identified, you will know how much each one will feed you and if it will compromise your thirst, because after all you are under the sea. But it was a mistake to think that it would be enough to collect fish to save you, because once they are only cooked in the Fabricator, they will spoil more easily, losing points of recovery from the hunger level. With your research you will discover the importance of salt and its use, adding greater durability to freshness, but consuming thirst points. It will be an eternal struggle to find the best combination and have the best stock always present when you need it. Managing your inventory will be of paramount importance, a task that becomes a little easier after the “discovery” of lockers and vehicles. 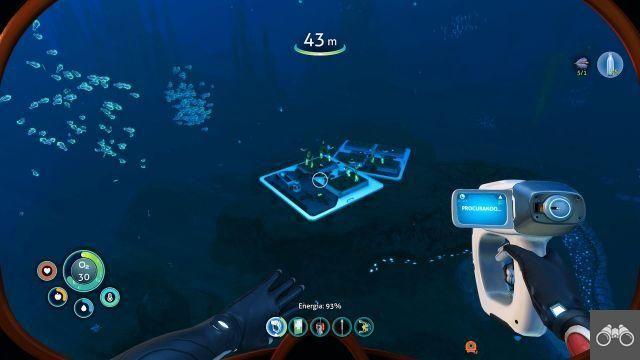 Many of your tools will require resources to manufacture and energy to use. The evolution line is very extensive, and you will be able to manufacture, in addition to vehicles and suits, true bases, in the best tycoon style, with energy generation needs for oxygen production, lift control and even atmospheric pressure, with the right to bed, showers, aquariums and battery chargers.

An interesting tip is that before venturing into building bases and the like, and thus consuming your resources, it's interesting to play a little creative mode, to understand how things fit together and what possibilities are viable. This mode is also excellent for fans of building habitats and their ecosystems in the best tycoon style. 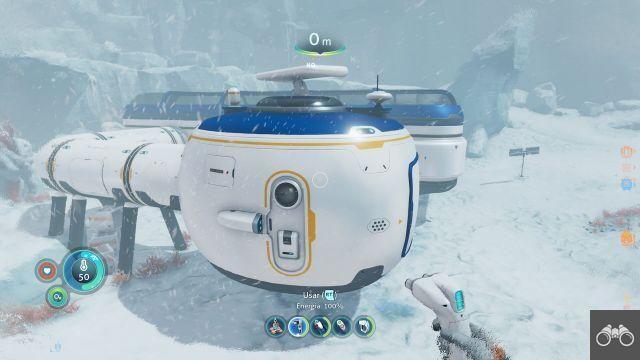 Compared to other survival games, with the tedious search for resources, Subnautics: Below Zero makes these tasks fun and, if you know where to look, pretty quick. There is logic and consistency in this ecological world. In the vast majority of these games you will have to learn your surroundings by head, as there is no map available. This may seem confusing in practice, but it's rewarding. The sooner you figure out where each biome is and what makes it different, the sooner you can establish a more permanent platform and create vehicles for longer expeditions. 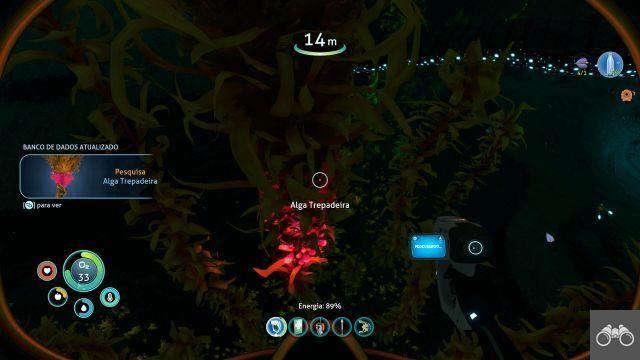 On your PDA your objectives will rarely appear automatically, many of them will appear as you reach a certain region or get data scattered around the map.

One thing that always catches the eye, and is always used for demonstrations of monitors and screens, are videos of the underwater world. Subnautics: Below Zero is a great example. The settings and biomes are very immersive, with lots of color and contrast, resulting in amazing landscapes and creature designs. From lush forests of kelp to deep blue gelatin fields to purple hydrothermal vents and unsettling cave systems, the scenery begs to be fully explored, and the “WOW” factor never wanes. 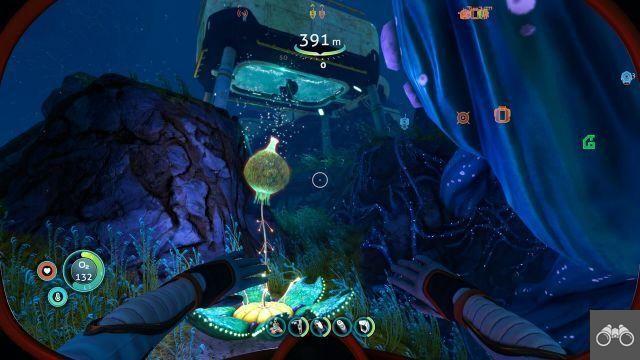 The game has a version for the Xbox Series X | S through the Smart Delivery feature, offering options to choose performance focused on quality (resolution) or fluidity (FPS). 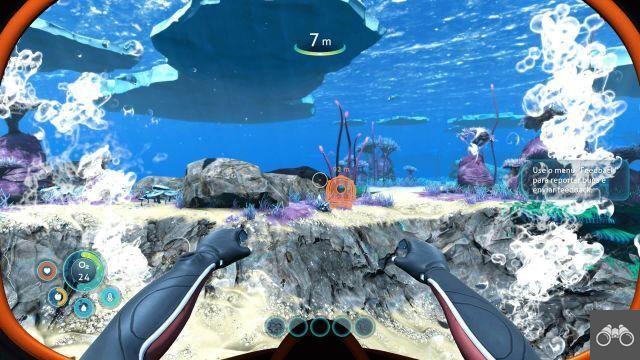 As you explore, you will find several well-grouped and distinct regions, making navigation and searching for resources easier. Your search takes place a lot through the submerged world, but there is also a need to explore locations and land bases. Soon, you will need to better develop your outfit and equipment, finding other scenarios with lots of snow, and of course, lots of caves to escape the cold. As well as the aquatic world, the flora and fauna of these places are peculiar. Vehicles will be of extreme necessity for displacement and survival. Try to get them as soon as possible.

TWO GAMES IN ONE

Subnautics: Below Zero it has a lot of survival at its core, but the way it is presented, it also fares well as an exploration and construction game. It ends up being two games in one, without even considering the base/habitat assembly part. There are so many options that you can easily spend hours and hours exploring the areas and leaving the main objective aside, because there are no navigation and mission assignment facilities, in a survival style.

The narrative, while not entirely linear, as it depends on the order of your discoveries, encourages you to explore and discover what really happened to your sister, and the context as a whole. By the way, if you want to delve into the game's universe, I recommend visiting the Wiki with game content, listing species of animals, plants, minerals, items and resources. And why not tips, since you will be on your own.

The graphics are very well balanced and with vast scenarios. Following the objectives you should spend around 10 to 15 hours, but you will certainly adventure for much longer if you explore your full potential.

Subnautics: Below Zero It has English audio with subtitles, text and menus in Portuguese. There are some mistranslated words, but nothing that gets in the way of setting and exploration.