Super animal royale is a free-to-play, top-down 2D Battle Royale style game in which the player who survives the battle against up to 64 adorably murderous Super Animals wins. It is developed by Pixile Studios and distributed by Modus Games.

Select your favorite cuddly animal from foxes, pandas, kittens and other bloodthirsty beasts. Then, parachute into the ruins of an ill-fated safari park and fight a lethal barrage of bullets, explosives and silly dances. Options abound. With a good amount of maps, the island world has an incredible diversity.

The mechanics are very simple, if you've already battled in Battle Royale style games, you'll get the hang of it fast. The difference is that instead of being FPS or third person, Super animal royale has the shoot em'up vision, it's shooting, punching and bombing for all sides. Like the other free-to-play games, it has many options for customizing your character: from the chosen animal, through clothes, accessories, dances and, of course, weapons. There are many options available.

Every second that passes, the map decreases due to the advance of a poisonous gas along the edges, forcing players to move, and even run, towards the center of the map. There are several abandoned structures to explore and loot, where you'll find weapons, explosives, and health juices. Combined with the fog of war, which restricts the line of sight, combat becomes strategic, in the best safari style, in which only one predator can reach the top of the food chain.

Matches don't take long and matchmaking is generally pretty quick. The stages are short and the gas circle closes quickly, providing quick movement, even with vehicles that can be used as weapons, such as the hamster ball or giant emu. The waiting time for respawn is short, which changes the dynamics of the game a lot, since death is not so punishing, you end up not wasting time wasted accumulating loot, etc. So you are lighter and freer to hunt the other cute animals without worrying so much about killing or dying. 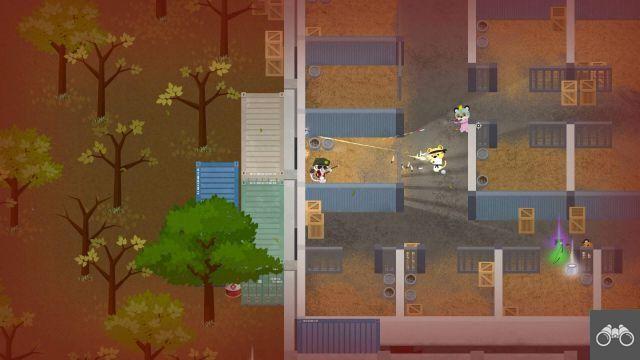 There are several options for ranged weapons, such as pistols, machine guns, rifles, sniper rifles, bows, shotguns, as well as weapons for close combat, which can be literally almost anything from a katana to a lollipop. It's up to you to choose which best suits your style of play and tactics for the map. Indoors, the shotgun is shot and dropped, for example.

Generally, free-to-play games have additional activities for players to obtain cosmetic items, in Super animal royale, you have the research lab and the targets. In it you manage your advances, allowing you to work on new animals, clothes, skins. With one great advantage: they never expire. There are content passes that are sold, quickly releasing a wide variety of options. It's the way they found to make money from the game. 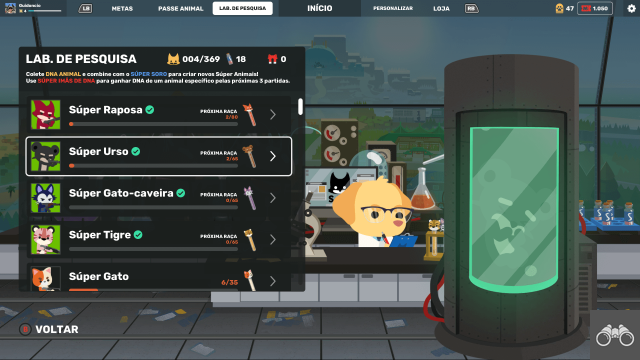 Goals are simply tasks you need to complete to unlock a new cosmetic. The variety of landmarks you can pursue is wonderful. Some just require you to play. And the more you play, the more skins you get. Others require you to kill with specific weapons. In return, you get new skins for that weapon. Some are incredibly challenging, like winning a game without armor or with just a melee weapon.

The Research Lab is where you unlock more cute and killer animals. Each match you play earns you Animal DNA reward for a specific type of animal and Super Serum. Once you've collected enough serum and DNA for one type of animal, you can craft one of the family's skins. These systems are great, because while you're working on improving your goal, you're also working on other things. It's a win-win! 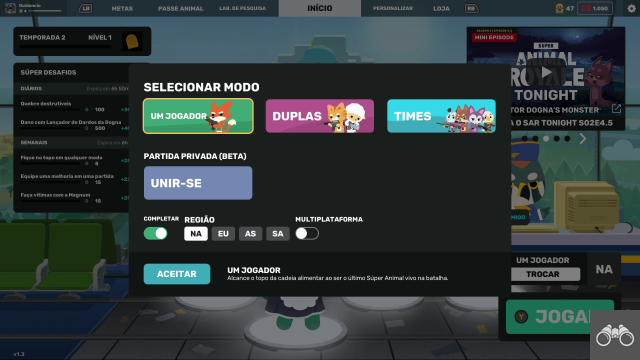 You can play solo or in pairs against 64 players or play in teams of 4 people. With the second season, cross-play was introduced for teams, making the player audience even bigger.

Additional content via DLC and edits is paid, but only aesthetically alters the player, there is no competitive advantage. The addition of content is quite frequent and it is already in Season 02, adding a new animal, a new map, e.g. clear. lots of skins, weapons and dances, in addition to the long-awaited team cross-play.

Super animal royale It's very dynamic and fun. With a huge variety of weapons, characters, maps, skins and dances, after all in a Battle Royale, the Dance of Victory is always the end goal isn't it? The mechanics of quick matches and very little waiting for respawn, deliver a very cool dynamism, in which death doesn't feel so punishing. Paid content only adds aesthetic content, which is beneficial to the player ecosystem, preventing the most rewarded from being the players who invest the most money. The game has menus and subtitles in Portuguese.

With cute animals and lots of variety, it's a great choice for entry into Battle Royale games.

It has an official Fandom Wiki with various information, curiosities, etc., visit the site.