Análise – Curse of the Dead Gods

One of the main genres that has grown in recent years is Roguelike games, these works make the player leave their comfort zone, with increasingly difficult challenges. This type of gameplay has been incorporated into hundreds of genres, best classified as a subcategory.

For those unfamiliar with the Roguelike genre, it is part of the RPG genre, but with the difference that the stages are randomly generated. In addition, permanent death is quite common and is part of the foundation of this RPG subcategory.

With a wide variety of highly rated games, it has become even rarer to find a work that stands out among the rest. Curse of the dead gods is one of those games, which sought a differential to find its space.

Developed by Passtech Games and distributed by the giant Focus Home Interactive, Curse of the dead gods takes players to random dungeons full of dangers.

Does the game have any differences or is it more of the same?

Curse of the dead gods It has a very interesting phase scheme, in which the player chooses which way to go. These routes affect the items that can be found, as well as the difficulty of each leg. The big X of the question is for the curse bar, which as we take damage, or take an item with a high cost, it fills up, making the game more difficult. So, I believe that being cursed is one of the biggest problems for the player, who will have to choose the best route or sacrifice himself to get more powerful items. This is a big dilemma that you will face.

Returning to the dungeons, they are quite varied, full of traps and randomly generated. Each section contains a different number of enemies and variations, which will challenge you at all times. As you pass a room, you must choose the next, and this is illustrated on a large map, which has legends for each type of bonus or treasure the player can risk. 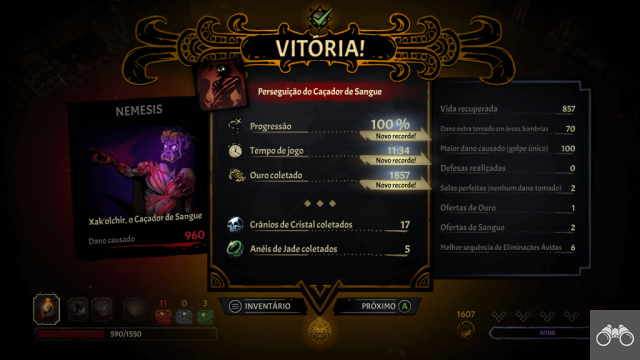 At the end of the dungeon we face the boss of the level, which is usually quite a challenge, especially if you've given in to some curses. The fight takes place in a large arena, where you will be tested against a very powerful enemy.

Speaking of enemies, the variety is quite large, and this makes the player step out of his comfort zone. As we progress, on higher level expeditions, the enemies get smarter and stronger.

A big plus point of Curse of the dead gods are its daily events, which feature very challenging boss dungeons. These stages have pretty powerful rewards, so it's something we should strive to win. The only catch is that these events can only be completed without dying, so lost, just another day to try again.

As I said at the very beginning of this review, the Roguelike style is very present, even becoming the backbone that drives all gameplay. This aspect is incorporated from the first minutes and will be understood by the player, right after the first kills. yes, in Curse of the dead gods death is something very present and part of learning.

During our expeditions we collect some elements, which in the next life will be used to buy new weapons, items and passive skills. This aspect, inspired by games like Dead Cells, is very interesting for the player to feel that he is evolving with each game, in addition, of course, to give the game longevity. 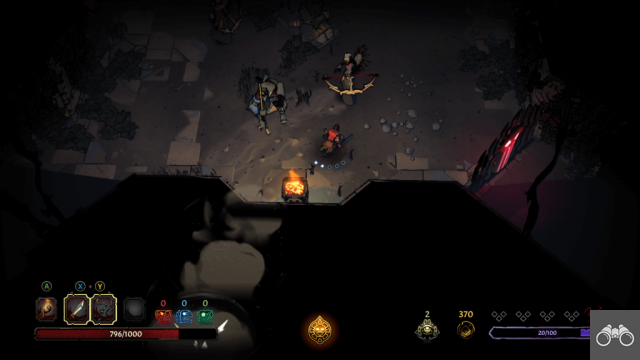 Keep an eye on the stamina bar so you don't get in trouble.

Speaking of weapons, there is a wide variety, from long-range and short-range secondary weapons, to two- or one-handed primary weapons. These weapons, which are purchased with each kill, are placed on altars that randomly generate a combination of weapons at the start of each expedition. The more weapons the player conquers, the greater the chances of success.

Curse of the dead gods It has an isometric camera with very simple commands, focusing on gameplay. The protagonist has attacks with the primary and secondary weapons, which can be made stronger with the option to hold the button to deal more damage. A third special weapon also enters this formula, which when mixed together can create incredible combos.

In the defensive part, the player can dodge blows with the roll and defend with the parry, which I found a little problematic, sometimes spoiling the combat. 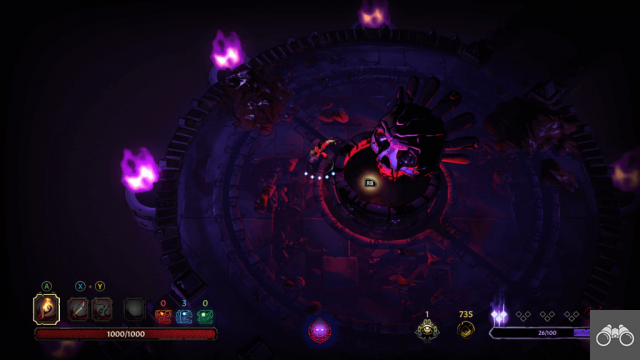 Another important point of the gameplay is the use of lighting, usually the dungeons are dark, so we must use our torch or trigger buttons on the floor to light up the place. Darkness adds more power to dark forces, so it's good to light up everything you can. Light is also important to help us dodge traps.

The graphics have a cartoonish art style, with very dark color palettes, which make the dungeons look even more menacing. The design of the unique enemies blends in well with the settings. The performance is also very good, and even with many enemies on the screen the game doesn't stutter.

The sound meets perfectly, with a track that mixes with the darkest gameplay. Curse of the dead gods It has subtitles in Portuguese from our country, with localized menus and texts.

Curse of the dead gods is an addictive game that changes every game with its randomly generated dungeons. As we advance in the rooms, we are challenged with many dangers, especially in the curse mechanics that change the dynamics of the game.

The gameplay is also enjoyable, mainly in the use of primary and secondary weapons that can be mixed to create powerful combos. Daily events are very interesting, mainly because they take the player out of the comfort zone with very dangerous challenges.

Curse of the dead gods It is recommended for those looking for a challenge, mainly because it brings a good mix of some known elements that merge into something new.

add a comment of Análise – Curse of the Dead Gods