Looking through my old archives, I found a preview of an analysis of Dante's Inferno, which is one of the hack and slash style games that I enjoyed playing the most, and that now, thanks to the incredible Xbox One backwards compatibility system, it can now be enjoyed on the Microsoft console and also by EA Access subscribers, another great service from Xbox One.

Dante's Inferno brings to games its version of one of the greatest classics of world literature, the work of Dante Alighieri, “The Divine Comedy”. The Visceral Games game features a dense narrative, full of action and lots, lots of violence. Which is not to be scared because the plot takes place in hell, and it's where the protagonist goes to save his beloved from the devil's own clutches.

Shall we revisit this great classic?

As mentioned above, the story of Dante's Inferno is fully inspired and adapted from the middle ages poem “The Divine Comedy” by Dante Alighieri. Our character is Dante, a Crusader, who got into some less than honorable situations during his missions, with some of these slips having a direct effect on the death of his beloved Beatrice, whom he planned to marry. Upon returning home he finds her body on the ground and being carried to hell by the devil himself.

Determined to redeem himself from his mistakes, and then try to save Beatrice's soul, Dante will face all hell and destroy all the demons that get in his way until he reaches his goal. For this he will have to go through the nine circles in which hell is divided: Limbo, lust, gluttony, greed, anger, heresy, violence, fraud and betrayal. 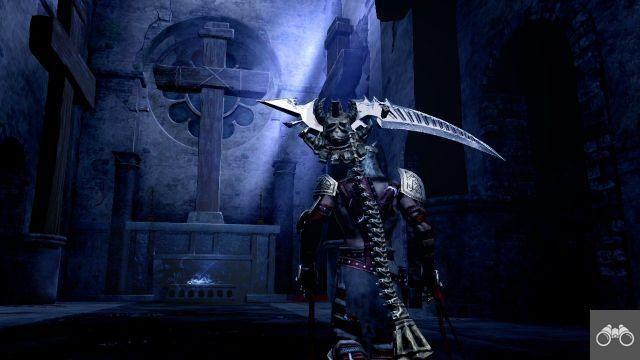 And to make it even more dramatic, Dante has his own sins sewn into his skin to remind him of his mistakes. But the character is not alone in this arduous journey, as he has Virgil, who guides him through these 9 circles of hell.

The story is really engaging and brings very good nuances not only of Dante, but also of the entire universe that surrounds him, being practically impossible not to get involved with everything that happens on the screen. The game is also very clever in telling this narrative, mixing high-resolution cinematics with animated sequences that give a unique tone to what is being told to players.

The game also received an animation that tells more details of this whole tragic story, and which was named “Dante's Inferno An Animated Epic”.

Dante's Inferno it's totally focused on the unbridled action of good old hack and slash, something that Visceral's game does very well. To help in this whole journey, Dante has at his disposal two weapons that have opposite essences: a Scythe that was from Death and a Cross that was from Beatrice. Each one of them has its own characteristics and usefulness in each moment of combat, in addition to symbolizing the conflict between light and darkness that the character lives. The gameplay with both is excellent, and the possibilities for combos are huge. Overall it's the kind of game that makes you want to look for combat to get into.

Enemies are hostile, as it should be in a place like this, and offer a great challenge, the most common are the super-challenging stage bosses, which require not only skill, but also observation of the scenario, as it is not enough to just hit, it is necessary some sort of strategy for the toughest battles. Dante's Inferno it also has several puzzles, but they don't offer much complexity, which I missed, because it could make the gameplay more complete. 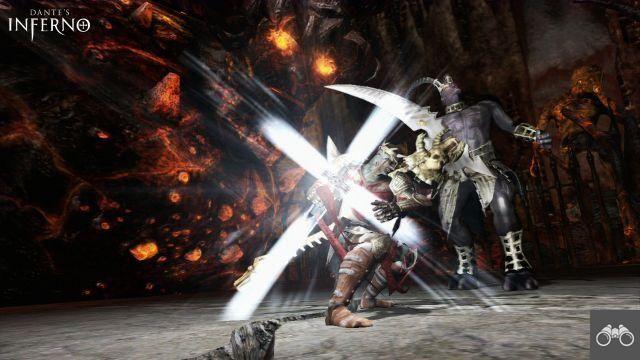 Another factor that has a big impact on gameplay is the Holy or Unholy skill system. At different moments in the game we can choose between eliminating our enemies or forgiving them, and according to our choices we will earn points in each of these skill trees. Each of them have unique abilities for Dante, such as magical powers, or increased health, mana, attack, defense… Another difference is that each one of them is directly linked to the weapons we use. Holy for Beatrice's Cross and Unholy for the Scythe of Death. So the player must think carefully about each step taken in hell, as they directly interfere with the gameplay and the skills that can be used.

It is also possible to kill the drivers of some huge enemies that appear and thus take their place to use the crossbow and thus destroy everything around you, which brings a very good variable to the dynamics of the game.

And of course, as in many games of the genre, Dante's Inferno it also has its moments of QTE (Quick Time Events), that little system of pressing the buttons that appear on the screen at the right moment. Although they inserted this into the game, I feel that if they didn't exist, they wouldn't be needed, their removal would make the title have more personality. 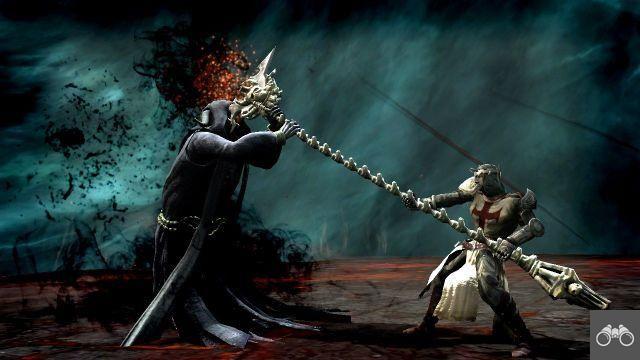 Dante's Inferno is full of collectibles, which is a full plate for those who enjoy looking for secrets and collecting objects. Some of them give some special bonuses and others are just for collecting. There are also sources of health, mana and points scattered around the maps.

Dante's Inferno was released in 2022, and playing it today leaves us with the impression that it hasn't aged well at all, but even playing it some time ago it already left me with the feeling that it lacked a certain polish in the textures and backgrounds. However, none of this takes away from the general beauty of the created universe or hinders the gameplay. These are just details to look out for. The scenarios are full of Gore, which brings a sense of discomfort, something that works perfectly with the narrative told. So get ready for some really tough scenes.

The game's performance is incredible and brings a lot of fluidity with its 60fps, something essential in a game of this type, as it makes the gameplay looser and the animations more natural. 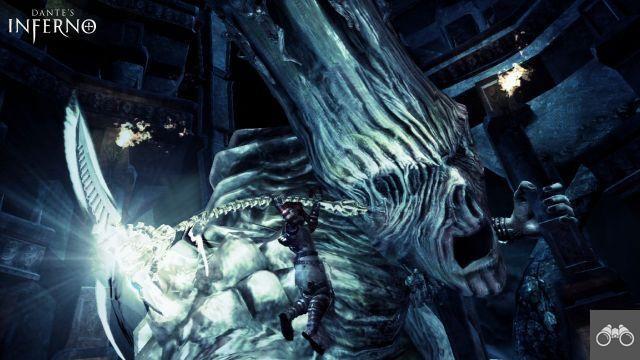 The soundtrack is very good and brings all the feeling and intensity that the plot deserves, being fitted with mastery and at the right moments. It was composed by Garry Schyman of Bioshock and Paul Gorman of Neverwinter Nights. The voice acting in the game is very good and the voices match the characters well.

Unfortunately, like most games at the time, Dante's Inferno It doesn't have subtitles in Portuguese, which spoils the immersion of those who don't know at least the basics of English, Spanish or French.

Dante's Inferno is without a doubt one of the best hack and slash games I've ever played, Visceral's game has an action pace that's practically perfect and combat is so good that it makes us look for trouble in every corner of hell. Add to that a well-developed universe and an extremely immersive and heavy narrative, to result in a highly recommended game for those who enjoy a lot of action, but who also have a strong stomach, as the themes dealt with are heavy.

Despite having some technical problems, such as some poorer textures, the whole work of Dante's Inferno is much more relevant, which makes it a must for lovers of the genre.

It is worth remembering that the game is already available in Xbox One backwards compatibility and is also released for EA Access subscribers.