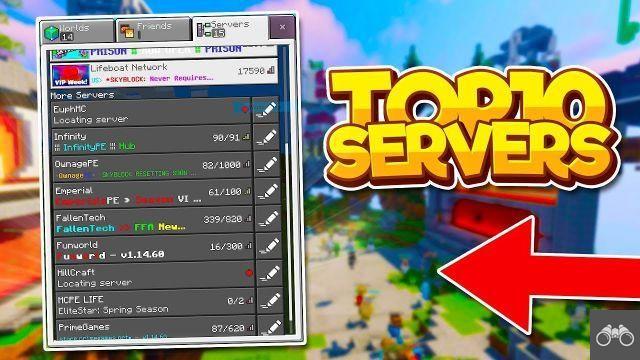 The Minecraft game offers a lot of freedom when it comes to choosing your favorite play mode. This is even better for those who like to play with other people, as the multiplayer mode allows access to several servers created by other gamers – each one of them being unique in their style, modes, objectives and minigames. There are endless possibilities and ways to have fun: you can, for example, recreate scenarios from your favorite movie or sights of your city in a fantastic way!

To help you find a space in the game that's perfect for your goals and fun, we've listed the 20 best Minecraft servers for PC in 2022! It is important to point out that maybe some of the IP's are not up to date.

If the Minecraft universe is new and you don't know how to access other players' servers on PC, save this tutorial:

And it's done! See how fast it is? After joining the server, it will load. If you happen to get an error message, don't worry, as it probably has something to do with a technical server issue (temporary or otherwise).

How do we start this list without putting the world's most popular server first? If you're a die-hard Minecraft fan, you probably know Hypixel. Its popularity comes from many years of gaming – specifically 7 – and even with that long, it doesn’t lag behind and remains among Minecraft’s busiest servers. Its minigame possibilities are endless and attract the most varied players. Among them are the famous Skywars, Bed Wars, The Hunger Games and many others. It acts as a great source of subservers, for all tastes. In addition, it also has a Survival mode for those who don't like to play with so much action.

Think of a huge server full of things to do! With it, you have access to FPS games, paintings, the very version of Smash Bros and many others… It will be hard to think of a type of game that is not available in Mineplex! In addition, their team is very active and is always alert to possible bugs and inconveniences.

Autcraft is a server designed for children and adults with autism. As such, he is a safe haven for those who are uncomfortable with some things found on other servers, such as no scary characters. To access it, you need to sign up, but nothing more. The performance is ok, but it's nice to know that people with autism have a safe environment in this very popular game, isn't it?

We are now talking about the most ambitious Minecraft server. Intended to be a replica of Earth, EarthMC is literally giant and allows you to travel through the planet's main cities, which have been carefully recreated. Go to Rio de Janeiro, London, Paris and New York to have fun and make new friends. If you like more adrenaline and want to achieve great things together with other players, EarthMC also offers a focus on Survival mode, in which you can choose the country you want to start in to join other players and build communities.

For Game of Thrones fans! The series came to an end in 2022 and, despite its split ending, we can't deny that the fictional medieval world has enchanted everyone - as well as the interesting and bloody plot. If you want to miss Westeros and the seven kingdoms of Game Of Thrones, go to WesterosCraft and try to be king for a day! The server is not completely finished yet, but there are already numerous activities and paths to go before winter arrives!

Want a server dedicated exclusively to PvP? Then go to PvPWars now! Although it doesn't have a Survival mode, it has several different minigames from Skyblock and Factions modes for you to enjoy. All of them are competitively oriented and have an overall leaderboard as well as an economy system that is based on player performance. Great option for competitors!

Do you like to browse? So don't hesitate to access Pirate Craft! Although navigation is not very easy in the game, the server is surprisingly good and works very well. Navigating a ship in Minecraft is tricky, but in Pirate Craft they do a surprisingly good job of making it work. In addition to having fun exploring and getting to know the ships – which are huge, you also have the opportunity to be present in incredible combats with other navigations. Watch out for looters!

For RPG lovers! WynnCraft is considered one of the biggest Minecraft RPG servers with an average of 1000 concurrent players per hour. The server is very complete when considered an MMORPG, with quests, purchases and sales, classes, dungeons, level system, equipment, mounts, secret content and much more. If you feel motivated by the background stories, WynnCraft will please you a lot, as it has a lore behind the quests!

We don't even need to explain what it's all about… To win the hearts of Potterheads once and for all, Potterworld is a server completely inspired by the boy wizard saga. Be part of one of the four houses of Hogwarts, duel with your friends and enemies, play Quidditch, attend the most magical classes and embark on a divine exploration through the environments of books and movies. This server has a very large community, so you can make lots of friends during your adventures!

Just as we have Harry Potter and Game Of Thrones servers, there are also servers inspired by the greatest zombie series of all time: The Walking Dead. The most famous of them is The Mining Dead, in which the main focus is to unite with other players and fight for survival in a post-apocalyptic world, full of zombies crazy to get you. Don't think it's going to be easy: PVP is activated here, so it won't just be the undead your only concern. Protect your life and resources to secure your loot. The Mining Dead also has several equipment kits inspired by the characters from the series, as well as recreated locations such as the Prison, Alexandria, Woodbury, etc. So, will you face the challenge?

For those who are not content to play Minecraft in one way! LemonCloud is a server with thousands of active players every day, as it has an equally large variety of game modes. It caters to fans of Survival, PVP, PVE, RPG, Prison, Factions and even The Hunger Games! Of all the available modes, Skyblock is the most prominent among gamers.

Another server for pirate fans! Want to build your own ships? Embark on amazing adventures with other players? Explore the world by sea? Then PirateMC will surprise you! Despite being a mostly Survival server, it also has PVP and allows you to participate in battles between ships and crews, act in the defense and attack of forts and become a great pirate!

Despite being near the end of our list, SkyBlock is not among the last favorites among Mincraft players, as it is considered the best server for SkyBlock fans. In case you didn't know, in this mode everything starts on a floating island, on which your duty is to survive - even if with few resources. The server has thousands of players daily and has a custom plugin, which has many island options for you to play alone or with friends.

During the pandemic, we went a long time without being able to attend an amusement park, right? Now that desire can pass with the help of MCParks, which offers a series of recreations of the most famous amusement parks in the world – such as Disneyland, Disney World, Universal, etc. The server has a wide range of mechanics inserted by mods and plugins, making the game more and more interesting and surprising, without falling into monotony. The server also has custom parks created by the owners, as well as allowing players to build their own.

One of the biggest servers today, Extreme Craft has several game modes, from simple multiplayer to Skyblock, Prison, Eggwars, Hide and Seek, etc. It could even be a server like the others, however, its biggest differential is the engagement of the community of players, who are always creating and participating in amazing events, competitions and dynamics. The server also has an “Anarchy Mode”, in which players are free to play each their own, as they see fit.

For all lovers of successful movies and series! Havoc MC is a server that has a collection of modes based on famous franchises. One of them, we have already mentioned in this list: the Mining Dead, inspired by the series The Walking Dead. With it, you can play PvP, PvE and various survival elements. If you're not a fan of The Walking Dead, look no further than Havoc MC for modes inspired by your favorite franchises – like Star Wars, Warzone and even GTA! Just look to know which servers are in development.

Did you think we were going to leave our countrymen out? Craftlandia has been around for almost a decade and today it is considered the biggest server in our country of Minecraft. The biggest highlight of the server is the survival mode, which offers its own economy system, skills that are not in the traditional version of the game and daily events to encourage interaction between players and our countrymen, not to mention the system of clans, skins and PvP arenas.

Another server is our country, or rather, the biggest Minecraft server in the country! In addition to a huge variety of minigames, the developers of this server were concerned with providing a good structure to host different rooms, thus reducing possible lags and overcrowding of players, making the experience very pleasant and fluid. Among its most famous minigames are Hide And Seek, Gun Game, Paintball and Dragon Escape.

Do you like to duel with other gamers? Then this is a server that will please you a lot! Fully geared towards fighting between players based on clan role, Gontroller Factions PvP promises war and the like at all times. Ideal for those who enjoy a more aggressive game.