The best Android games are defined annually by Google through the Google Play Awards. According to the company, the award "highlights developers who pursue quality and drive innovation" in the operating system.

For those who like to have fun playing on their smartphone, has gathered the best Android mobile games selected in the last edition of the awards, separated by categories. Check out! 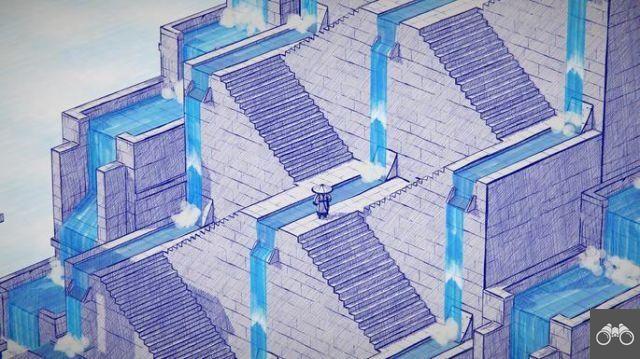 Inked tells the story of a samurai who has to face several setbacks to save Aiko, the love of his life. In the midst of the process, he will have to face dangerous situations and make questionable moral decisions. In all, there are more than 60 puzzle-style challenges to solve.

All this in a magical, hand-drawn ballpoint pen setting. In addition to the amazing graphics, the game stands out for the soundtrack and narration. 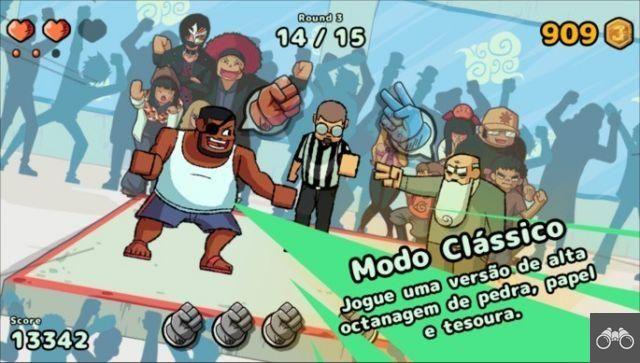 Yes, the rock-paper-scissors game (also known as jokenpô) won a mobile version. JanKenUP! turns the dispute into a real battle.

Each competitor takes one side of the ring and it is possible to choose to play in Classic and Frenzy mode (time against the clock). The game even allows you to challenge your friends or random people online. The dynamic is more fun than you can imagine!

Pokémon UNITE is a strategic game where you can face off against competitors from all over the world in 5v5 battles. The story takes place on Aeos Island, a magical place where Pokémon are even more powerful.


It is possible to fight against opposing or wild Pokémon, collecting the energy of rivals. The team that collects the most points wins. With each victory, the player gets rewards such as unlocking new characters and outfits. 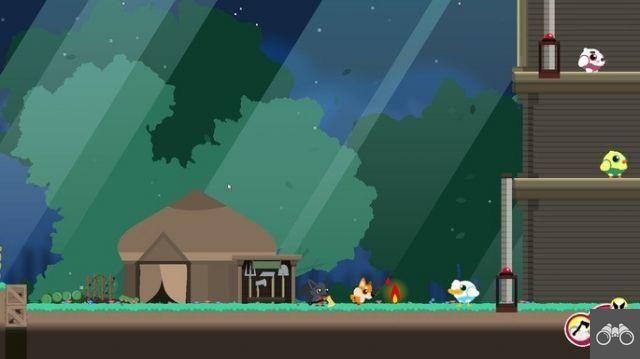 Sixit is a narrative puzzle game where you live as a mammal named Pep. Each round, the player has only six actions to perform, with the aim of saving the village he lives in from a major storm.

Only one being managed to stop the storm, the dragon Mitera, who has been resting ever since from this hard battle. It's up to Pep to wake him up. He asks for help and talks to the other villagers to find out how to do this.

Unmaze values ​​originality and creativity, using the cell's light sensor in the gameplay. In this game, your role will be to help two young people trapped in a maze, but the mission is more complex than it seems.

If you're in a bright environment, you can guide Theseus. In the dark, you should help Asterion. However, the closer one of them is to the exit, the more the other will get lost. Will you have the ability and skill to save them both? 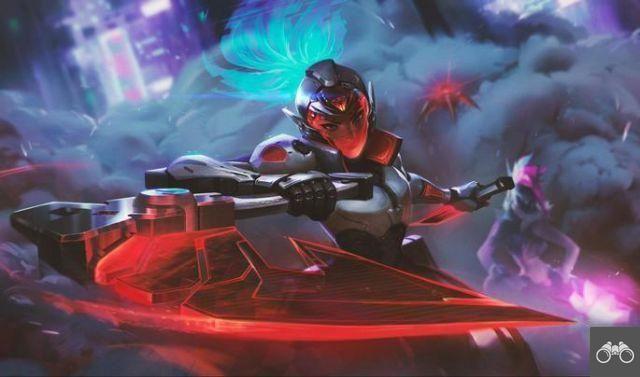 League of Legends: Wild Rift features the same dynamics as the acclaimed League of Legends, but was developed especially for mobile devices. Therefore, it has optimized controls and runs more fluidly on mobile phones and tablets.

The player needs to choose a champion to become a legend and become the champion of champions. For that, you'll have to face epic 5v5 battles, exploring your skills to the fullest and, at the same time, being strategic.

It is possible to play online in co-op mode with your friends, in pairs, trios or groups of five. 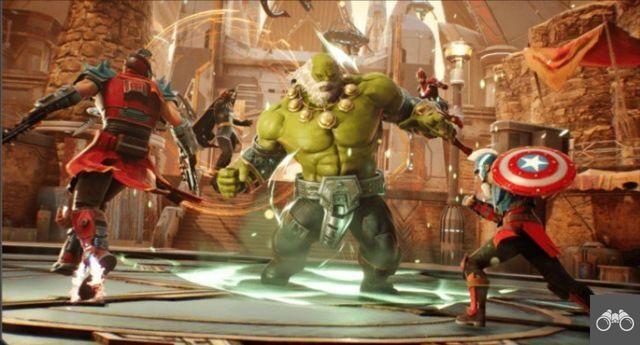 MARVEL Future Revolution is the first open-world action RPG in the Marvel universe for mobile devices. Through immersive 3D graphics, it is possible to feel in the shoes of heroes such as Spider-Man, Iron Man, Black Widow, Captain America, among others.

Get ready to face a series of challenges hidden in the Dark Domain in one of five game modes. In Lightning War, a team of 4 heroes must face Marvel's worst villains. In Space Operation, the dispute is between the superheroes to find out which one is better.

There are also Raid, Omega War and Dimensional Duel modes. For those who enjoy the thrill of playing online, the title offers real-time cooperative mode. 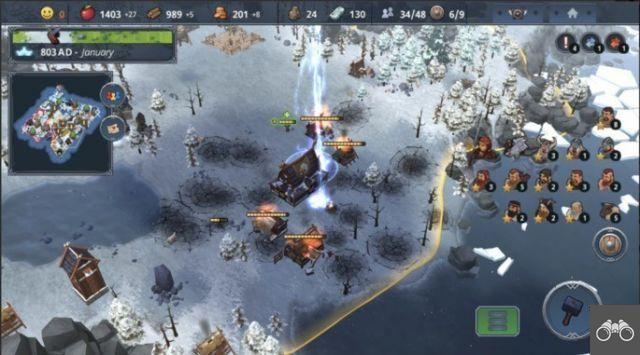 Northgard is a strategy game in which you play the role of Rig, the son of the High Viking King who was murdered and whose royal horn was stolen. To save his clan's throne and reputation, the boy will have to face the challenges of the newly discovered continent of Northgard.

The fearless viking will have to conquer new lands, create his own village, manage wealth, distribute functions, among other activities. Added to this, he will need to face zombies, giants and wolves, as well as make friends and partnerships.

At the end of the 11 stages, you should have mastered the skills of the six clans in the game. You can play cooperatively or competitively online with up to six players. 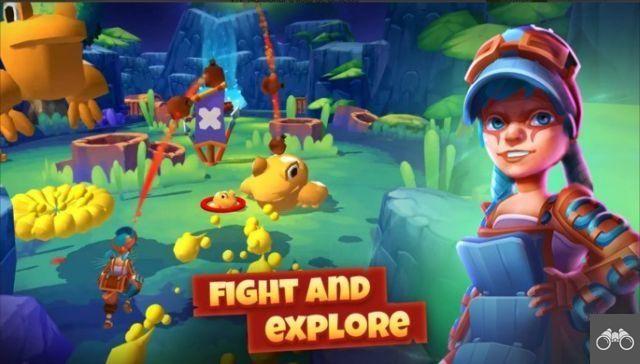 Rogue Land is a roguelike game that uses classic RPG mechanics, with evolution of skills, weapons and battles. In it, you take on the role of a lone hero who enters the fight against monsters sent into the world by an evil force.

Your goal is to exterminate the source of evil. But to get there, you'll have to face various challenges, defeat hordes, take down bosses and collect treasures from downed enemies. 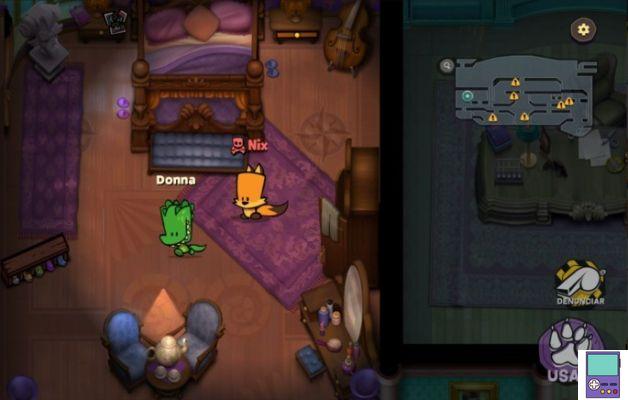 The classic Assassin game won a smartphone version. In Suspects: Mystery Mansion, it is possible to play online with up to 9 people to solve a crime.

Keep an eye out for clues, such as the location of the body, where each player was, what they said they were doing, and other information. As a group, you must find out what happened.

But beware, the killer is among you. Each round, players must try to find the criminal by talking through the integrated voice chat. After the debate, everyone should vote for the suspect. 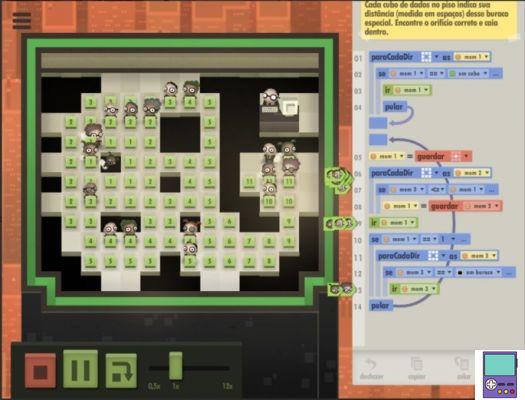 7 Billion Humans is a programming-based problem-solving game. As the supervisor of a factory housing the last humans alive after a robot uprising, it's up to you to tell them what to do. For this, you will have to program the instructions.

As with any learning process, initially, requests will be simple. As you progress (in the game and in the programming), you will have to give more complex instructions. 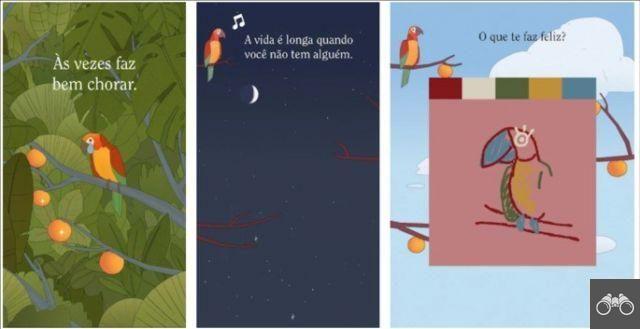 More than a game, Bird Alone builds a friendship between you and a lonely bird. Together they can draw, create songs and poems.

Start each day with thought-provoking questions such as “Do you fear death?” or “What makes you happy?”. It's an exciting and innovative experience lived through beautiful graphics. 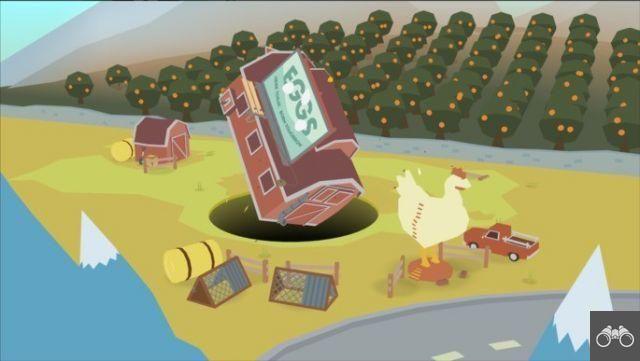 Originality is not lacking in Donut County. In this physics puzzle game, the player lives in the skin of a hole in the ground! Your goal is to end the city by "swallowing" everything in sight.

At first, you are just a small hole, able to catch small rubbish, grass and pieces of paper. As it takes what it can to the center of the Earth, its radius gets bigger.

Along the way, you can make random things like soup or raise rabbits. Or, expel objects back, to help you solve challenges or just to cause chaos in the city.

14. My Friend Pedro: Ripe for Revenge

My Friend Pedro: Ripe for Revenge | Play Now for Free

Your friend Pedro is a talking banana whose wife and children have been kidnapped and he needs your help. His mission will be to face these criminals through 37 stages, juggling action movies to get the shots right.

The courses can be covered on foot, by motorcycle or skateboard and, as you earn points, you can purchase new equipment (or buy them with real money, if you prefer). The frenetic pace combined with the soundtrack give the game an extra touch.

Puzzling Peaks EXE is a physics puzzle that requires logical thinking and quick thinking to move the spherical hero Knightly through different scenarios. Get that ball rolling with the help of an AI guide and an administrator named Jasmin.

As the character cannot move on its own, the player needs to have good reflexes to move items in the scenario and move the hero in the right direction. The game has a 16-bit style look and offers over a hundred levels. 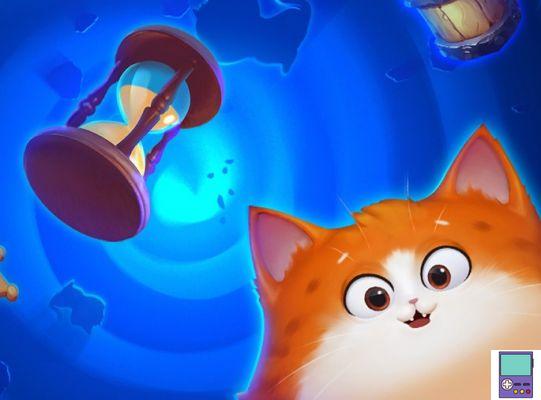 Cats in Time is probably the cutest game you'll see today! In this game, you'll have to help a scientist rescue his cats. The careless professor let his cats play in the lab, which activated the time machine and ended up traveling through time.

There are more than 200 cats spread around the world and for different times. Search for them in futuristic Japan or ancient Egypt. To find them, don't just look. You have to solve puzzles to free the animals. 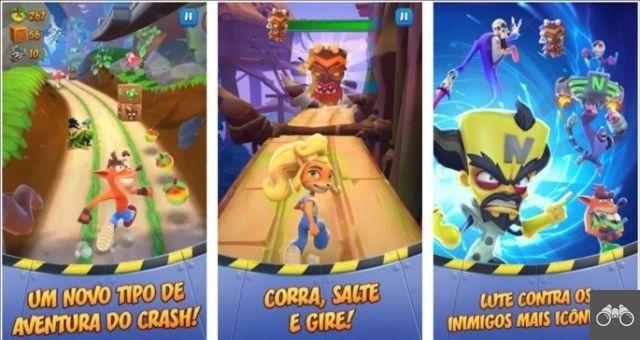 Crash Bandicoot: On the Run! is an action game developed by the creators of Candy Crush. In this endless run style game, you'll have to dodge and jump obstacles, as well as collect weapons and abilities.

Face bosses, explore different locations and, as you evolve, you can unlock scenarios, character skins, among other features. 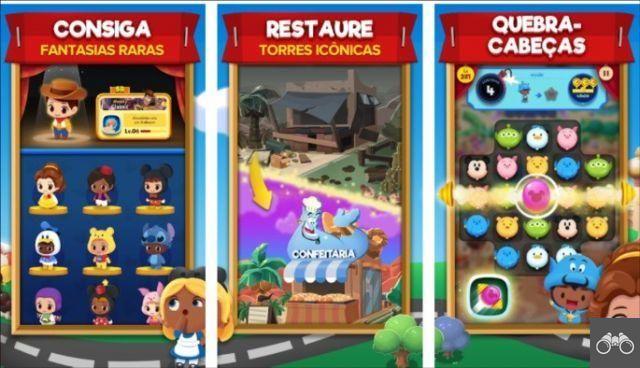 Disney POP TOWN is a match-three game set in the magical Disney universe. By solving the puzzles, the user earns points.

Points can be used to collect Disney and Pixar character costumes. You can also explore and build cities and restore iconic locations. 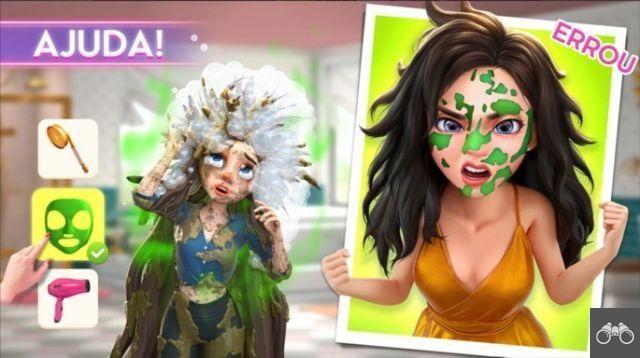 Project Makeover mixes the dynamics of match-three games with fashion and decoration games. By beating challenges and puzzles, you earn points to make incredible transformations in people and places.

The characters are your customers and, just like in real life, they have different personalities from each other. That is, you will have to deal with dramatic, narcissistic, hard-headed types and try to help them as best you can.

Bath, make up, comb, buy clothes and accessories. Renovate establishments and decorate each of your customers and be proud of your work.

In Switchcraft, your mission will be to unravel the mysterious disappearance of a friend. For that, she will have to use her magical match-three skills. With each puzzle solved, part of the story is unlocked and the closer you are to finding it.

It is worth mentioning the beautiful graphics, the engaging narrative and the decision-making that can change the course of the adventure, in the best RPG style. Score points, collect clues, follow instructions and help find the girl. 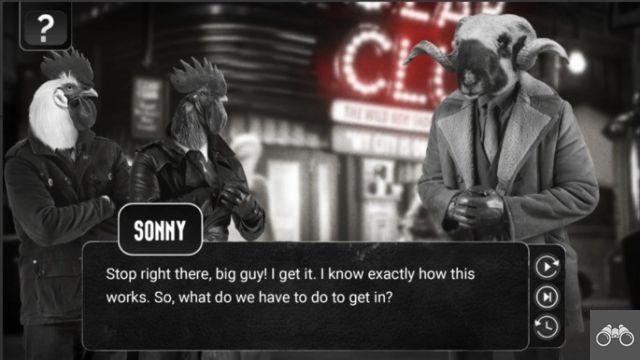 Chicken Police – Paint it RED! stands out for its 40s film noir aesthetic and unusual characters. The protagonists are a pair of roosters, failed detectives, who return to work to try to unravel the biggest mystery of their careers.

To solve the case, they must collect clues and evidence, in addition to interrogating dozens of characters, all animals. The dynamics includes 30 different scenarios, which can change throughout the investigations.

In addition to Chicken Police, the games My Friend Peter: Ripe for Revenge e League of Legends: Wild Rift were also chosen in this category. 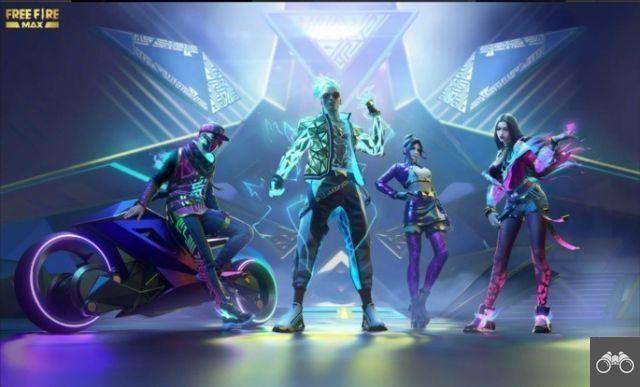 Garena Free Fire MAX brings the famous Free Fire dynamics in high definition. In this Battle Royale, your objective is to be the only survivor among the 50 players that land on an island, literally, by parachute.

It is possible to play individually or in teams of up to 4 people. Communication with your squad should be done through an integrated voice chat. To survive, you need to collect weapons and supplies and, of course, eliminate enemies.

Developers guarantee compatibility of Free Fire accounts with Free Fire MAX. Thus, your progress and items can be accessed in an integrated way in both games.

The 5 Best Free Voice Recorders for iPhone and Android ❯