Real-time mobile voice translation looks like futuristic technology. The feature, however, has been around for some time. Google Translate is one of those applications capable of interpreting conversations from Portuguese to English (or several other languages) with a simple press of a button.

Instant translation can be very useful to establish live chats with people from different countries. The tool also works as an ally in the studies of those who are learning a new language.

The app is also capable of interpreting images, isolated audios and even manuscripts. In addition, it is possible to configure the program so that it works even without internet.

Check out how easy it is to use Google Translate to do voice translations on mobile and computer:

How to translate by voice in Google Translate on mobile

By default, the application is already installed on mobile phones with the Google operating system. However, if you don't have it on your phone, download and install Google Translate on your Android or iOS device. Then just follow the steps below.

2. On the left side of the app, select the language you want to translate. In our example, we chose English;

3. On the left, choose the language you want to translate into. We selected Portuguese; 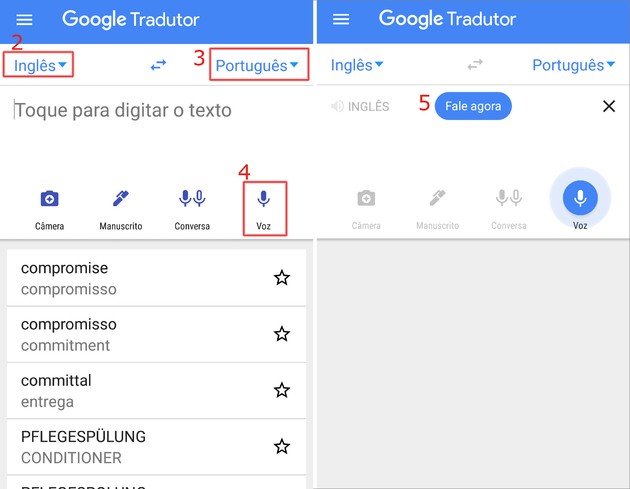 4. Then tap on the option Voz , represented by the microphone icon;

5. After the app beeps, say the phrase you want to translate. The program will interpret the content in a few seconds;

6. If you want to change the languages ​​(in our case, from Portuguese to English), tap on the icon with two arrows pointing to opposite sides. Then just repeat the process. 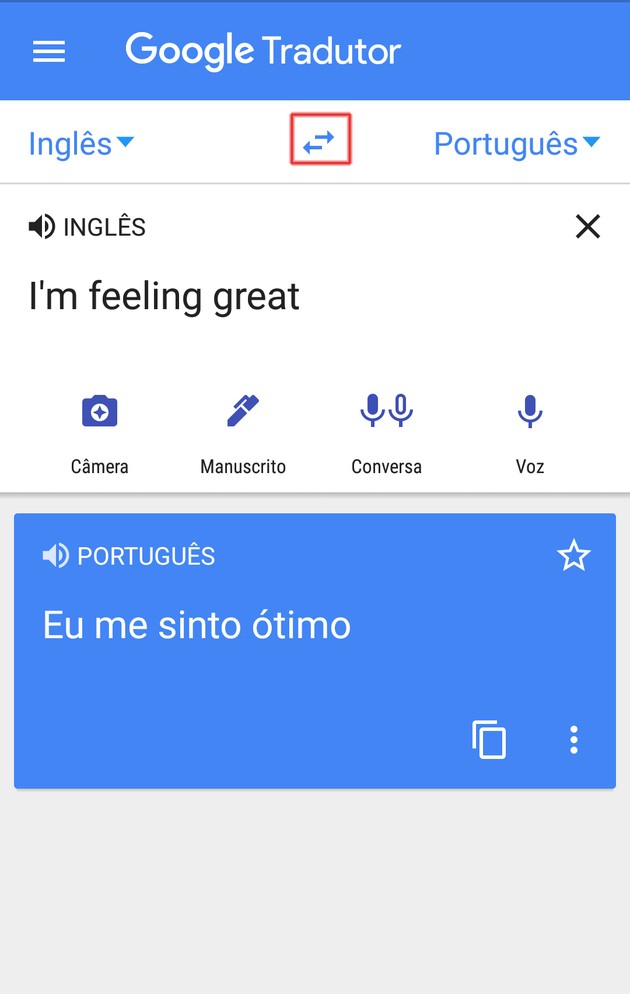 How to translate real-time conversations in Google Translate on mobile

The feature is useful for facilitating live dialogue between two people who speak different languages.

2. On the left of the app, select the language of one of the parts of the conversation;

3. On the right, choose the language spoken by the other person participating in the chat;

4. Then tap on the item Talk, represented by two microphones; 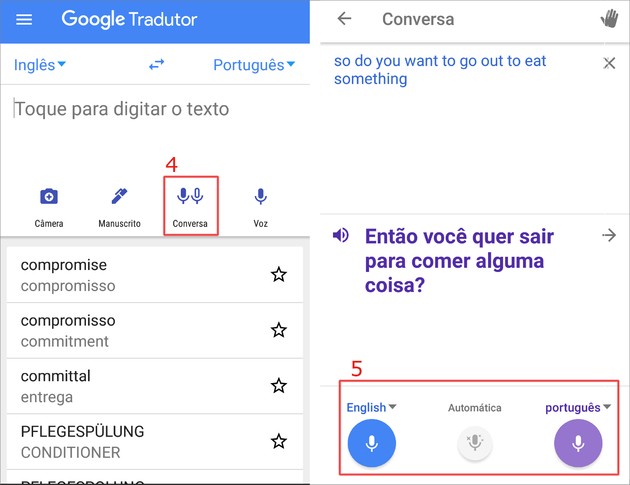 6. Choose the alternative you prefer and then start talking. The app will interpret the content, translate it in a few seconds by text and audio.

How to translate by voice in Google Translate on PC

Google also offers an online version of its translator. In addition to texts, the web version is capable of interpreting voices from one language to another.

2. On the left side of the screen, choose the input language, that is, the one you want to translate; 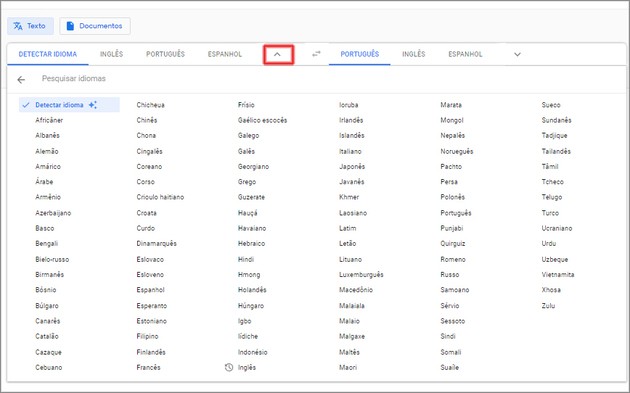 3. Repeat the process in the left window, this time to select the output language;

4. Then, tap on the microphone icon, located in the lower left corner of the first box;

5. In place of the microphone image, a red circle will appear. Say the sentence that will be translated and, at the end, click on the red circle;

6. The translation will be done in the form of text automatically.

Other functions of Google Translate

In addition to doing text and voice translations, the Google app also allows you to interpret images (such as plates, packaging and photos). The program also offers the option of transcribing content from one language to another without having to be connected to the internet.

2. On the left of the screen, select the language of the content you want to translate;

3. On the right, choose the language for which you want the transcription done;

4. Then tap the icon Camera;

5. When the camera opens, frame the text you want to translate. Depending on the languages, the process will be done in real time, with the original text being overlaid by the translation; 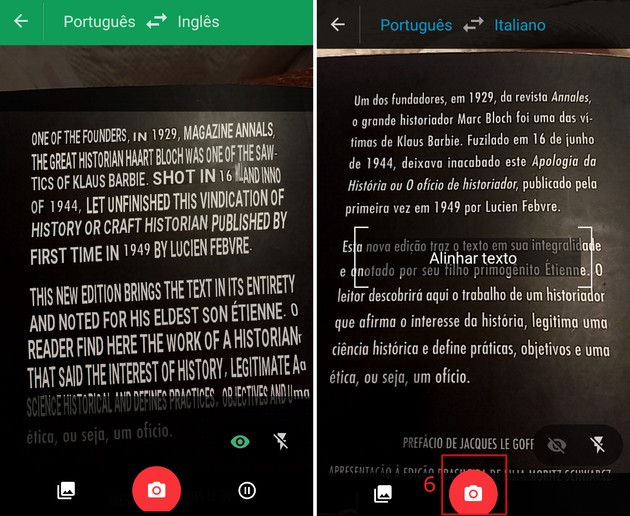 6. If it doesn't happen simultaneously, press the red camera symbol to take the picture;

7. The app will scan the image. Then, highlight with your finger the area of ​​the photo in which the content you want to interpret is located; 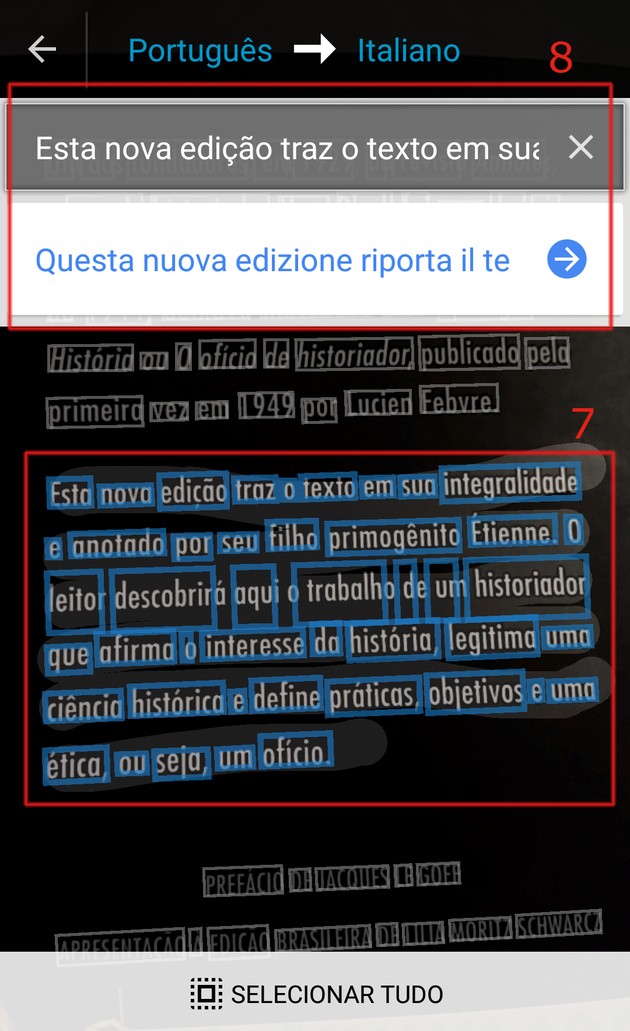 8. The transcript will be done and displayed at the top of the screen. When finished, tap on the frame to view the complete translation.

How to use Google Translate in offline mode on mobile

To configure the offline translation mode, the user must have access to the internet. Afterwards, it is possible to use the application without any connection to the network to interpret texts and images.

2. Tap on the three-line icon located in the upper left corner of the app; 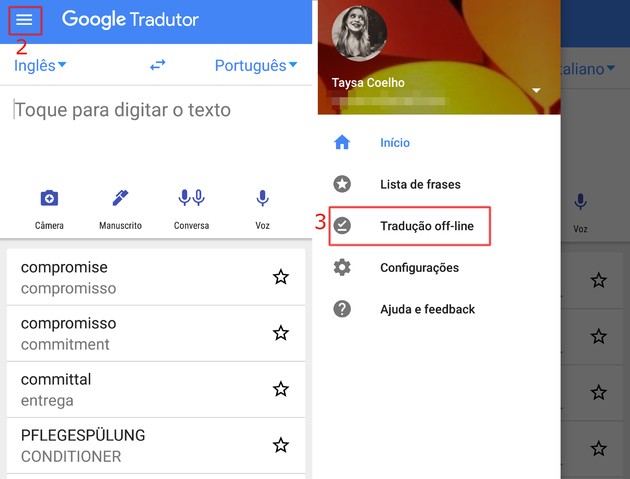 6. Once the downloads are complete, the downloaded languages ​​are displayed at the top of the list. After that, it is already possible to use the program without internet.

Google Translate is just one of a number of voice translation apps on the market. If the program is not your favorite, we list other available options:

Learn to use the Aurélio Digital dictionary and expand your vocabulary ❯