2022 was a very difficult year for seamstress Marta. Because of the crisis, she was suffering from the low demand for work in her region.

That's when her daughter Lana, after completing Camila Porto's Training, decided to create a page for her mother's sewing studio and help her get better results.

Lana Oliveira has been a Designer and Social Media for 6 years in the city of São José do Rio Preto – SP.

After leaving the company where she worked, Lana was impacted by Camila Porto's Training announcements and saw a new professional opportunity there.

“I decided to buy the course because I needed to change my professional reality. I needed to update myself with social networks and I saw this opportunity in the course.” Lana Oliveira

During this period, her mother Marta, who owns a Sewing Atelier in Votuporanga, was going through a phase of low demand for sewing and her income was R$ 600,00 per month.

THE CHALLENGE: INCREASE DEMAND AT YOUR MOTHER'S SEWING ATELIER

Seamstress Marta was discouraged with the low volume of orders in the last year.

“My mother's biggest difficulty is having a demand for clothes to make. The demand was only in repair of ready-made clothes.” Lana Oliveira

As a result, she was challenged to apply her knowledge of Digital Marketing and help her mother achieve better results.

THE SOLUTION: EXPLORE THE CARNIVAL SEASON TO GENERATE DEMAND

The knowledge that Lana acquired in Camila Porto's training was very important for the development of a sales strategy for her mother's sewing studio.

Step 1. The first action Lana took was to create a Facebook page for the Ateliê de Sewing. She followed the step by step taught in the training and included all the information needed to structure the fanpage.

At the time of Carnival, she identified that there was a high demand for customization of abadás. It was then that she decided to make an ad with that focus.

Step 2. For this, she began to study the public that could be interested in this offer. Through a survey, she identified that women between 20 and 50 years old, with interests in Carnival, women's clothing and shopping could be potential customers.

Furthermore, she directed the ad only to the city her mother acted in.

Step 3. With the audience aligned, Lana and her mother set a budget of R$25 for the ad and a sales target of 30 abadás.

Step 4. In the ad, Lana used the tactics of an impossible-to-ignore ad learned in the course and developed a description and image to grab her audience's attention. 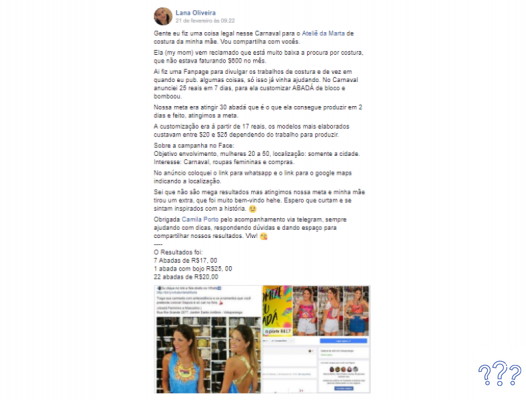 after the Training, the seamstress' results were: 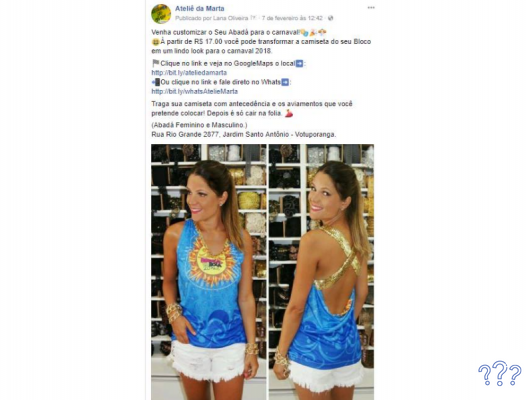 HOW TO APPLY THIS STRATEGY IN YOUR BUSINESS?

Just like the seamstress Marta, who used Facebook to sell more, you can also get good results for your business.

Meet the Social Sell Course. Find out how to use Social Media to sell more (starting with R$5 a day) and sell up to 5x more using Facebook.