Some are fun, others touch our emotional side. There are those that shock us, but there are also creative advertisements that make us think. It doesn't matter if it makes us laugh or cry, many of them we will never forget.

Who has never heard the phrase “advertising is the soul of business”? We're tired of talking here about how important it is to invest in ads, so much so that it's even become a mantra. However, just taking any photo or video and advertising it is no longer enough.

Learn More: Steal Like an Artist: 10 Tips on Creativity

The competition is great, there are many companies fighting for the public's attention in the various media, even more so in digital marketing.

In the midst of so many businesses being advertised, especially online, creative advertising can be the differentiator of your business.

HOW TO MAKE CREATIVE ADVERTISEMENTS

Unfortunately, there is no formula for creative advertising. Not even using cute pets and music that sticks in your head lasts for a long time. With the growth of the internet and social media, the famous “15 minutes of fame” never made so much sense, since virals can last even less than that.

But then, how can you create creative advertisements for your product or service? We've separated some quick tips for you to get your hands dirty:

Go beyond age, gender and where you live. Try to understand what your audience consumes, what language they use, what their doubts, pains, problems and needs are.

Here it is worth following companies in your niche and others as well. We're not telling you to copy or plagiarize what's working out there, because that's a crime. But it's mainly to know what's working (or not).

Follow TV shows, series and movies for inspiration. Always research which channels and social networks are trending in the market.

A great example of this currently is Tik Tok. Although many people turn up their noses at it, this social network has been a launch showcase for several current trends.

The most creative advertisements, regardless of what product or service it is, all have one thing in common: they provoke some emotion.

Whether it's joy, sadness, nostalgia, they focus on your persona's emotions.

4. GET INSPIRED BY OTHER CREATIVE ADVERTISEMENTS

As Augusto Cury said, “Achievements depend 50% on inspiration, creativity and dreams, and 50% on discipline, hard work and determination. They are two legs that must walk together.”

Search for the most varied types of creative advertisements to get inspired and activate your creativity. Seek to understand what she wanted to pass and why she became famous.

To help with this last item, we've separated 18 examples of creative advertisements for you to remember and also be inspired by.

Does a good picture speak a thousand words?

For sure! With these examples of creative advertisements we've separated, you'll see that it often doesn't take a Photoshop genius or words to make the best creative campaigns. 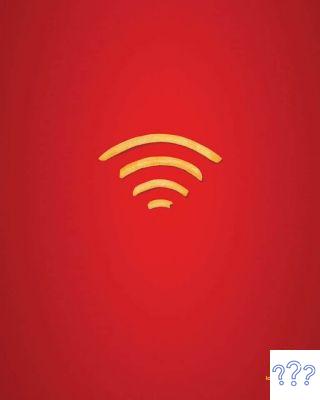 French fries! Yes, that's what the fast food chain used in its ad to advertise that its stores had Wi-Fi access. One of the simplest and most effective creative advertisements the brand has ever made. 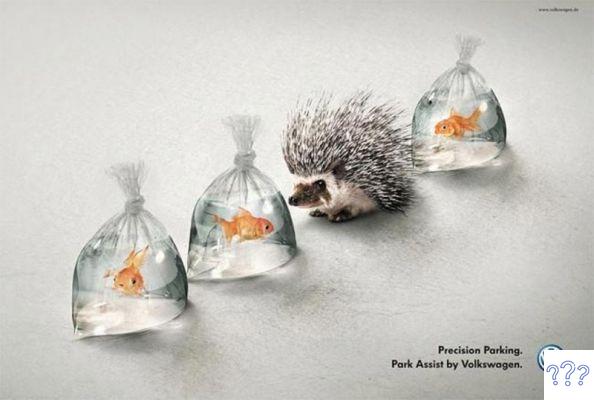 The car brand used a porcupine and fish in bags to address the importance of being accurate when parking your vehicle. In a simple and creative way, Volkswagen shows that if you don't park right, you can cause a big problem. 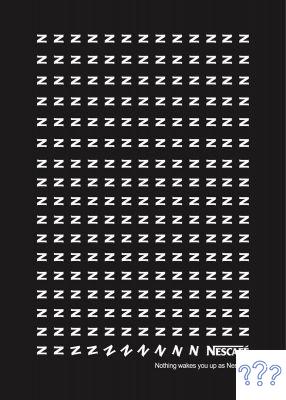 Nescafé has used the world symbol of sleep to show in a very creative way that nothing wakes you up like Nescafé.

Creative advertisements not only can but must interact with external elements, bringing a different vision and even a different experience to the target audience.

As is the case with this announcement from the NatGeo channel for a new show: 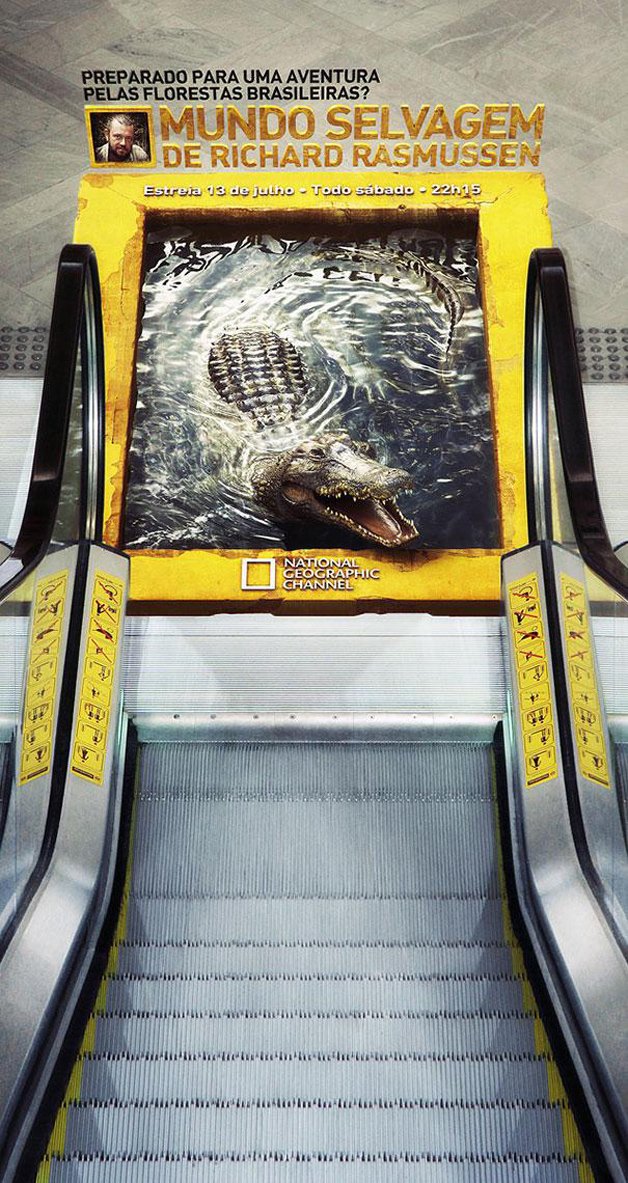 Here we have an example of creative advertisements that use their own audience to get their message across. People stop being spectators and become part of the ad.


In the case of Frontline's campaign, people were the fleas that the product intended to fight. 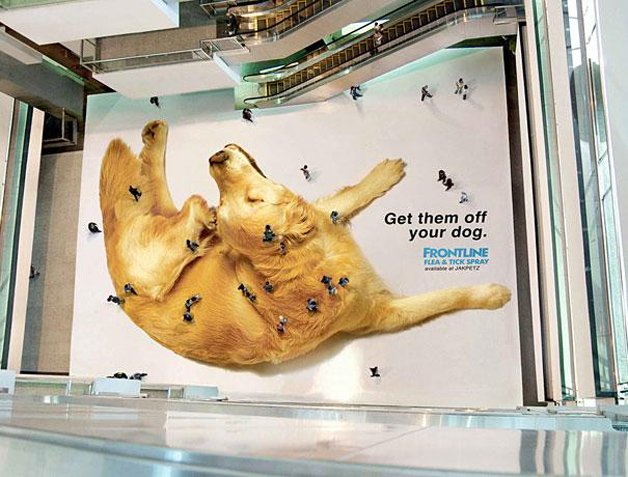 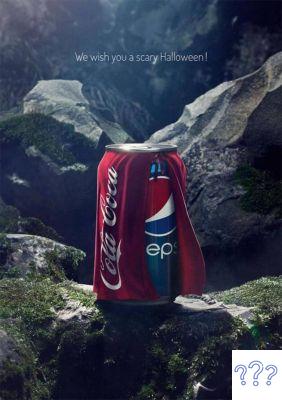 Another type of creative advertising, but a little more delicate, is when a brand makes fun of its competitor. I believe there is no greater rivalry in the beverage business than Coca-Cola X Pepsi.

And Pepsi uses, and a lot, of that! As in this example of a Halloween campaign where your can is dressed as a Coca-Cola with the phrase: “We wish you a scary Halloween!”

More and more videos are used for people to unleash their creativity. You may not have seen any of the creative advertisements we mentioned above, but you have probably watched some video from the brands mentioned below:

We could put any Netflix video here in this post, as the brand is famous not only for creative advertising, but for all its digital marketing. Netflix uses and abuses memes, celebrities and viral of the moment to promote its titles.

As is the case of this video by Whindersson Nunes with the cast of La Casa de Papel:

Living up to its crown, Burger King is king of creative advertising, especially when it comes to making fun of its main competitor, McDonalds.

This video is a portrait of that. His intention is to publicize the Halloween promotion, where whoever goes to a store wearing a clown costume, which is one of the symbols of his rival, wins a sandwich:

Surely, just reading this title, the song is already in your head (and I'm sure it will stay, at least, until tomorrow). This creative advertisement uses playful elements, such as ponies, to make fun of the term “horses” that brands use to indicate the power of their cars.

For this reason it was a great success, went viral and is still remembered today. In addition to increasing the brand's sales.

And when does creative advertising become a kind of meme? The phrase “ask at Posto Ipiranga” went viral and many people use it to answer their friends in a funny way. The success produced dozens of creative advertisements for the Ipiranga Post, such as this one:

What does a baby laughing at his father tearing a piece of paper have to do with a bench? You can answer: nothing! But that's not what the agency that created this ad for Itaú thought.

With a simple, light and fun video, the bank managed to get its customers to sign up for the card's digital invoice. It's not too much? One of the cutest creative advertisements in the world:

When watching this video, at first, you don't understand very well why a pet supply store is talking about tattoos. But the ending surprises and shows the noble intention of the campaign. It shows that creative advertisements don't have to be fancy, you can make your mark by helping others.

As the famous saying goes: “to remember is to live”. Advertising is no different. So we decided to bring you a bonus with creative advertisements that were a great success and marked an era. I doubt you've ever, at least, heard of one of them:

Surely this ad could not be missing among the creative advertisements. The bubblegum music and children dressed as animals were the not-so-secret formula that made this video one of the biggest hits of the 90s.

The “Mammals of Parmalat” fever was such that the company made a promotion, that if you put together 20 bar codes of the brand with another 8 reais, you would exchange it for a stuffed animal. This made the company go from a turnover of 38 million to 1,3 billion per year.

Who grew up in the 90s and loves popcorn, surely remember this jingle that was a fever at the time. To this day, if you smell popcorn, it's likely that you relate it to the brand of soda:

How to talk about McDonalds and not mention the Big Mac? Like talking about the Big Mac and not remembering its ingredients. Impossible! Even if you don't like the brand or the sandwich, you sure know everything that goes into it. “Two hamburgers, lettuce, cheese, special sauce…”

I doubt you haven't read it to the beat of the music!

At a time when landline phones still “existed” (young people are now searching Google for what that is), the fight between telephone operators was great. And Embratel stood out with its creative advertisements and popularized DDD at that time.

As we have seen before, in the 90s, the formula: children (if possible in costumes) + bubblegum music was a success!

Another classic example of how music, a jingle, can make a difference in creative advertisements that have survived time.

The bank doesn't even exist anymore, it's been a long time! If you who are reading this post are under 20 years old, you have probably never heard of the bank or this advertisement. But many people still remember the song when they hear the question “what about savings?”:

18. BOMBRIL - THOUSAND AND ONE UTILITIES

Bombril made its first television ad in the 70's and presented its poster boy. More than 30 years and 500 creative advertisements later, actor Carlos Moreno is still known for being “the face of Bombril”.

In addition, these commercials launched the brand slogan “a thousand and one utilities” that is a reference to this day:

Need more inspiration this week to help with your creativity? We made a post with 150 more entrepreneurship phrases to help in those moments of lack of inspiration. Click here to check.

Tell us in the comments what you think of our list and if we missed any creative advertising!

INSS life proof by cell phone: how to do it? ❯