Have you ever thought about adopting a hairstyle with braid to innovate the look? This is a great bet to keep your hair tidy for longer and perfect your production.

There are several types of braids, from the most complex to the most practical. In this text you will check out 40 inspirations from social networks to encourage you to upgrade your look just by changing your hairstyle.

The most famous braids are the most ornate ones, such as the built-in, side, inverted, boxer braids. In addition to them, we also have braids that imitate flowers and bows just by tying the locks.

But, don't worry, because we've also separated some ideas for simpler braids for those who don't have such an easy time reproducing these complex hairstyles.

Be sure to check out all these braid variations and choose which ones you like the most.

Long hair is great for all types of braid hairstyles, as it enhances the work of the ornamentation, as with the more elaborate built-in braids.

The high ponytail also looks more voluminous, especially if the hair is half up. Long hair is great for elaborate buns with braids, as the length of the strands provides a volume effect in the bun that looks prettier.

Short hair also has its charm and allows the reproduction of various types of braids. The so-called side braids stand out in short hair and give a more modern effect.

It also looks nice to do more common braids that don't need to be built in. If you make one on each side of your hair and then tie it with a satin or velvet bow, your hairstyle will look delicate and different.

The differential of curly hair is that it offers volume to the hairstyle. When we leave the hair half up, the curls are more evident and, thus, it looks natural and tidy at the same time.

High ponytails with braids close to the root of the hair are some of the suggestions we brought you. It's also nice to make a regular or built-in braid and leave part of the end of the hair loose, to highlight the curls without tying them completely.

Afro hair is beautiful in every way, even more embellished with braids. There are specific braids to enhance the Afro culture:

In the example below, the first and second models have regular braids to decorate the rest of the hairstyle. But if we look at the other models, we will understand the differences in the braids.

We see the third model with a loose ponytail using a Nagô-style braid, as it is done from the beginning of the root. The next model with two buns has an example of Box Braids in different sizes.

In the first photo tutorial below we see a simple braid being made. To perform an ordinary braid, just divide the hair into three parts and braid the strands, from the corner towards the middle, following this procedure until the end.

The following tutorial shows how to add two small braids to the regular hairstyle. And in the last one, the braid is done with just a strand on one side of the hair. 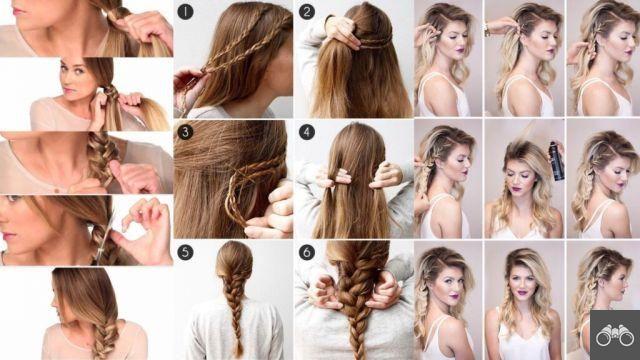 In the first image we see two built-in mini braids held by the scarf. In the next one, the scarf is placed in the form of a tiara and then the ends are used to make the common braid along with the other strands.

The last two are inlaid braids made together with the scarf, which works like a strand to be braided. At the end, a loop can be added.

Braided hairstyle: Side tucked in

This type of braid is made in a similar way to the traditional braid, but it is done starting with a central strand on the side, as shown in the step by step in this video.

The boxer braid is very famous for being reproduced in the hair of celebrities and digital influencers. This style also refers to the world of sports, being used by female players.

These tutorials show you how to innovate hairstyles with built-in braids. In the first example, the model divides her entire hair into four smaller braids, two in the back and two on the sides.

Then she takes the braids from behind and curls them into a bun. The strands on the sides are used to make a kind of crown with the hair itself.

The second example is a little more complicated as you need to braid strands on both sides of your head. So to do it alone, it must be more difficult. But, the result is beautiful, since the braid is curved. 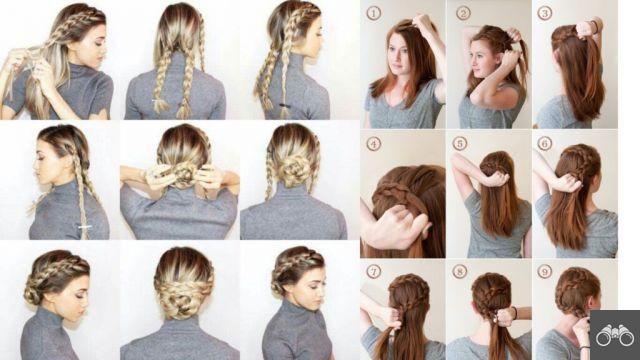 Here we separate some hairstyles in which some embellishments were added to give an extra touch to the ornate braids.

The first is a side braid. The second is a different type called a fish scale. The design of this hairstyle really resembles the design of scales and, therefore, bears this name.

Then we have an example of a twisted braid and in the last one some curls are fixed, giving the idea of ​​circular movements to the hairstyle.

These are next-level hairstyles that you need to really master braiding techniques in order to replicate. The first braid is in the shape of a flower and the rest of the hair is left loose with embellishments.

The second hairstyle looks very modern with side braids and a high ponytail. And the last one is a bun in the shape of a rose, which was impeccable.

Now it's time to get your hands dirty, or rather, the highlights.

Invest in braided hairstyles and let your imagination run wild. You will realize how good it is to feel beautiful and stylish wherever you go.

add a comment of Braid hairstyle: 40 inspirations from social media