Forza Horizon 4 leaves you drooling from the very first screen, it's hard to believe that the game just got even more beautiful. Especially if you played the previous one. Have you ever heard of “eye drops”? Well then, here is the most beautiful racing game of the entire generation. And hey, some people even say that this is the most beautiful game of this generation, spanning all genres. And it's not modesty, the game shines, in every corner and detail. Graphically Forza Horizon 4 it's beautiful to hurt. 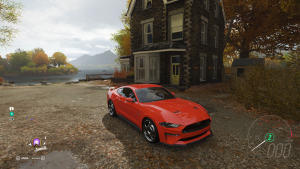 You can now buy houses, which serve as a fast travel point

WHO OWNS THE FESTIVAL?

As soon as you start the game, you are introduced to Keira, the curator of the Festival. Apparently she is an employee of the previous Festival owner in Australia and if you played Forza Horizon 3, you know very well who she is talking about. Rebecca, the tour guide, will walk you through the first steps and then you will be presented with the character creation screen. You now need to choose a face for yourself, within the game. Forza Horizon 4 now has customizations where you can change outfits, style and even celebratory dance or provocative gestures. The tuning this time wasn't just restricted to cars. There are hilarious modifications and even outfits that make you laugh to look at them. You can change t-shirts, jackets, glasses, bracelets, shoes, hats… You can definitely make the character his own style, no matter how bizarre it is.


There are other characters featured in the game and each of them represents a racing category. Highlight for Mr. Steele, who is directing a movie and needs you to act as a stuntman. Expect strong emotions behind the wheel.

Now there is only one Horizon festival…

In campaign mode Forza Horizon 4 you can proceed as you see fit. If you like Street Racing, you can do them all. You no longer need to do this or that race to advance in the game and then unlock more Street Races. For each category, you have an advancement level. Even designers and tuners will have levels of advancement, increasing the Influence, which is the name given to advancement points in the game. You still have experience points, but they now only indicate the overall sum, regardless of category. Within the game, what puts you most on the path of "zeroing the game", are the changes of seasons and exhibition events. For each season, an event. And they are getting more and more impressive. Racing against motorcycles? Okay. Race against a train? Okay. Race against a gigantic hovercraft? Okay. I just won't say more so as not to spoil the surprise of those who play.

Within the events, you can choose to play solo, cooperative, in PvP (player versus player) and also the Rivals mode. It's all there, just a button away. No loading menus and more menus. Within each event you have the option to play solo, co-op or against someone online. In my opinion, an excellent addition that brings more fluidity to the game, since you can decide on it at any time, without having to abandon what you were doing to access other screens and other menus.


One of the great insights from the previous game returns in Forza Horizon 4: the drone. You can search for abandoned license plates and car by making use of it. And yes, abandoned cars, hazard signs and events, radars and speed snippets are also present. The game also has a very cool interaction with Mixer, where you can accumulate Influence points by watching or broadcasting the game. 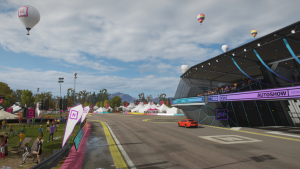 …but it's bigger than any other festival.

The game's sound is impeccable. The capture work done on the cars of Forza Horizon 4 It's very well done, even the ambient sound elucidates the situation you're in. Whether you're riding through gravel, mud, snow or grass, you know perfectly well what floor you're on just by the sound.

And speaking of sound, the songs are a show apart. Horizon has always been synonymous with good music and this one is no exception, ranging from electronic to rock music, satisfying everyone's ears. Even with comic parts where the DJ presents situations that happened a little while ago, be it an event, a race, bringing even more immersion to the game. The muffled sound inside the car, the stones hitting the floor, the trees and signs breaking, all very well done and calculated. I like to play with headphones and with a good volume, so I could even notice the car idling, which in some models is very realistic. The dubbing of the game remains exceptional and needs no comments.

like all good Force for its own sake, the gameplay is accessible. In Forza Horizon 4 you have a hundred options to make the game challenging and also more fun. Depending on your masochism, you can have just as much fun. You can change, in a few commands, a whole list of assists to make the game more difficult. In some situations, make it even easier. Here's some advice: For Drift events, turn off the car's traction control, it will be much easier to complete the event and still smash the score.


The car is heavier compared to the previous one. I noticed this in the demo, which we also looked at. It's not a defect, on the contrary, you feel more weight on the part of the car in contact with the track, and this has brought you closer to its older brother, the Forza Motorsport. I made some changes in the driving part and driving simulation and the car still felt heavy, which leads me to believe that the game's physics is really forcing this weight.

The commands are extremely accessible and the response is absurdly fast, no wasting time with slow menus. If you know the way, you can do it without looking at the screen, like a combo in a fighting game. 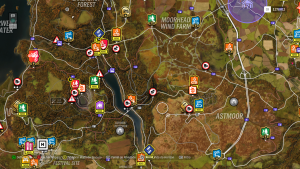 I don't even know where to start

Forza Horizon 4 improves on everything and still adds more. The game came to keep the post of the best in the Arcade racing genre of this generation. Making perfect use of the Xbox One X machine, with all the possible enhancements, the game is the pure diamond already cut. The entire menu layout and the map where Horizon 4 happens, they give you a totally new game that lives up to the results obtained with the previous one. 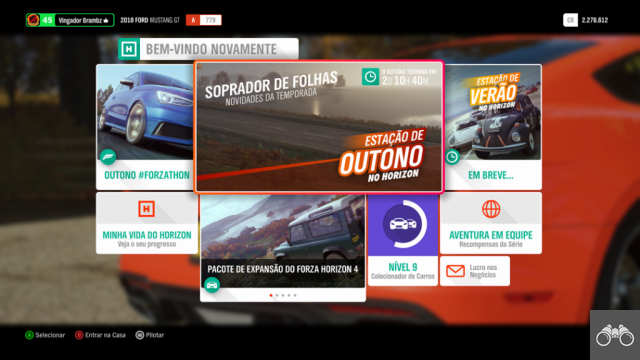 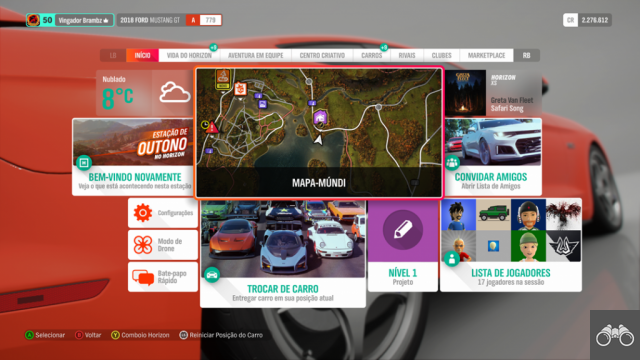 Forza Horizon 3 recently reached the incredible mark of 10 million players and this one has the potential for more. Slightly larger map, an absurd amount of cars, varied terrain, a multitude of challenges and races, all of this added up to make you want to play more and more. A game for car lovers (as I am) and also for those who just want to get out of everyday life and walk through beautiful landscapes, with beautiful cars.

Forza Horizon 4 delivers the best of single player, with numerous and excellent challenges, added to a competent multiplayer with very few drops and zero inconsistencies, making it an excellent exclusive, which deserves to be in the collection of any Xbox One owner.