Análise: Journey to the Savage Planet

Something that I like a lot in the world of games is the ability of games to surprise me. I love when those games that you start without much expectation come along and they completely conquer you. One such perfect example is Journey To The Savage Planet. It is the debut title of Typhoon Studios, which started with a small team of 3 people, and today despite having grown a little, it is still a small team. To distribute the game they closed a partnership with 505 Games.

Journey to the Savage Planet is a first-person exploration and adventure game that focuses on taking players to explore an alien planet in search of resources and a way to return home. It brings several themes related to science fiction, a colorful and lively world to discover, a narrative full of humor, fun gameplay and the possibility to enjoy it all with a friend.

The game brings a mix of space exploration and the colorful world of No Man's Sky, with a narrative full of acid humor that is very reminiscent of what we saw in The Outer Worlds, but all this with a personality totally its own, which makes the package very interesting. Let's get to know more about the game in our review.

The premise of Journey to the Savage Planet It's quite simple, our character is an employee of Kindred Aerospace, which is the proud holder of the title of the 4th best space exploration company in the universe. Your role in the company is that of an explorer, you travel to alien planets in search of resources, as well as knowledge about the local fauna and flora, the problem is that the company only sends you with one-way fuel, and you have to turn around to find a way to return to Earth and still bring results from that exploration.


The story is basically that, but it takes on a lot of irreverence with the acidic comments of the AI ​​EKO that accompanies you all the time, and adds phrases full of humor and sarcasm. There are also messages from Kindred's CEO to you and the company's commercials, which are full of acid humor about our society, and about over-consumerism, where anything can become a product and generate profit. In addition, as we explore the strange planet AR-Y 26, we find, in addition to the biomes full of life and color, several mysterious constructions, which indicate that in addition to the wildlife that exists there, some other type of more advanced civilization populated that planet. These are simple elements, but they work so well that they encourage you to explore every corner in search of more clues about that place. 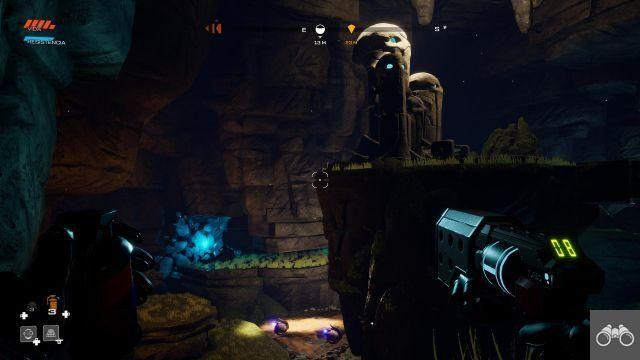 Many of the missions appear as we explore the planet, and in addition to bringing new information to the narrative, they also offer improvements for your character, so that he can reach more places on the map and thus progress in the story. I finished the campaign, or at least got to the part where the credits roll, in about seven and a half hours, but there were still a lot of things to do in AR-Y 26, such as finding fuel for the ship, and getting there. in an ending, shall we say, true. Another two hours and I was there. The game still offered me several research missions, which would unlock more character enhancements and thus expand exploration. That is, even after finishing the story, there is still a lot to do in Journey to the Savage Planet, and best of all, you feel like continuing your exploration.

The great focus of Journey to the Savage Planet is exploration, the game even has some light RPG mechanics and shooting combat, but the center of the player's journey is to venture out to explore the mysteries and beauties of the planet AR-Y 26, in order to discover what its various biomes hide. This is what makes the game so interesting, as it encourages you to discover its world through your own eyes at all times, which makes us curious to explore more and more.

Right away we realize that this idea is being taken very seriously, as there is no map to guide us and we have to discover the points of interest by ourselves, there is only an indication of where our objective is, but the task of finding the way there is entirely up to us. The most interesting thing is that as we seek to reach our goal we find new missions, which are important to improve our character and thus allow us to advance to new areas. Yes, the game draws from the Metroidvania source, so we will come across several places that we will not be able to access at a given time, as we need some equipment that we do not yet have, so we need to advance a little and then return later to discover what is hidden there . 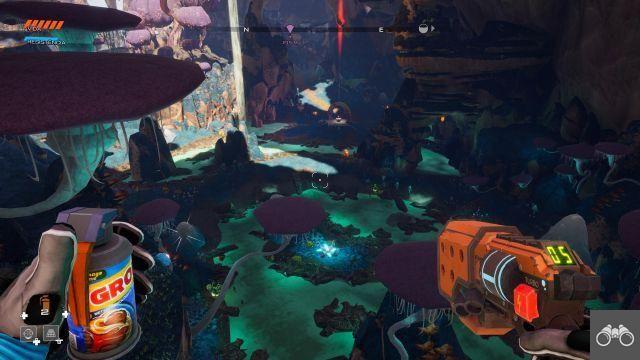 The first mechanic we know is scanning, where we can not only learn more about the fauna and flora of the planet, but also know more about its history and be intrigued by buildings and artifacts of a civilization that no longer seems to live there, or is very well hidden. Which is one more piece of the puzzle for you to put together. Another important factor of this scan is the precious information we receive, such as ways to defeat an enemy or interact with objects that are on the map.

Then we set out to explore resources, which are essential to improve and build our equipment, ranging from jetpacks to grenades with the most diverse uses. To do so, we need to collect various ores that are collected from stones and defeated enemies, as well as solving puzzles that reward us with a rare material from that planet, which is also essential for crafting.

Whenever you get these resources you should look for a fast travel point and go back to your ship and deposit them. This is important as whenever you die your resources are on the ground and you have to go back to rescue them. Did he die halfway? Don't worry, the game isn't punitive like Dark Souls, and your resources will still be there for you to redeem.

In addition, the colorful fauna of AR-Y 26 provides improvements and benefits for the player. Some plants have the power to heal our character and others have the function of replenishing grenades. Finally, there are some well-hidden fruits that increase the character's life and stamina, which brings a very simple progression system that fits well with the exploration proposal. 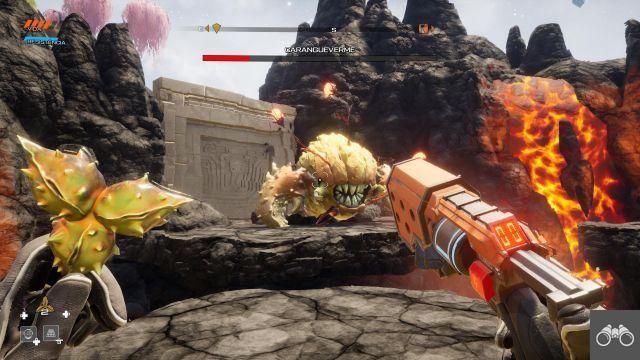 The enemies have a good variation, and there are even some bosses that bring a very interesting challenge, even with the focus on exploration, these enemies work well in combat moments. The mechanics work very well which makes exploring the world created by Typhoon Studios addictive and fun. Don't expect a game that takes you by the hand and teaches you everything to do, the idea is that you explore and discover everything yourself, and this works perfectly with the proposal of Savage Planet.

As I said above, Journey to the Savage Planet brings the possibility of playing all this special adventure alongside a friend, which makes the exploration even more fun and deep, since the other player can find places you probably wouldn't find. Overall, it's a very enjoyable co-op experience, and both the story and mechanics are made even more fun with a friend. This cooperation is online only, local mode is not possible. 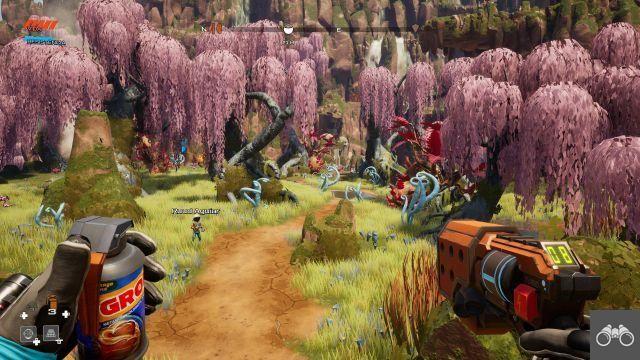 Both the save and the resources received during the session stay with the host, so the ideal is to play a little on each friend's save so that both have an equal progression. Still, Achievements are unlocked for both players. If the host wants to continue his game in solo mode, he can too. The co-op mode is more like having an extra help in exploration, and it works very easily and without complications.

the world of Journey to the Savage Planet It is extremely colorful, with diverse environments and biomes. You will venture through wild forests full of strange creatures, dark and mysterious caves, islands of snow and lava, and even advanced alien structures. This set of locations works perfectly, so we never feel queasy during our journey as there is always something interesting to discover and explore. The enemies and creatures are also well built, bringing the feeling of really being on a different planet from human reality.

We don't see our character, but we can select his appearance on an irreverent splash screen, which shows well the comic atmosphere of the whole narrative. 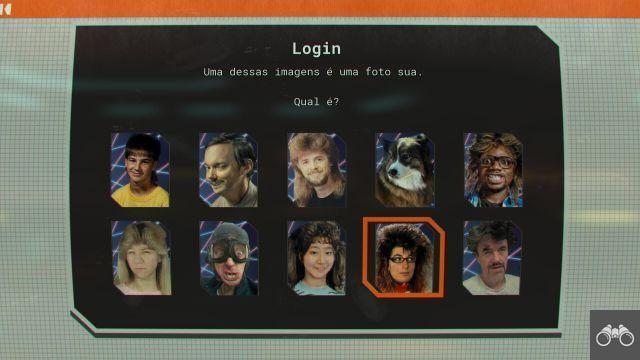 The other characters, like the eccentric CEO of Kindred and the actors in the commercials we see on our ship, are represented with clips made with real actors, which bring a unique interpretation to their roles and which also add the peculiar tone that Journey to the Savage Planet requires. Don't miss these videos when you're on your ship.

The soundtrack is also very well built, setting the right tone for exploration and combat, making all our time in the game enjoyable and fun. The title is fully subtitled, with subtitles and menus in Portuguese from our country.

Journey to the Savage Planet it was a great and pleasant surprise, the game that at first glance seemed to be one of those boring space exploration games, manages to offer a fun and addictive journey, where we want to unravel the mysteries of its plot and get to know everything that planet has to offer. The fun dialogues, which accompany a light and unpretentious story, add even more to the fun of the title, that even after the conclusion of the campaign we still feel encouraged to explore its world.

A fun and differentiated journey that needs to get on your radar.

The game will be released tomorrow, January 28th, but it can be pre-ordered on the Microsoft Store now.

add a comment of Análise: Journey to the Savage Planet