The franchise Divinity emerged from a successful and powerful Kickstarter campaign, where the project instantly won over players with its proposal to be a turn-based RPG, with a gigantic and complex narrative, which extends to its gameplay, aimed at the most classic players. After the resounding success of the first game, which won several awards around the world, the independent studio Larian Studios launched yet another successful Kickstarter campaign in 2022 and raised $2 million from backers. Now the game comes to consoles under the name of Divinity Original Sin 2: Definitive Edition, the result of a partnership with the Bandai Namco, which is distributing the game.

The title brings all its complexity to Xbox One, in addition to a user interface tailored for console, and optimized for Xbox One X where it presents itself with native 4K and HDR.

Did the game maintain the successful formula of the first game and remain one of the best tactical RPG experiences on the market? Let's find out in this review.

Complexity is the keyword for everything that exists in Divinity Original Sin 2: Definitive Edition, and that would not be left out of his narrative. The story takes place once again in the fictional world of Rivellon, but this time thousands of years before the events of the first game. What we find is a place abandoned by the gods and dominated by an order of oppressive mages, who trap and torture magic users, like our character. Also, with the death of the Divine, an evil known as Void approaches with its monstrous creatures known as Voidwoken.

The seven gods of Rivellon put their power into a source, but with the death of the Divine, who was the person responsible for its use, it was left unprotected and attracting those Voidwoken that want its power. The Order of Masters continues to protect the source, but carries out dubious methods, putting collars on everyone they deem dangerous. As a magic user, our character feels compelled not only to help others who are being mistreated, but also to prevent these nefarious forces from gaining such power. Also, you are on your way to becoming a new Divine, so be prepared for many challenges and people trying to get in your way, but also those who will try to help you and show sympathy for your journey. 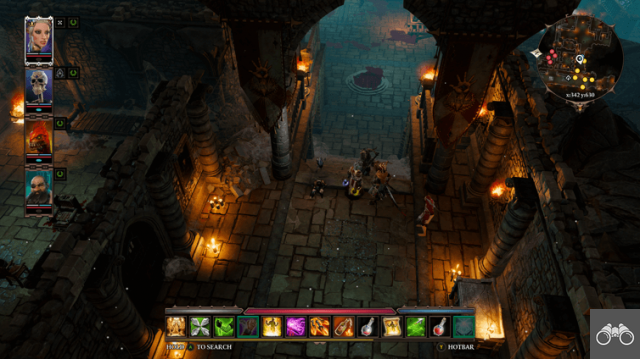 To develop this story, Divinity Original Sin 2: Definitive Edition offers us different types of races with 6 characters of unique origin, who have their own personalities and personal missions. And that has a big impact on the way, not only the dialogue opens up to you dealing with others, but also the attitude of other people towards your character. It is also possible to recruit up to three companions to follow you and the interaction with them is also essential for creating bonds of friendship, rivalry and even romance. A companion dissatisfied with your actions may even leave your group.

Choices are also important in the narrative progression of Divinity Original Sin 2: Definitive Edition, because there are several ways to advance in missions and the more we explore the places on the map and talk to the people around, we discover clues on how to go, where to ask for help and even find secret places and treasures. There is no right or wrong way to proceed, you must gather your clues, complete the missions that arise and choose on your own how to create your adventure. Even the answers given have weight and they can make that person an ally or even start a battle. This freedom not only increases the immersion within the story, but also makes the progression delicious, instilling our curiosity to explore different alternatives. 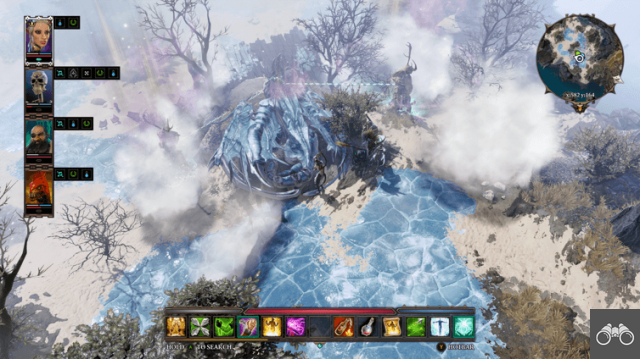 The difficulty of the journey is literally in your hands, because depending on your choices, your path can be easy or very difficult, everything will depend on your choices and way of approaching situations.
Another curious fact of this narrative structure is the existence of a narrator during most of the dialogues, he is not limited to saying what is happening in the scene, but also transmits to the player the emotions and behavior of the characters involved in it. Something that brings a feeling of playing the good and classic tabletop RPG, the one with pen and paper, where imagination builds memorable stories between friends, and Divinity Original Sin 2: Definitive Edition brings that feeling with mastery.

What scares many people into venturing into the franchise Divinity, in addition to its well-known difficulty, is its turn-based battle system that is not something that everyone likes. I myself have some resistance in relation to this type of combat, but I was very surprised and satisfied with what I experienced in Divinity Original Sin 2: Definitive Edition. It is an RPG with an isometric view, the one where we see everything from above, and that perfectly matches this more tactical style. To embrace both veterans and newcomers to the genre, the game offers four different difficulties for the player to choose from, whether it's more story-focused or combat-focused, the choice is yours.

The combats are very interesting and each one brings not only new enemies, but also different behaviors and different scenarios, so in each combat you must carefully analyze what to do. To move around the scenario during fights and use items and skills we spend AP (Action Points) and we must analyze according to the enemies and the sequence of attacks if we are going to position ourselves better, attack, support a companion or even heal. Every move must be analyzed carefully. And get ready, because the combats are very complex and some of them usually take a long time. Even playing with a focus on the story, I witnessed combats that lasted about 30 minutes, which already demonstrates the level of challenge of Divinity Original Sin 2: Definitive Edition.

A high point of combat is the way his spells can drastically alter the battlefield, for example, releasing a blast of fire can do great damage to enemies, but his trail on the ground can burn your friends too, another example is that you could conjure a rain to put out the fire and help friends in trouble in the flames, but that would take away the damage inflicted on enemies. Everything has weight in the combat choices in Divinity Original Sin 2: Definitive Edition And that's what makes the game so special, because every step and every action must be carefully thought out, not only in the dialogue choices and the way you interact with others, but also in every action chosen to be taken in combat. The game breathes strategy and tactics at all times, which not only should delight fans of the genre, but can also be a good gateway for those who are curious, but have not yet ventured into it. 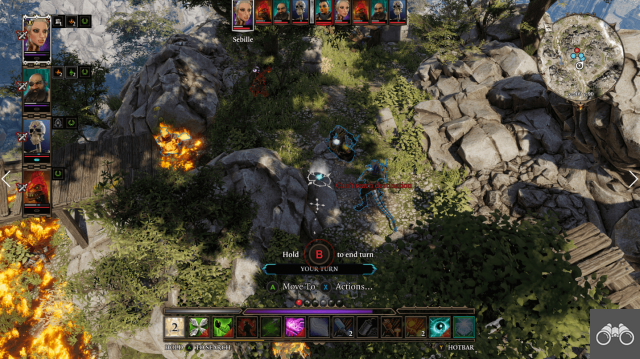 Divinity Original Sin 2: Definitive Edition also offers an extensive system to improve and customize your character, with Attribute Points (Strength, Intelligence, Constitution…), Combat Skills, Passives, Points to discover secrets on the map, increase your chances of success in social interactions and even their stealing techniques. Both these settings and the distribution of active skills and equipment must be customized for your character and also for those in your party. So it's no use leaving only your character strong to succeed, you must improve all your companions.

Just like in the first game Divinity Original Sin 2: Definitive Edition also offers the opportunity to play with other players the entire campaign in a cooperative way. There is an option to play local (up to 2 players) or online and (up to 4 players), and the guest player will join your game and take full control over one of your teammates. This interaction with others is very cool, with complete freedom to explore and discover secrets for the host game. This freedom must also be given with caution, as it will be under the control of a character of yours, so I recommend that you leave your game open only to friends or by invitation, so you avoid problems and guarantee your fun. The system is based on the host system, so progress is only saved for the account of who is in control of the session.

Already Arena mode brings the competitive component to the game, because in it you can face other players and test your skills. If you don't want to face other players, you can also test yourself against the game's AI, which also comes at you with everything.

Graphically, Divinity Original Sin 2: Definitive Edition presents itself very well, with beautiful scenery, full of details and well differentiated environments, which increases the desire to explore and discover more of these impressive places. The effects of spells are incredible, offering a treat for the eyes when they are cast. The characters are also very well represented, as are the clothes and weapons, which are well developed.

But not everything is flowers, the game presented some crashes during combats, especially before defeating an enemy or releasing a spell with a large area. Nothing that interfered with the gameplay, but still something annoying when it happened. 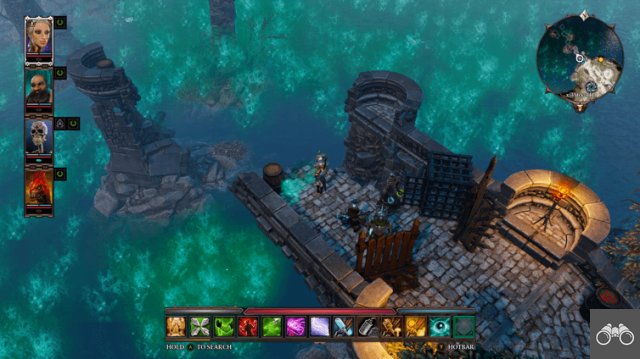 The soundtrack of Divinity Original Sin 2: Definitive Edition, as well as the background effects work well and are inserted at the right time and moments, which enriches the gameplay even more. The voice acting of the characters is impeccable, with voices that match perfectly and bring the right emotions to each situation, which brings even more immersion to the narrative.

Unfortunately, the game does not have subtitles in Portuguese in our country, which will greatly harm those who do not understand the supported languages ​​(English, French, German, Russian, Polish, Spanish and Chinese), which is a shame, because the game has a huge focus on dialogues and a lot can be lost with this lack of support for our countrymen. Ball out!

Divinity Original Sin 2: Definitive Edition brings a deep experience for those who enjoy a challenging turn-based combat system. The game still surprises with a system of choices and consequences that really have an impact on the player's progression, allowing several ways to advance.

just like the first Divinity is a game to be enjoyed for a long time, because its intricate and vast content is not easy to complete, and its complexity takes a long time for the player to really advance in the story, the second game improves this system even more. Even if it seems a bit frightening, it is a game that will win over fans of the genre, and who enjoy long-term experiences.