What is WhatsApp GB? Is it worth using?

Author and references
What is WhatsApp GB? Is it worth using?

Do you know what WhatsApp GB is? Communication via the Internet began to gain fame in the 90s with the emergence of IRC networks and its main application, mIRC.

Since then, instant communicators have been gaining market share. Then came ICQ, MSN (or Windows Live Messenger), Google Talk, Facebook Chat, Skype and there were also chat rooms on sites like UOL.

With each new instant communicator that appeared, new features were implemented according to technological advances, and this continues to occur today, when we have Telegram, WhatsApp and several other instant messaging apps that can be used both on the computer and on the smartphone.

Learn more: What is the difference between Telegram and WhatsApp?

The best known today is WhatsApp, which has a set of features capable of providing agile communication both on a personal and professional level. But the human being always wants something more, and the companies that produce apps end up not being able to keep up with this incessant desire of the human being.

And to meet this market demand, there are alternative versions of apps, created by independent developers, which is no different for WhatsApp. One of the unofficial versions of WhatsApp that has been gaining more followers in the market and that is updated more frequently is WhatsApp GB.

What is WhatsApp GB?

WhatsApp GB is a modified, unofficial version of WhatsApp that works very similarly to the official app, offering additional features. As it is an unofficial version, you will not find it on the Google app store, so it is necessary to download the installation file from third-party websites.


In short, WhatsApp GB is an alternative to the official version for those who like apps with more and more features and don't care so much about security.

What does WhatsApp GB do?

It does the same thing as the official WhatsApp and a little more, as it has some additional features. For many, these additional features such as: putting passwords in conversations, more options for customizing themes, fonts and others that I will present later, are very attractive.

But, there is one thing that WhatsApp GB does that is capable of surpassing all its features: leaving the smartphone where it was installed vulnerable to viruses and possible attacks to steal information. Before going into details about its features, it is necessary to understand the real differences between the official and unofficial version.

What is the difference between WhatsApp and WhatsApp GB?

In terms of operation, there are not many differences, after all, WhatsApp GB remains an instant communicator whose objective is to allow people to communicate more quickly, whether by text, voice or video.

The biggest differences are in the set of extra features that the unofficial version brings and the limits related to standard features, as can be seen below:

The differences in terms of new features are the great advantage of WhatsApp GB in relation to the official version, but there is a difference that is very important to know. WhatsApp GB is not developed and maintained by Facebook, nor does it pass Google's security and compatibility checks to make it available in the app store.

We will talk about the risks of this type of installation later, but now I want to show you some advantages of WhatsApp GB over the official version.

What is the advantage of WhatsApp GB?

The advantages of using WhatsApp GB are in the extra set of features it has. Below is a list of some features available only in the modified version: 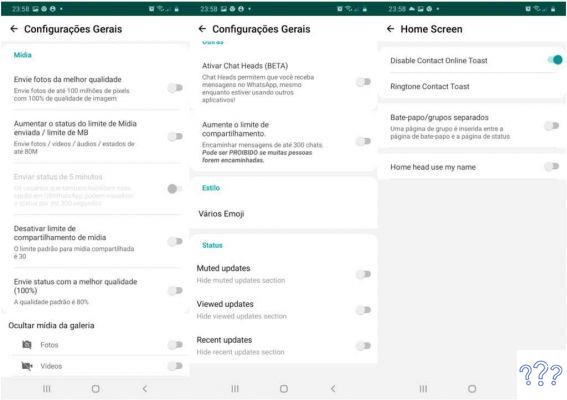 The extra features that WhatsApp GB has are very interesting and useful, but using unofficial apps can put your smartphone and data security at risk.

What are the dangers of using WhatsApp GB?

The use of unofficial apps is a very common practice, as this type of application is developed precisely to provide features that are not officially allowed because they go against the rules, both of the company that created the official version of the application, and of the store of Official apps from each smartphone OS manufacturer.

Regarding WhatsApp GB, although its privacy and security terms are very close to those of the official version, it does not pass the tests carried out before being available in the app store.

This makes you need to download the installation file from an unknown source, which raises security risks. Here are some risks that GB WhatsApp users are taking:

In addition to these risks, users do not have any guarantee of operation and if they need any technical support, there will be no team available to assist them, having to wait for the moment when the developer decides to respond to the message.

How to know if the person uses WhatsApp GB?

To know if a person uses WhatsApp GB or not, just being next to them and seeing the app they are using, other than that there are only assumptions. One of the simplest ways to identify the use of WhatsApp GB is to see if the person you are communicating with appears as offline while sending messages.

Another way is if the statuses (stories) have more than 139 characters in the texts or last more than 30 seconds each, after all these are features that only WhatsApp GB has. Other than that, they're so similar that it's pretty hard to tell which version a person is using just by texting.

Learn more: WhatsApp Status: Curiosities, tips and 10 phrases to use

I want to use WhatsApp GB, how do I install?

If even after reading this content you still want to try WhatsApp GB, the installation process is very simple and I will describe it below.

Step 1: Release the installation of apps from unknown sources on your smartphone

Before installing, you need to allow your smartphone to accept apps from unknown sources, that is, from outside the official store.

To do this, go to Settings > Security > Unknown Sources. Activate and confirm the release by clicking OK in the message box. 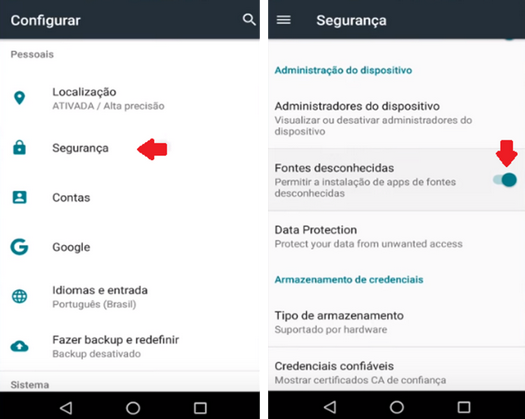 After allowing the installation of apps from unknown sources, download the installation file. There are several sources available on the internet, so make sure that the website you are going to download has a security certificate – that padlock next to the website address in your browser.

One of the sites that has WhatsApp GB for download and has a security certificate is gbplus.net. But even then there is no guarantee of security in your download or installation, so be aware.

Once the file has been downloaded, open it and follow the installation process, which is practically the same as installing applications on the computer, the famous “next, advance, complete”.

To install WhatsApp GB on iPhone you can do it through the Ignition app, which is the simplest way.

Step 1. Download the Ignition app and install it on your iPhone. When the installation is complete, run the app.

Step 2. Locate WhatAspp GB for iOS and download it. When finished press the install button on the information screen. At this point you will need to confirm the installation so that the installation can be carried out as with any other app.

After completing the installation, whether on Android or iOS, just configure WhatsApp GB the way you prefer and explore the additional features it has. To finish this content I want to reinforce that WhatsApp GB is an unofficial version of WhatsApp and that has no connection with Facebook.

It is also not guaranteed to work and its security level is much lower than that of the official app, and keeping apps of this type installed can pose a risk to your smartphone's security. If you prefer security rather than a lot of features, then the best option will always be to use the official WhatsApp app.

Think about what's most important to you and make the most of this content to help you decide which version to use.

What does and how to be a professional Copywriter? ❯

add a comment of What is WhatsApp GB? Is it worth using?