Netflix Family Movies: The 21 Most Recommended 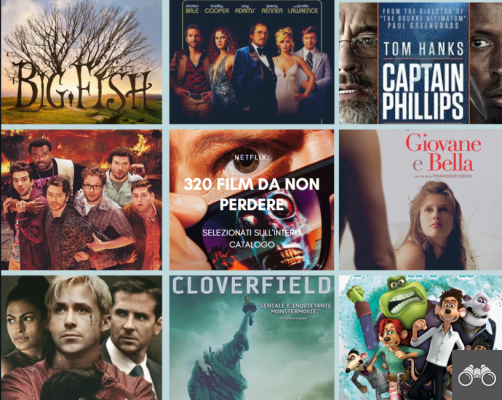 Netflix Family Movies: The 21 Most Recommended

Want to make that schedule to bring the whole family together?

How about watching a movie?

Check the list of Netflix family movies that we have prepared for you to watch with your family and friends and guarantee the fun.

With a movie catalog as extensive as Netflix's, it's easy to feel indecisive when choosing a movie.

And when it's to watch as a family, then, it's even more complicated to get everyone to come to a consensus on the choice.

That's why we've separated 20 movies for the Netflix family, with stories that, in addition to entertaining and amusing us, are able to teach us great lessons, which can be brought into our daily lives, both in the life of an adult and a child. .

In this 2014 production, a radioactive substance made 4 turtles grow, gain strength and knowledge.

To hide from society, they inhabit the sewers of New York, but fight to defend the city from criminals.

The quartet of mutant ninja turtles, named after the great artists of the Renaissance (Michelangelo, Leonardo, Donatello and Raphael), join forces with reporter April to fight a villain and save the population.

2. The Mitchell Family and the Machine Revolt

While on a trip, the plans of the strange Mitchell family change when angry robots invade Earth and threaten to wipe out humanity.


Now, the fate of humans is in the hands of the Mitchell family, who must find a way to contain the electronic devices and save the world.

It is a Netflix original movie that has been highly praised and has received good reviews from film experts.

Hotel Transylvania is a monster leisure hotel run by Count Dracula, who has a daughter named Mavis.

There are 3 productions available on Netflix.

In the first film, Count Dracula decides to invite some friends to celebrate Mavis' birthday, but an unforeseen happens and a human ends up at the hotel.

And to top it off, he falls in love with Mavis.

In the second film, Mavis and Jonathan get married.

In an attempt to keep his daughter close, Dracula offers Jonathan a job so they can continue living at the Hotel, especially after receiving the news that the family is about to increase.

In "Hotel Transylvania 3 - Monster Vacation", it was Dracula's turn to surrender to love.

While on a cruise ship to relax and take a vacation from work, Dracula ends up falling in love with a human, and Mavis fears this will put him in danger.

In addition, there is another production: Hotel Transylvania: The Series, where in the absence of her father in charge of the business, Mavis embarks on various adventures with her friends at the Hotel Transylvania.

To save their superhero parents, who were captured by aliens, as well as planet Earth, a group of children must work as a team and learn to control their gifts.

With a host of special effects, adventures and action, this could be a great option for the whole family to watch.

The spoiled little dog Trouble led a luxurious life, until his owner died.

In the fight over the inheritance, the woman's relatives end up not paying much attention to him, who gets lost and needs to learn to fend for himself on the streets.

In its original English dub, Trouble is voiced by rapper Big Sean and is a Netflix original production.

In this remake of the 1984 classic, 12-year-old Dre Parker moves with his mother to China and soon finds an enemy at school, the bully Cheng.

In order to defend himself and defeat Cheng, he decides to take martial arts lessons from Mr. Han must also learn to deal with his emotions and develop discipline and patience as part of his training.

The remake of the 1974 film is a perfect fit for movies to watch with the family.

Benji tells the story of two brothers who found, during a plight, a dog and fell in love.

You can tell everyone to prepare the tissues, because those who have or have had a pet and know this love well, will be moved at different times by the plot.

8. Jurassic World: The World of Dinosaurs

Anyone who is a fan of an adventure will definitely like “Jurassic World”.

The film takes place in Jurassic Park, where people can watch shows featuring dinosaurs that are domesticated.

But, because of a genetic experiment, in order to create new species, one of the dinosaurs gains an unusual intelligence and ends up becoming a threat to humanity.

9. How to Train Your Dragon

The film tells a story of a teenager, Hiccup, who is a Viking who fights dragons, as this is the way of life his people lead on the island of Berk.

To prove he's a true Viking, he goes to a school to learn how to fight dragons.

In the midst of all this, he ends up befriending a dragon and from that friendship, his view on killing dragons becomes completely different.

10. Indiana Jones and the Kingdom of the Crystal Skull

Archaeologist Henry Jones Jr. in their search for artifacts around the world, they have been successful since the 80s, when the first ones were launched.

Indiana Jones and the Kingdom of the Crystal Skull is the fourth film in the sequel, which took no less than 19 years to continue.

In this production, Indiana Jones, along with his sidekick Mac, manage to evade Soviet agents, but Jones' actions caused him to become a target and unable to return to his job at Marshall University.

That's when he meets Mutt Williams, who makes him an offer to help him in exchange for having Akator's crystal skull.

Jones embarks on the mission and has several challenges.

In a post-apocalyptic scenario, where monsters have taken over the Earth, a group of people have lived for 7 years in a bunker to protect themselves from the scary things that exist out there.

One day Joel Dawson decides to risk his life and leave the bunker to go in search of the chance to find his ex-girlfriend, going through various dangers and learning important lessons about life.

The Netflix original film tells a moving story, based on true facts, of much overcoming and life lessons for our daily lives.

Amberley is a young woman who wanted to become one of the greatest rodeo champions in her country, until one day she is in a car accident that leaves her a paraplegic.

But even so, she doesn't give up on chasing her dreams.

13. The Star of Bethlehem

The Star of Bethlehem brings the story of the birth of Jesus Christ in a very fun way.

The donkey named Bo, takes the courage to free himself and go in search of a better life.

Alongside his friends, he begins a journey that makes them the main characters in the story of the first Christmas.

In order to find a place for their dog to stay, as the orphanage they live in is not allowed, brothers Bruce and Andi find an abandoned hotel and make it the best home for the dog.

It soon ends up attracting other strays, but the canine hotel is threatened when neighbors start to get annoyed by the barking.

So Bruce and Andi have to do everything they can to keep paradise safe.

On her first day as a nanny, young Kelly Ferguson has to deal with an unexpected situation: the kidnapping of the boy she was caring for by monsters.

She then meets a secret society, where nannies are responsible for protecting children from all kinds of monsters.

Together, they begin the quest to save the boy's life.

Mia is a young girl who lives on a farm, where Charlie, a white lion, was raised along with her, and they built a very strong bond of trust and a true and genuine friendship.

Until one day, Mia's father decides to sell the lion to hunters, forcing Mia to have to flee to save her best friend's life.

“Seventeen” is a Netflix production, which tells the story of Hector, a 17-year-old who lives in juvenile detention.

Part of the rehabilitation process is having a visit and taking care of Oveja, a dog who ends up totally winning your heart.

When Hector notices Oveja's absence, he discovers that the dog has been adopted by a family and he decides to run away just to find his friend.

The widower Emílio lived his life normally trying to deal with the loss of his wife.

Until one day during his routine exams, he is diagnosed with early Alzheimer's.

Shortly after leaving the doctor, he ends up bumping into Julia, his abandoned daughter who is now a doctor.

After that occasion, he decides to take advantage, while the illness is still in its initial stages, to find an old love again.

Together, they embark on a fight for survival after robots take over their city.

Enola Holmes, sister of Sherlock Holmes, is as skilled and intelligent as her brother.

She also has the power of deduction and will need to use it to find her mother, embarking on a dangerous and mysterious adventure.

Finally, our last recommendation is for you and your family to laugh until your stomach hurts.

So it's double laughter guaranteed!

In Gente Grande, a sad event causes 5 friends to get together and strengthen their friendship again.

They then decide to take a trip, together with their families, and they will need to recognize that youth is no longer so flourishing.

Check out the trailers for Gente Grandes 1 and 2, in sequence:

add a comment of Netflix Family Movies: The 21 Most Recommended