How to play truco online: 10 options

Author and references
How to play truco online: 10 options

It's zap, hunchback! Only those who have already won the truco round with the strongest card in the game know how to feel like the king of strategies. Or still manage to win the points by asking truco and having a weak card, the famous bluff.

Nowadays it is no longer necessary to meet in person to be able to play this classic game.

There are several ways to how to play truco online, check out some websites and mobile apps where you can challenge your friends and test your skills against people from all over the world.

In this post, you will see 10 options on how to have fun playing truco online now.

It is worth mentioning that the apps listed will be of two types of the game: the truco mineiro and the paulista, the most common rules of this game.

how to play truco

If you don't know how to play truco, but would like to learn, you can take a look at the PDF file of the Public Servants Union (SINSEP).

That said, see the best sites and apps for you to play truco online and even offline.

On the Jogatina website, you can play truco paulista. Just create an account or login with Gmail, Facebook or Outlook. In addition to truco, it is possible to have fun with other games, such as: Buraco, dominoes, bingo, lock and poker.

In the case of the hole, you can download the app available for Android and iOS. It is also important to note that to play some games on the site, you need to download a small app to your computer. 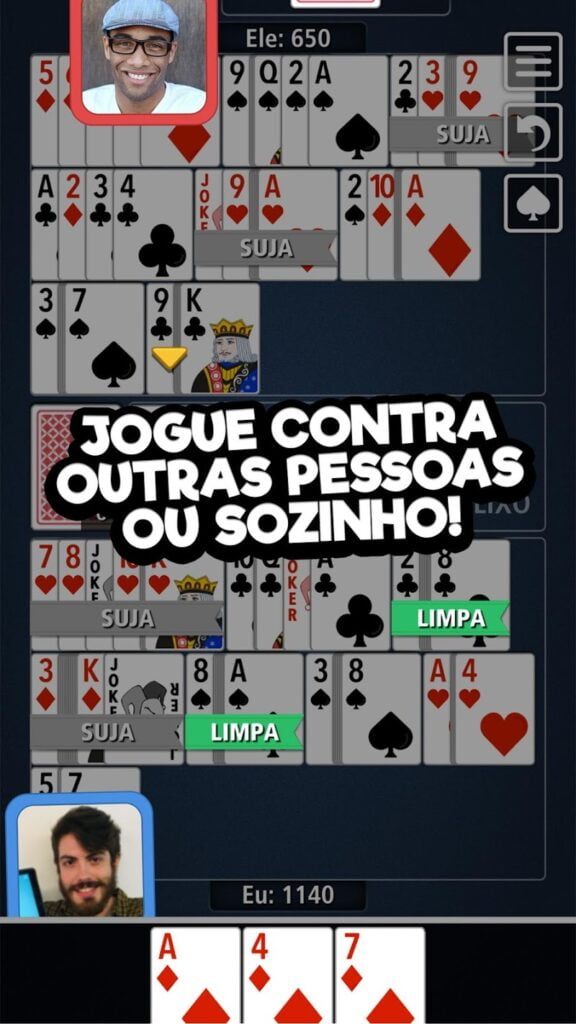 Truco On has a very beautiful and interactive website. Right on the homepage, you can see how many people are online playing and choose the platform you want to use for fun.

You can play on computer, Android, iOS and even Windows Phone. You don't need to log in to start a match, meaning you can play anonymously.

Players can choose to play truco mineiro or paulista.

In addition, the app has very interesting features, such as: adding your favorite partners, and thus knowing when they are online and sending them an invitation to play; play offline; it is possible to watch the games you participate in and it is also possible to create personalized rooms with your name, password and rules. 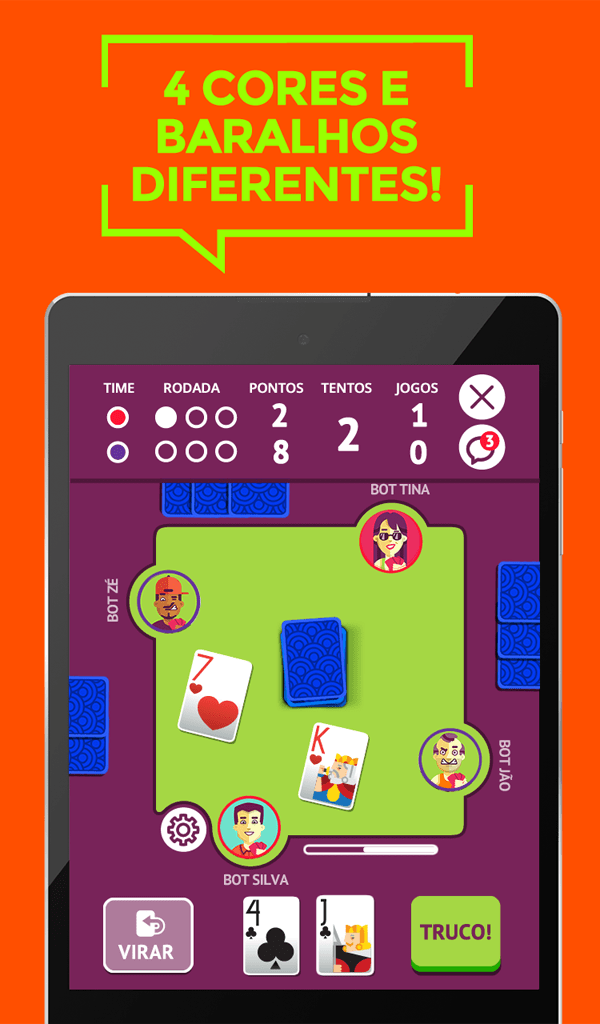 In Truco Online – Paulista e Mineiro, as the name of the application itself suggests, users can choose one of these two modes of the game. In it, it is possible to play in singleplayer and multiplayer, having the possibility to choose the level of difficulty.

Thus, the player can send the challenge invitation to pairs around the world. In addition, it is possible to play without having to create an account.


The app is available for Android, iOS, Windows and online. In this last option, you need to install Adobe Flash Player in your browser.

The developer of this game has produced dozens of games. You can see them all on the MegaJogos website. If you are not only interested in truco, you can choose other games.

In addition, it organizes online tournaments for various games.

Copag, one of the largest manufacturers of playing cards in our country, in a partnership with MegaJogos, mentioned above, made the game Truco – Copag Play. In the game, users can play alone against boots or online.

The app is available on the Google Play Store and the Apple Store.

In Pro ranked games, players can choose the rooms to play in according to the available game currency balance. Every day it is possible to have access to the tournament rooms, and the Pro Tournament is open to everyone and the VIP Tournament are available to players who have the access password. 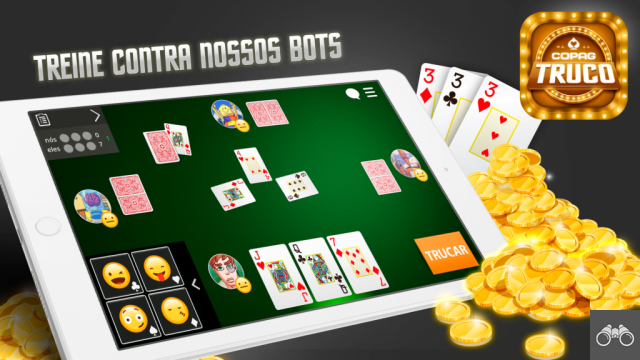 Truco Vamos: Have Fun Online Tournaments is only available for devices with the Android system. Here you can also choose to play truco mineiro or paulista, and in doubles matches (2 vs 2) and/or alone (1 vs 1).


The app is free, but within it there are options to spend real money to buy “gold”, the in-game currency, which allows you to participate in Pro tournaments.

In addition to truco, whoever downloads the app will also be able to play dominoes.

Regardless of the game, users can share game results and invite friends to participate in game rounds.

Truco Our Country – Truco Online has a very simple and easy-to-use look, which helps players who just want to sit back and have fun, without much ado.

In this app, you can play truco mineiro and paulista in free games or using game coins in VIP tournaments. A differential of it is that in addition to written chat, it is possible to chat by voice.

The app is available for Android and iOS. According to the developer, computers will soon receive a version. s

The app already has more than 1 million downloads and has a 4,5 rating on the Google Play Store.

Truco Animado is a little different from the others, because it has a very original design.

In this game we can customize the more than 100 characters available with clothes and hats. Regarding the game options, people can choose to play truco from Minas Gerais or São Paulo. In addition, it is possible to have fun online or offline.

In online mode when the rooms have an insufficient number of players, it is open for players to enter even with the game in progress, making the match not fall.

In offline mode, you can find themed maps and stages, leagues, championships and events. The game also has bosses throughout the maps.

The game is available for Android, iOS and PC. 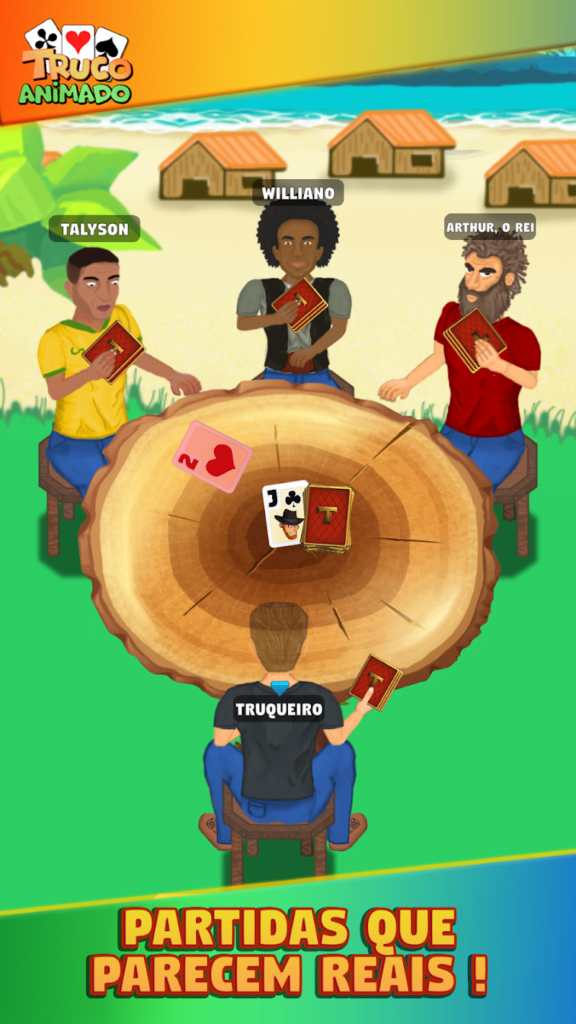 The app is free, but there is also the possibility to become a VIP player, which will bring some benefits. In addition, players can spin a roulette wheel every 20 minutes and receive prizes.

The game is only available for Android.

A tip: if you are going to download this game, also visit the developer's Facebook page, as the community on this social network is very nice and players usually interact a lot in the posts.

LG, a famous home appliance brand, also has a game, in this case, the LG Smart Truco – Free Online.

In it, players can participate in online or offline matches challenging the game's artificial intelligence (AI).

In addition, it is possible to play with friends via Bluetooth, a very useful feature if you don't have internet in the place you are and want to participate in that good game.

In this way, players can choose between the Minas Gerais or São Paulo truco, with the deck being dirty or clean. It is also possible to determine whether you prefer to play the iron fist: light or dark.

Another point that is important to highlight is that it is possible to create a room and customize its rules.

And if the person doesn't know how to play, the user can consult the tutorial inside the game. The app is available for Android only.

Closing the list, if you want to have a very different truco game experience from all the apps listed, download the Truco Blyts app.

It already has more than 10 million downloads on the Google Play Store, with a score of 4,5, and has received more than 500 reviews.

It is important to note that the application is only available in Spanish. Another point that also needs to be highlighted is that it has not been updated since October 2022.

Anyway, if you want to download the app, it can be found on the Google Play Store and the Apple Store. 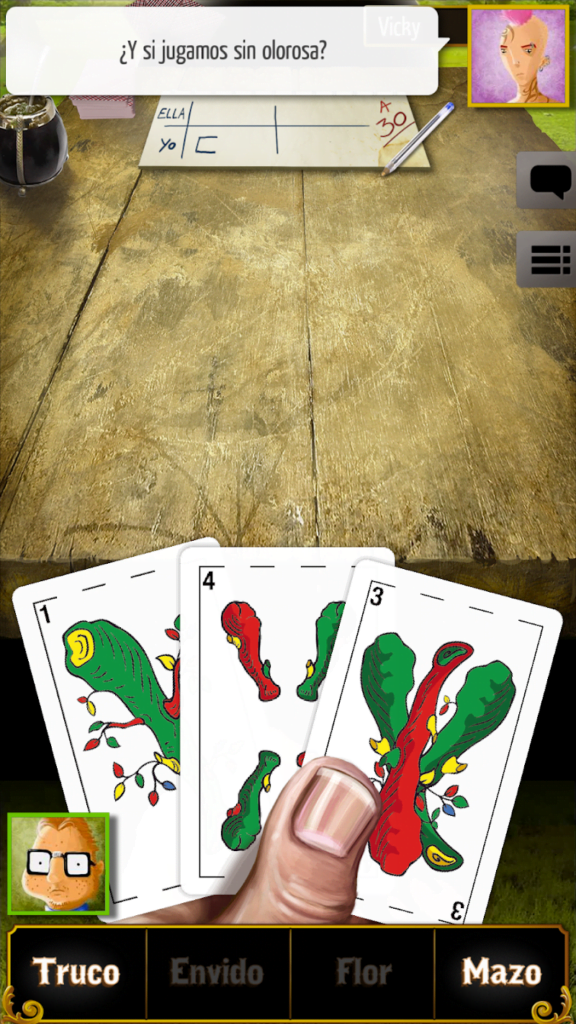 If you've always been good at traditional truco, the one we play at a table with friends, it's a good idea to challenge people from all over the world in online matches to test your skills and strategies.

Above all, play truco with your friend “pato”. That way, regardless of the application you choose, it's worth spending a little time to have fun playing truco.

Audio Video How to play truco online: 10 options
How to Merge PDF: The 9 Best Ways ❯

add a comment of How to play truco online: 10 options