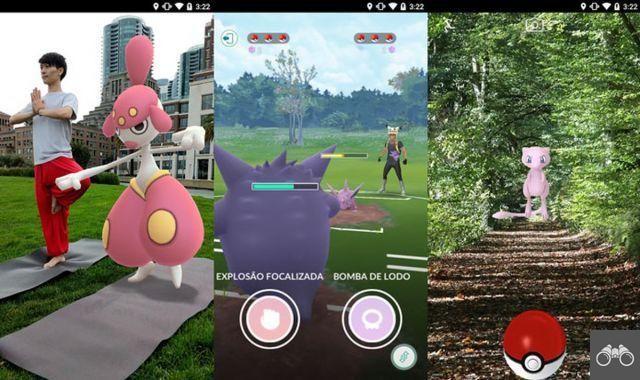 One of the biggest game franchises in the world, which, in its 25 years of history, has gone through different platforms and generations of video games and has numerous titles, Pokémon has expanded beyond the world of games and Nintendo consoles, with movie franchises. , series, theme stores, manga and many other products, both physical and digital.

The Pokémon phenomenon began in games, with the release of the first two games in the RPG franchise in Japan in 1996, called Poketto Monsutã Midori, or Pokémon Green, and Poketto Monsutã Aka, or Pokémon Red. Pokémon Green was never released in countries other than Japan, but the Red version of the game, as well as Pokémon Blue, another version of the title, were released worldwide.

The games quickly gained success, becoming one of the best-selling games in Japan in 1996, gaining several special versions and future remasters, such as the Pokémon Yellow: Special Pikachu Edition version that featured the famous Pikachu as the main pokémon that accompanied the protagonist of the game. game throughout history.

The game mechanics of the first titles released in the franchise followed the molds of turn-based RPGs of the time, with battles divided between turns, in which, in addition to skills, it is also possible to use items for your pokémons, and there is also the option to escape from the fight, in case the player realizes he has no chance of winning and wants to save his team's hp and items in his inventory. Each battle gained gave Pokémon experience, which gained skill points to strengthen characteristics and, after a certain level, evolve.

This game concept is still present in the games of the main game franchise to this day, with some modifications and updates for the new generations of consoles for which they are developed.

Despite the main Pokémon franchise, distributed by The Pokémon Company, being developed exclusively for Nintendo consoles, the success and expansion of the franchise reached several other platforms, such as smartphones, consoles from other manufacturers and the PC.

These games released outside the main franchise have different styles of play, leaving the traditional turn-based RPG and inserting the pokémon universe into other styles of gameplay, such as MOBA games (Multiplayer Online Battle Arena), platform games, MMOs and many others. .

Check out a list of some of the Pokémon games available for PC.

Pokémon Planet is a simple but very accessible game, requiring no HD space and running directly from the internet browser, such as Google Chrome or Safari. To play, just register by creating an account with an email and a password,

The game is similar to the first titles in the franchise, released in the 90s for the Game Boy handheld console, with simple graphics and limited animations, such as pokemon blows, which have no animation and only display the damage done.

Despite its simplicity, the game offers an experience similar to the first games in the franchise and can be accessed easily, simply and for free.

Another MMORPG inspired by the popular game and animation franchise is Pokémon World Online. With graphics a little more complex than the previous game on the list, which resemble games developed for the Gameboy Advance, the game has two explorable regions and more than 300 pokemons that can be caught.

In addition, the game has missions for players, an open world with PvP (Player vs Player) system, periodic events, gym battles and even rare pokemons offered on special occasions.

The combat system available in the game is very similar to the original pokémon franchise, available on Nintendo consoles, with options to attack with a pokémon blow on the field, switch pokémon, use inventory items or run and escape the fight.

As its name implies, the game is an MMO (Massive Online Multiplayer) version of the pokémon universe, in which it is possible to find other players and battle in groups, in dungeons or battles against gym leaders, in search of rewards, such as badges .

The look and feel is very similar to classic pokemon games, and the game continues to be updated to this day, with the addition of new maps, updated dungeons, and new pokemons.

PokeMMO can be played on both PC and Smartphones with the Android operating system, and is free, but has microtransactions of some cosmetic items.

Created by fans in 2022, Pokémon Blaze Online is another MMO game from the franchise that is available for different platforms such as PC, Android smartphones and iOS devices.

The game has new regions, different from the anime and the main games of the franchise, and beautiful and relatively detailed graphics, compared to other games of the genre available on the internet. Despite this, it does not have Pokémon attack animations in battles or detailed visual effects.


Pokémon Blaze Online still has a system of clans, which have daily battles in a PvP system with specific levels and attributes for different types of pokémon, in addition to gym battles with rewards.

PokéOne is one of the most complete and feature-packed MMORPGs available for free on the internet. With the areas of Unova, Kanto and Johto available for the player to explore, the game has very beautiful graphics and battles, based on the 3D maps of the games released for the latest versions of Gameboy.

The game also has a system of levels and skills, missions updated daily, guilds, mounts for your character, customizations for your pokémon trainer, PvP (Player Vs Player) and even a pokémon exchange system.

Another free and lightweight MMORPG from the pocket monsters franchise is Pokémon Down. As it runs directly from the browser, the game does not take up space on the HD and can be played on the vast majority of PCs, regardless of processor power or the presence or absence of a dedicated video card.

Because it is very light and simple, the game doesn't have many features and has a modest graphic, but it features a day and night system with the appearance of specific pokémons, depending on the time of day, in addition to battles similar to those of the franchise's traditional games. and a system of levels and evolutions.

With a different proposal from the other games presented in the list, Pokémon Trading Card Game Online is a card game in the franchise and one of the only ones officially released and licensed by The Pokémon Company.

The game is free and allows PvP matches against players from different parts of the world, who reward the winners with coins to acquire new cards and expand their deck.

In this pokémon card game there is also an offline mode, which also gives players rewards when they win battles, in addition to other game modes.

With a vast, fully explorable open world and quite complex and beautiful 3D graphics as its main attractions, Pokémon MMO 3D is an MMORPG a little different from the others on the list, because instead of the turn-based combats, traditional of the official franchise games, it offers real-time battles where you must attack, defend and use skills manually.

Despite having some bugs and limited animations, the game has a structured level system and a day and night cycle, with specific Pokemon appearing according to the time of day, in addition to being updated periodically with new features and fixes.

Another game set in the Pokémon universe but with a different proposal from traditional RPGs is Pokémon: Type Wild, which introduces a 2D fighting mechanic, similar to games like Street Fighter, with Pokémon.

Despite having few playable pokémons, the game has control support and well-made animations of skills known to fighters.

How was Pokemon created?

The very name of the franchise, placed in honor of the little monsters known to players and protagonists of the story, is an abbreviation for Pocket Monsters, Poketto Monsutã in Japanese or Pocket Monsters in Portuguese. They have different special abilities, different species and origin stories, their own personality, and unique interactions and relationships with other Pokémon.

The idea behind the Pokemon universe came to its developer, Satoshi Tajiri, together with his colleague Ken Sugimori, in the early 90's, with the launch of the Game Boy, a portable console developed by Nintendo. Inspired by a hobby he had as a child of collecting insects, Satoshi created the universe of monsters that, currently, has expanded beyond the world of games and has his own company, called The Pokémon Company, which licenses the brand to several companies and owns own products and exclusive collectible stores in some parts of the world, such as Japan and the United States.

Currently, it is responsible for all management, publicity, marketing and licensing of the Pokémon franchise, and was created in 1998 after the resounding success and need for expansion of the brand. Despite having offices and stores in different locations around the world, such as the United States, Australia and New Zealand, the company's headquarters are located in Tokyo, Japan.

Even with numerous versions for different platforms, most games in the Pokémon franchise shared stylistic characteristics, such as the world, characters and the famous little monsters protagonists of the games, and also have common goals, such as completing the pokédex, which is the device which shows the amount of captured pokémons in relation to the amount existing in the game, and battle with other players, winning individual battles or against gym leaders to evolve your pokémons and strengthen your team.

Through these goals the player can become a Pokémon Master, main aspiration of many titles in the franchise both in games and in cinemas and on television and animated series, with characters known by fans of the franchise on screens such as Ash evolving over the years and becoming a Pokémon Master in some of these movies and animations from the Pokémon universe.

The division of Pokemons by generation

Currently, there is an infinity of Pokemon, which are divided into generations, which are released according to the evolution of the franchise games. For example, the first generation of pokémons, which brought most of the little monsters best known to the public such as Bulbasaur, Charmander and Squirtle was released in versions of the first games of the franchise, Pokémon Green, Pokémon Red and Pokémon Blue.

In subsequent releases, new generations of Pokemon are released, thus keeping a wide variety of characters and teams available for the player to create. Generally, the Pokémon released are based on natural elements, such as fire, water and earth, but there are some that deviate from this pattern and have different abilities, origins and appearances.

The vast majority of them have evolutions, which are gained by gaining experience in battles against gym leaders and other pokémon trainers, changing the appearance and also the abilities of the little monsters.

The last existing generation was announced this year, in 2022, with the announcement of the release of Pokémon Scarlet and Pokémon Violet, new games in the franchise developed for the Nintendo Switch with a release date of 2022.

The Pokémon anime, which was also largely responsible for the popularization and success of the franchise, was released in 1997, a year after the game's release. It follows Ash, a 10-year-old boy who begins his journey to become a Pokémon Master alongside his starter Pokémon, Pikachu.

With the success of the anime, several other animated series, films and other audiovisual works of the franchise were made, including a live action feature film with famous actors such as Ryan Reynolds called Pokémon: Detective Pikachu.

Discover all the Pokémon games for Android and iOS in 2022 ❯