The 5 Best Free Voice Recorders for iPhone and Android

Having a good voice recorder on Android or iOS is very useful for those who don't want to miss any details of a class or a work meeting, for example. Many of them offer features that go beyond capturing audio, such as editing the content and sharing it with other applications.

By default, Android phones do not have a voice recording app natively. This, however, can vary by manufacturer, as companies customize the system and install their own programs.

iPhones, on the other hand, have a native app with this function, the Recorder. To use it, just open the program and tap the red circle icon to start capturing. To stop, just press the circle again. The content is automatically saved on your device and on others that are logged into your iCloud account.

Attention: the capture and reproduction of audio content without the authorization of one of the parties involved may constitute a crime.

If your smartphone doesn't have the feature or you want to try other options, check out our list of the best free voice recorders for Android and iOS.

As its name suggests, Easy Voice Recorder is quite easy to use. The app's home screen is already the recording screen and the clean interface makes it very clear what needs to be done. If you want, before capturing, you can change the suggested file name.

Then just press the button signaled by a microphone to get started. To check the result, share it or even set it as a ringtone, access the listen tab, also on the program's home screen. 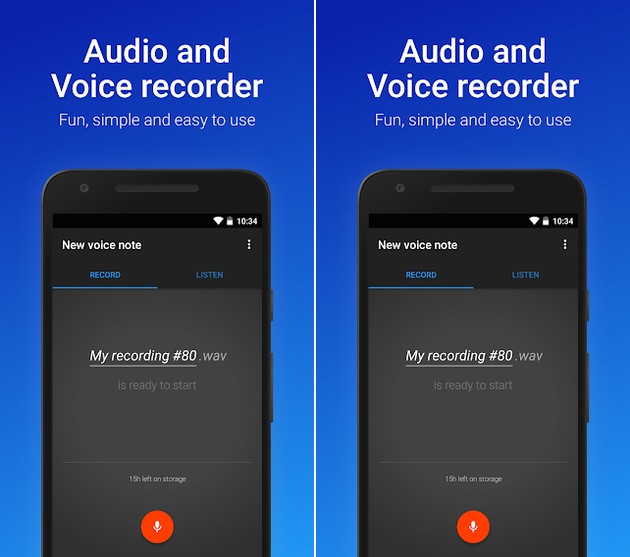 In the application settings, you can set the type of use for microphone adjustment, between voice notes, meetings and lectures, music and pure sound. The user is also able to change the file format between WAV (best quality), MP4 (balanced size and quality) and AMR (smallest size and quality).


For those who are interested in carrying out the recordings in a hidden way, you must access the item Interfacein the settings, and activate the switch related to the option Hide lock screen notifications. Therefore, after locking the device's screen, nothing will indicate that the audio is being captured, not even the program icon.

Easy Voice Recorder is available for free for Android and iOS devices.

More than an app to capture ambient sound, Voice Recorder also works as an audio editor. It can be used both in recordings made on the spot and files from your smartphone.

With an intuitive interface, it allows recording directly from the home screen, through the red button. To edit the content, go to the play icon with a headset. 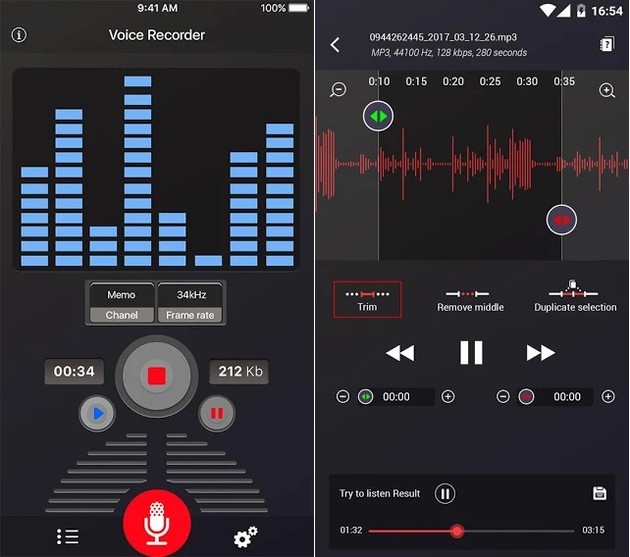 Then choose the track and then go to the scissors icon. Through the tool, it is possible to cut, remove and paste parts of the audio, as well as change the playback speed.

In the settings, the user can select the file format for MP3 or WAV and change the sensitivity of the microphone. It is also able to choose the recording quality (between MONO - 11 kHz and MONO - 44 kHz) and choose to hide the icon in the status bar, to facilitate hidden recordings.

The Voice Recorder app is available for free for Android devices.

Voice Record Pro has a classic look, but that doesn't mean it doesn't offer modern functionality. Recording options can be set before starting the process. Thus, by touching the traditional red button, the user is able to choose the quality and file format, between MP3 and M4A.


For more advanced settings, go to the tab Advanced. In it, it is possible to select the sample and bit rate, if the reproduction will be mono or stereo, among other features. 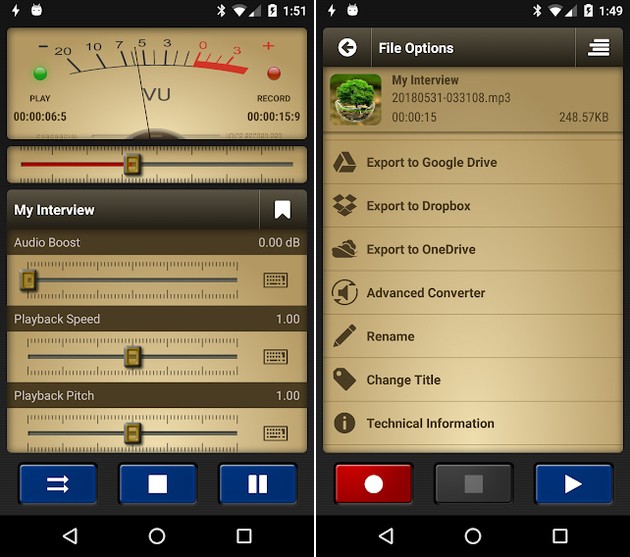 With everything set, just press the red button one more time. Timestamps can be added while recording, to remind you of an important part. There is also the option to include text notes in the files.

Once the registration is complete, the content can be sent by email or to YouTube, shared with other apps, as well as stored in the cloud via Google Drive, Dropbox and OneDrive services.

Voice Record Pro is available for free for Android and iOS devices.

Another app with a very intuitive look, which makes the user's life easier. To make the recording, just press the red circle, which is written Press to Record. Before, it is possible to name the file and choose the quality with which you want the record to be made. 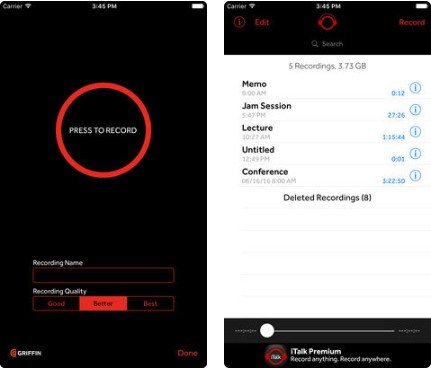 According to the manufacturer, the application supports iTunes file sharing, as well as ensuring the sending of audios by email within the app itself. The list of recorded contents is always arranged in alphabetical order, to facilitate the search.

iTalk Recorder is available for free for iPhone, iPad and iPod Touch running iOS 7.0 or higher.

This smart recorder is capable of identifying moments of silence and automatically pausing the capture. To start recording, just press the red button in the very center of the home screen.

At the end of the process, name the file and, if you want, share it with other apps. The content is stored in the folder Recordings, also available on the program's home screen. 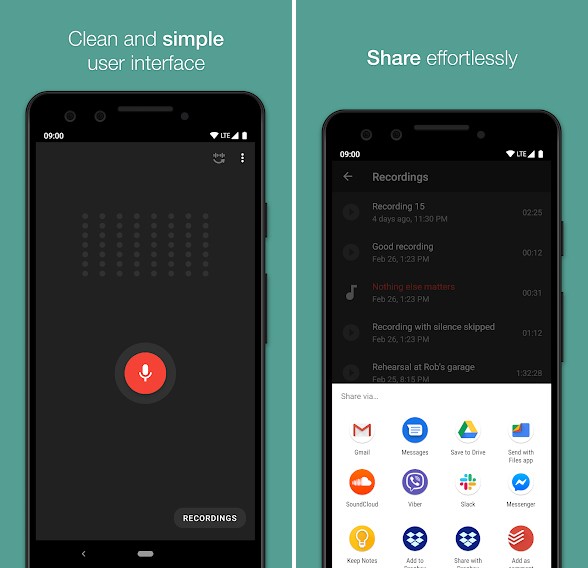 To activate the option to pause during silence, it is necessary to access the sound waves icon with an arrow and choose Automatic. The app's settings are accessible through the three dots icon.

It is possible to configure to pause the capture when receiving a phone call and activate the do not disturb mode so that the device does not emit sounds during the process. The program also allows you to select the sound quality between 8 kHz and 44.1 kHz.

Smart Recorder is available for free for phones with Android operating system.

The 7 best antivirus to protect your phone ❯