Birthday cakes for men: 100 ideas for every taste

Author and references
Birthday cakes for men: 100 ideas for every taste

Are you looking for male birthday cakes? Whether it's for your birthday or someone else's doesn't matter. Here we've separated 100 cake inspirations for all ages and all tastes. I'm sure some of these creative ideas will help you.

One of the goals of these texts is also to break the taboo about age. No matter how old you are, that doesn't stop you from having a themed party and choosing a decor that suits you. Don't be afraid to dare and abuse creativity.

To show that it is possible to do male birthday cakes at all ages we organize the first photos by age group. That way, if you want to give someone else a gift, you can follow the tip of being based on age to better understand the taste.

Cakes for newborns are usually very colorful, with animals, cartoon characters or children's movies. We separate versions for both tastes, for those more traditional who like something simpler and also for those who prefer to abuse colors.

Some parents prefer to use lighter shades of blue and not add too many flashy elements, but this is not a rule. Just because your child is a boy doesn't mean you need a light blue masculine cake. 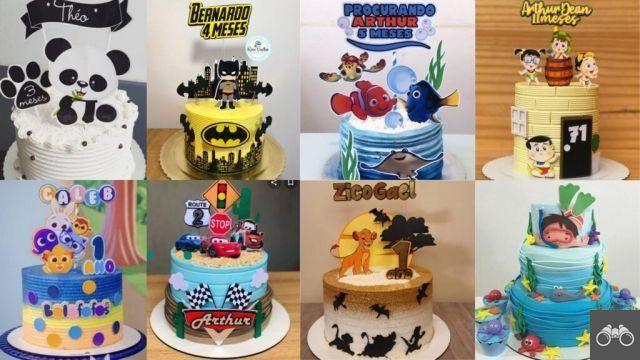 In the newborn stage, it is usually the parents who choose the style of the cake, as the baby is still very small and has no idea what he likes. But when they are children, they already know which design they like, the color they prefer, and which style suits them best.

Thus, the children themselves begin to show a desire for a particular decorated cake. From there, you can have the cake made at a bakery that has experience with confectionery or look for something similar in online stores and order it to be delivered at home. 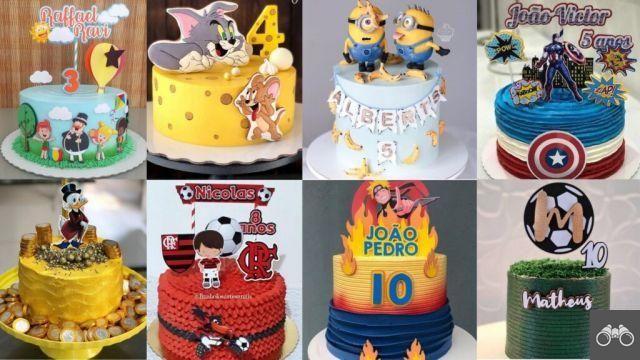 This age group is more complicated, as teenagers have their hormones boiling. Tastes change and they start to feel ashamed of continuing to like the same children's drawings.

Teenagers are in between the transition from child to adult so there are a lot of inner conflicts and it can be hard to understand. But to choose cakes is not that complicated.

Some may prefer sports themes and honor the team at heart. Others maintain a taste for drawings, but adapt to animations aimed at the age group. Anime, for example, are Japanese cartoons that involve certain teenagers and this taste remains until adulthood.

But if that's not your taste, there are other options. One topic that you can't go wrong with is choosing something related to video games. Young people in general love games, whether they are mobile apps, computer or playstation. When in doubt, bet on this theme. 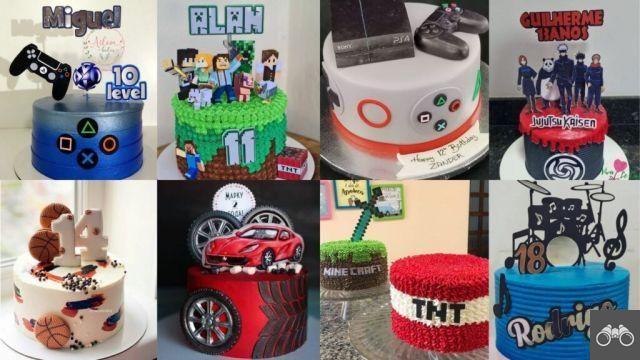 From the age of 18 until reaching the age of 30, there is a transition in life perspective and tastes. The phase is still marked by the taste for games and figures that marked the person, such as a movie for example.

Here you can choose to discover a game that the birthday person has the habit of playing, be it virtual or card games, characters from emblematic films, cars that the person enjoys, if he is a motorsport lover.

Or you can opt for simpler cakes that do not refer to a specific theme, such as adding mustaches in the decoration and items that refer to the occasion of the party, such as sunglasses and trees, if the celebration is held with a barbecue and pool. 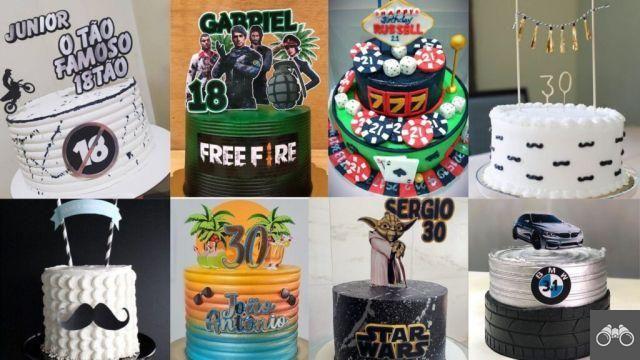 In this case, it is necessary to know well the personality of the adult and if he is more of the playful or more serious style. There are versions of cakes that are really good if the person enjoys joining in on the fun. This cake of the angry character and the “Father is on” are clear examples of this.

It is also possible to use the age numeral of as creative, as when the person turns 51 and uses the famous cachaça as a theme. But for those who don't want so much boldness, there's a way to use that idea of ​​being based on the birthday celebration. If the party is at a barbecue, bar or casino, you can add elements that refer to the place. 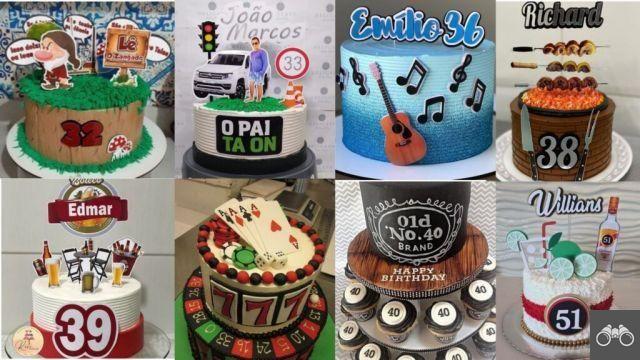 Now it's time to prove that you can have a birthday party for older people and make this moment unforgettable. If the birthday person has a hobby or a great passion such as fishing, taking care of cattle, if he is a farmer, we have options in the image below.

Many of them appreciate a good beer or a good wine and may even joke about the phrase “the older the better”. Others have a huge love for the profession, or are big fans of a band.

And there are models of cuter cakes that are made as a tribute to the family. The 65th birthday cake contains the phrase “Happy birthday grandpa Julio”, imitating a word search. The 70th birthday cake with 3 layers is also very special, because it refers to the importance of the person in the family. In the first layer it shows the man as a grandmother, in the second as a father and in the third as a husband. 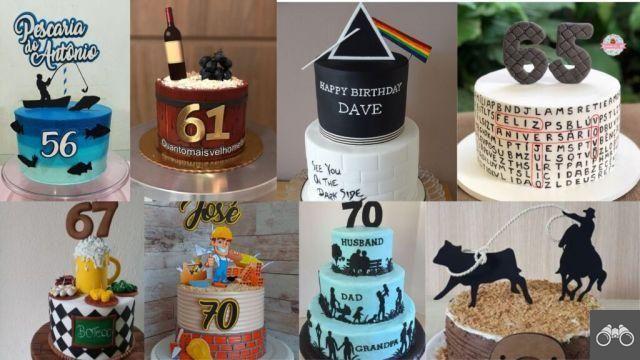 Here we find cakes based on professions and personal tastes. It is a form of tribute to the work that the person carries out that has no age restriction. This type of cake is for those who have just graduated or for those who have been working for a while. 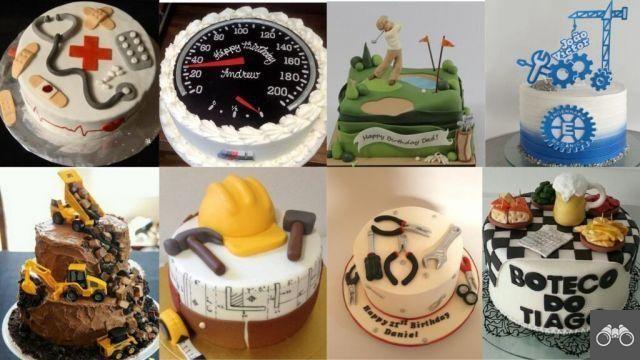 Due to the new cinematographic productions involving the superheroes of yesteryear, they gained even more presence in the market. As it is a highly requested theme, cakes with special decoration are usually well elaborated and are the dream of any lover of movies and comics. There's even Batman's black cake that draws a lot of attention. 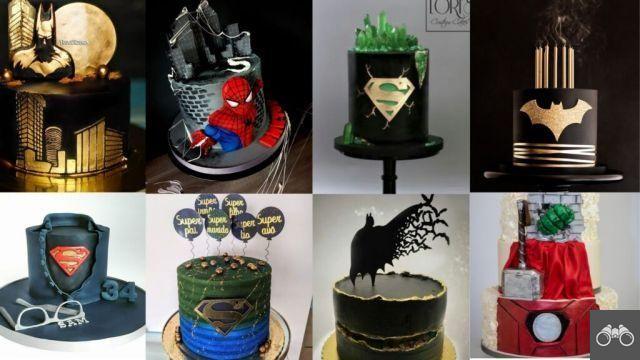 Great choice for those who are addicted to watching movies, series and love going to the movies. Lately, the most requested themes involve Netflix series, the Friends series, the Lord of the Rings movie and elements involving the Harry Potter saga. Even after years without renewing films, the universe of Harry Potter magic involves many young people and adults who followed the height of the franchise. 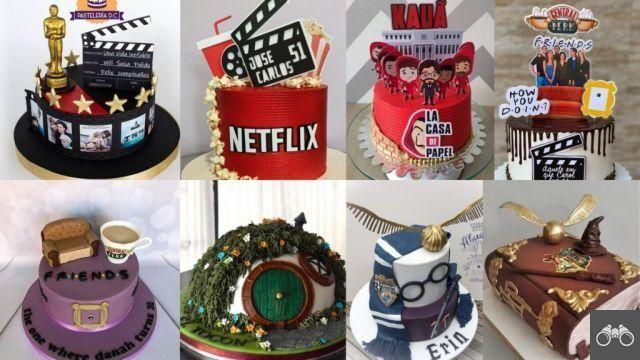 It's the most cliché idea there is, but still many still prefer the traditional cake representing the love of the heart team or even reproducing the football field with grass, the markings on the field and the goal. Who has never been to a party that had a cake like this? 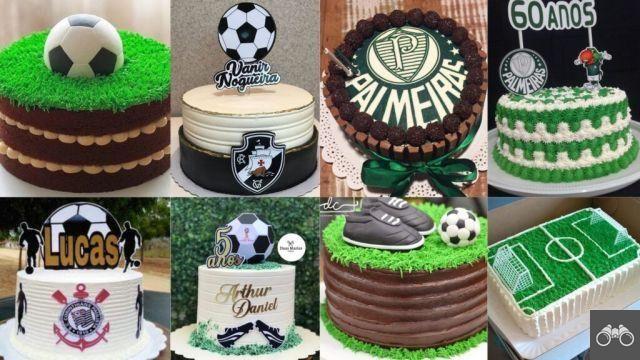 If you want to have a good laugh and have a very relaxed birthday, these ideas will be for you. Usually these cakes are used to troll the friend who is having a birthday, but other times the birthday boy himself has a peculiar taste.

Below you can see another version of the troll. This simpler round cake style with an iconic phrase is easy to reproduce or order in custom bakeries. 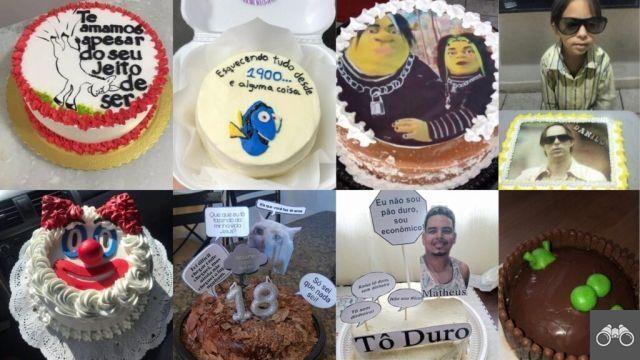 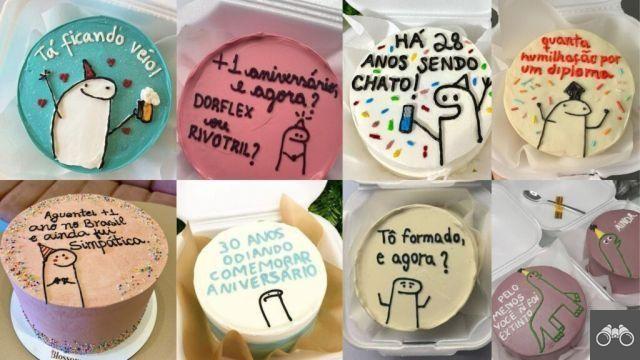 As your birthday approaches, you have no more excuses for not making a creative and themed cake that you like. Take advantage of these ideas to start thinking about the troll you can do with your friend or the tribute to a dear relative who still insists on not celebrating birthdays because of age.

add a comment of Birthday cakes for men: 100 ideas for every taste