Android games: check out the 20 best games for mobile and tablet 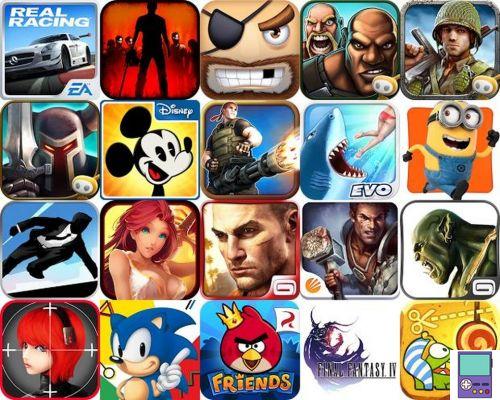 The Android system user has several game options to have fun on their devices! The catalog is so varied that anyone could spend days researching and trying out countless games, without repeating any. To make your life easier and help you find the ideal entertainment for you, we have separated 20 of the best Android games in 2022.

Check out our list of the best Android games of 2022 to play on your phone, tablet and even on Windows 11 that allows you to install Android apps natively and easily. Enjoy!

A phenomenon among gamers, Call of Duty arrived on Android devices with great success and breaking records. The mobile version of one of the most famous games in the world managed to translate the multiplayer experience from computers and consoles to mobile devices. With Call of Duty Mobile, you can play different battle modes against other players, especially if you choose the Battle Royale mode. For those who prefer to play alone, there is the zombie mode, which is also very interesting.

Constantly updated, the game always brings new content and events to its users. If you are a fan of FPS, this is a must have game to have on your mobile device!

Another phenomenon for the list! Another hit among gamers, Minecraft definitely changed the gaming landscape and became the inspiration for many similar games. Its Pocket version is very similar to the original, with the difference that it has a smaller world and fewer resources.

The coolest thing is that Minecraft Pocket Edition is a game that can amuse all audiences, even the youngest players, as it visually resembles classic LEGO bricks. This is not to say, in any way, that older players are bored with this game - even because it is great for those who love to take on challenges and build increasingly complex worlds!

One of the most played games in 2022, Among Us became a real trend during the period of isolation in the coronavirus pandemic - but its success continues to this day, see? In it, you and nine other friends have the opportunity to play with each other. The game's graphics are not simpler than its dynamics: nine players are the crew of a spaceship and must fulfill their tasks. The remaining player is the imposter, whose only task is to kill all crew members without being discovered.

And that's why Among Us has become such a success: the coolest part of the game is not just doing your tasks, but creating strategies with the other players to find out who the imposter is. This dynamic generates a series of accusations, defenses and, of course, lots of conversation and fun!

Of course, the most beloved Battle Royale among mobile gamers would be on our list! Free Fire Battlegrounds is a great game option for those who like to play multiplayer. In this game, you start your adventure on an island with over 50 players – and you can choose to play alone, in pairs or in a foursome. The objective is to survive and win each battle. Whoever is alive at the end wins!

The game is full of very interesting features such as sniper rifles, automatic rifles and vehicles. In addition, it allows live communication with your team – making the dynamic even more fun!

The League of Legends franchise has won countless fans around the world. Its mobile version made it possible for even more gamers to join the battles offered by Riot to its PC players. The game for mobile devices is very similar to the original and adapts well to the needs of mobile devices.

If you enjoy augmented reality games, Pokémon GO is the perfect option to have on your phone. The revolutionary game makes use of the device's GPS to integrate its user into its dynamics, placing itself – literally – in their world! To have a complete experience, you need to put on your shoes and go out into the world, not forgetting your friends to accompany you on this incredible journey.

With Pokémon GO, you can capture, evolve and strengthen more than 600 Pokémon, experience epic battles, raids and even fight against Team Rocket. Fun for sure!

Gardenscapes combines two game dynamics: match 3, in which you have to join three identical pieces to destroy them, and simulator elements. The game works like this: each puzzle game gives you resources to improve your garden - whether with new decorations or repairs of broken things. With each new feature, you must play a game of a minigame so you can complete it and have new tools to improve your garden. The success of its simple gameplay was so overwhelming that it has already won a sequel, Homescapes.

We don't even need to talk about the success of the GTA franchise around the world. Its mobile version was as well received as the original, which is nothing new considering its graphics and gameplay that are pleasant for adrenaline-loving players.

If you are a fan of Knights of the Zodiac, you will surely love the game Saint Seiya Awakening! Based on the famous series, the game has dynamics and strategies that faithfully follow the story of the anime's arcs. The game allows you to play with your favorite characters, each with their unique and special abilities, who collaborate for your team in different ways.

For fans of games with simple graphics and few players! Brawl Stars is a battle royale, but it doesn't follow the pattern of most games in the genre. The matches, in addition to being smaller in terms of participants, are shorter – perfect for those who want to have fun without committing too much time to everyday life! The game's character catalog is pretty slim, with only 20 options, but its constant content and balance updates certainly make up for its simpler dynamics. Not to mention that, due to its lighter graphics, the game runs even on weaker devices.

When we talk about The Room, we're talking about one of the best point-and-click puzzles for mobile devices. The mystery game asks you to solve several original puzzles that are surprising for their quality. If you are a puzzle lover, The Room is the best option and can offer you hours of fun, as it is very immersive and immersive, with jaw-dropping graphics.

Shadow Fight 3's small fame doesn't match the great quality of its graphics and gameplay. The fighting game is full of striking characters and has several command buttons, which allows for a vast catalog of moves that make your battles even more interesting. The more you play, the more equipment you unlock - like weapons, armor and helmets to help you in your fights.

It's impossible to be a mobile gamer without ever having heard of the famous Candy Crush Saga franchise. Considered the greatest success of the match-3 genre ever made, the game has graphics and sound effects that leave anyone immersed in its thousands of stages, distributed among the various titles in the series. The game's difficulty level increases as the player progresses through the levels - with some of them taking weeks and weeks of gameplay to finally complete. If you are a patient gamer, this is the perfect game to have on your phone!

Do you like tower defense style games? Then you need to have Plants vs Zombies 2 on your mobile! The main objective of the game is to prevent a zombie invasion by means of cards that summon plants on the board – it seems easy, but it takes a real strategist not to see your unit dominated by zombies! And don't think that just the fact that they are zombies makes it easier: their opponents are different from each other and have different abilities, which means you have to adapt to each challenge to complete the levels.

If you like games that allow you to attack other players' units, Coin Master is a great option! The game has a simple dynamic where you get coins and other resources in a slot machine so you can attack other players' village. And this is how it gets addictive: the more times you attack your opponents, the more tools you have to fortify your own village.

For lovers of the DC universe! Injustice 2 is a fighting game that brings together more than 30 playable characters such as Superman, Batman, Wonder Woman, Joker, Flash, Bane and many others. With jaw-dropping graphics and enjoyable gameplay, the player can choose between playing in versus mode and in the progressive story mode, in which you can have fun for a long time until you complete all the levels and unlock your favorite characters.

Do you like survival games? Then Don't Starve should be part of your phone's games folder! Considered one of the most popular on the market, the game has a very immersive and very attractive experience for players. In it, you wake up on an island, where you have the opportunity to interact with almost every element and location. Your goal? Survive!

And don't think that it will be easy, as Don't Starve is pointed out as a game with a high degree of difficulty, as the map is automatically generated every match. Therefore, there is no point in looking for your resources in the same place as before, as you will always be in different locations. Not to mention that, due to the high level of interaction between the elements, the number of possible combinations and uses for each item is very large, so prepare to die several times until you learn the correct dynamics for your survival!

For extreme competitive gamers! If you like attacking games, in Clash Royale you can detonate the towers of each of your opponents by combining strategy, cards and defense. All this in real time, with enemies (or rather players) as real as you are. Each fight lasts three minutes and asks gamers to manage their decks of cards well, so as not to waste them at any opportunity.

Did you think the most famous football game in the world would be left out of our list? Never! One of the most popular console games, FIFA had its mobile version very well received by users. The more than satisfactory graphics combined with the great gameplay and varied content resulted in a worldwide success. The game options are numerous and conquer an increasing number of fans through mobile device platforms.FIFA has offline campaign, online leagues, PvP (player vs player), more than 500 teams, several game modes and much more!

Do you like RPG games? Then Shadowgun Legends will surprise you! The shooting game offers a very good single-player mode, but its success is due to the multiplayer, both in PvP (player vs player) and in co-op mode. In multiplayer, you can choose between 6 different categories for you to have fun while testing your skills against other players. In co-op, the in-game raid system makes you team up with other players to blast your enemies.

add a comment of Android games: check out the 20 best games for mobile and tablet