The 14 best apps to organize your routine

Author and references
The 14 best apps to organize your routine

The task of organize the routine it is extremely necessary not only to optimize your time or your work (whether it is face-to-face or home office), but also to optimize all your day-to-day activities.

You can do this with the help of a pen and paper. However, organizing a routine can be much faster and more practical if you use technology to your advantage.

There are several applications and programs focused precisely to organize the routine. The vast majority are available for Android and iOS devices. Others can also be used on the computer itself.

So, to make your life easier and for you to organize your routine, we've put together a list of some apps with this function and tips for using it.

Apps to organize your routine

Available on both the Play Store and the App Store, Google Tasks has a very simple interface and functionality. You can add your daily activities and goals, as well as detailed descriptions about each.

Although this is an app without many features and innovations, it stands out for doing what it proposes in an excellent way. Furthermore, the user can integrate the application with other Google tools such as Gmail and Calendar.

This is a Microsoft tool that mainly specializes in reminders. In addition to reminders, the user can also make notes of ideas and lists with their tasks, for example, and use them as an agenda.

To Do has a “My Day” tab, where you can check all the activities set for that day by you and mark the progress of each one to organize the routine. The user can even upload audio files, photos and videos.

If you don't want to use it on your smartphone, Microsoft To Do has a desktop version. It is also available for Android and iOS devices.

Available especially for users of Android devices, Memorigi is not available on the App Store.

With an interface with colorful icons and simple operation, this can be a good option for you to plan a task and organize your routine.

You can find organization categories like payments, readings, work, birthdays, ideas and more. Thus, it becomes a great option for not only daily organization, but also in the long term.

Memorigi also allows users to track the progress of each activity.

With several list templates that take into account the demand and goals of each user, TickTick also offers tools to help increase productivity.


These include a pomodoro timer, a self-mode to help the user focus on a task, and a feature to develop new habits.

Among the list templates to organize your routine, there are some such as: shopping lists, exercises, work activities and several other things for you to take care of everything you need to do.

The app can be found on the Play Store and the App Store.

Available for iOS and Android devices, Todoist offers a variety of alternatives for organizing your routine.

As expected, it has the classic checklist, but it also allows the user to create projects, in order to better develop the daily workflow.

Another feature worth mentioning is “Karma”, which are scores given to users whenever they meet objectives, as a kind of incentive.

But if the activity or objective is not done, you also lose a little score. 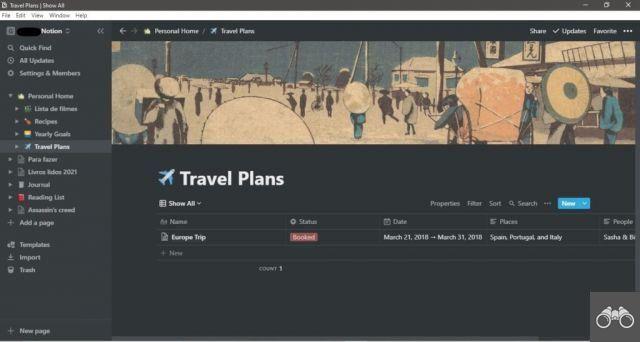 One of the most complete on the market, Notion manages to perform well every function it proposes. You can configure the platform for team management at work or for personal use.

You can create custom lists to organize the routine the way you see fit. The app already has some ready-made tabs, such as recipe organization, annual goals, travel plans, movie list, book list, diary and much more.


Notion also allows the user to integrate other applications and platforms into the system as well as allowing the insertion of web links, media files and various other things.

The app to organize the routine is available for use on Android devices, in the Play Store, and on iOS devices in the Apple Store. Notion can also be used on the computer.

You can use tags to organize the routine, in addition to inserting images and audios. The user can still share the notes and lists with other people and on social networks.

Google Keep was created precisely so that users can record their activities and ideas. It is divided into four parts: recordings, photographs, notes and lists.

Keep has a very simple interface to use. In addition, the tool transcribes voices and associates your reminders and notes with locations.

Another available function is image editing. Keep is available for desktop and smartphones for free.

You can also integrate Google Keep with other Google tools like Gmail, Contacts and Calendar.

We can say that this is Microsoft's Google Keep, as OneNote has several similarities with the previous application.

However, it also has some differences such as the fact that it can be integrated with Office programs and applications, such as Powerpoint, Excel and Word.

With the notebook, you can develop to-do lists, books to read, movies to watch and much more. If your friends also have OneNote, you can share all the lists and data you already have in the tool.

Through it, you can create a junction between Android and Microsoft to organize the routine. OneNote is available for desktop, Windows Phone, Android and iOS. However, you must have a Microsoft account to use it.

If you are looking to centralize all your demands and organize your routine in one place, AnyDo is the tool you need. Even if you don't have internet, your data, lists, tasks and goals are synced.

In addition, you can also share everything with other users, even videos and PDF files. Tasks such as Inserting notes, comments, subtasks and attachments are also some of the various functions that the app provides.

Although the service is free, there is also a paid plan with extra tools, as well as more space to do everything mentioned above.

Learn More: The 11 Best Apps and Tips to Sleep Faster

Organizze is an application for those looking to organize their financial routine.

It can be found on its website, on the Play Store or on the App Store, this tool allows users to create financial organization categories, in addition to providing graphs that show how the money was spent.

Users can also set alarms to remind them of bills that are close to expiry.

The app also has a feature where you can set goals. An example is having profits in a certain time to be able to travel, change cars, buy something and so on.

Only available to iOS device users, Timefull is suitable for people who want to organize their daily routine and the time you spend more efficiently.

Based on studies and algorithms, the app sets priority levels for each activity you have to do. So, daily you can see the activities from the most important to the least important and know which one to do first.

The application is also a program to understand the behaviors and needs of each user, that is, it can identify the times when it is most effective, during the day or at night.

With Bear, users can organize their routine with notes, to-do lists, include appointments and set notifications.

Furthermore, the app allows users to write articles and other types of texts, like a kind of diary or your diary, since Bear has a text editor.

The tool is available for computers and iOS devices on the App Store.

One of the best-known apps to organize your routine on the market, Trello can be used both on the computer and on Android and iOS devices.

The platform stands out for its easy-to-use interface, serving both work projects and personal organization.

You can create boards and cards to organize and keep activities categorized. You can also put descriptions, add people to each board to carry out the activities, set deadlines and much more options to organize the routine.

The 14 best games for WhatsApp ❯