Dragon Age 2 continues with the incredible narrative that Bioware has created for the universe of Thedas, the realm where the events of the franchise take place. Now we follow and live Hawke's journey that begins as a refugee and ends as the Champion of Kirkwall, being able to change the destiny of his kingdom forever. The game continues to focus on the moral and difficult choices we have to make that change the course of history, in addition to its intricate system of personal relationships. Despite slipping into some scenario creation issues, it still offers many, many hours of immersive gameplay.

The story is all narrated by his companion Varric, a dwarf with the gift of writing and a powerful imagination. He is being interrogated and gives a long recap of the legend about "the true story of the hero of Kirkwall".

The story is very good, despite not having the grandeur of the other games. Here we are not defending the world from extinction, but only our family and some local threats. This is not to say that the story is bad, it just presents itself less grandiose than the other games, but Hawke is slowly winning her heart, with his loyalty to friends, care for his family and willingness to help others. Not a Hero of Ferelden (Dragon Age Origins) or the Inquisitor (Dragon Age Inquisition), but it has its importance. 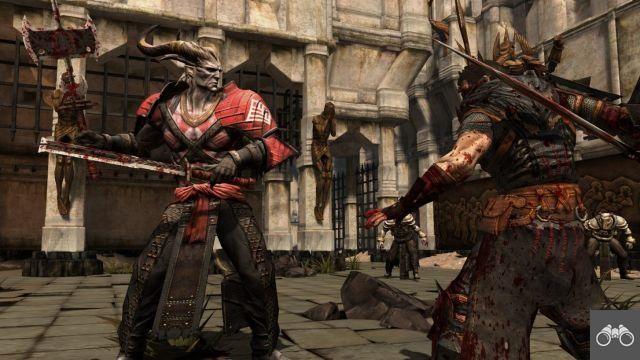 I felt a lack of interconnection between the events of Dragon Age Origins e Dragon Age 2. With the change of campaign location from Ferelden to Free Marches, player actions in Dragon Age Origins end up having little impact on this sequel. The most that can happen when you import your save is to meet some people from the first game and interact with them.

The great differential of Bioware games and something that is very important in all Dragon Age it is the moral choices that dictate the course of the plot. We always have to choose between several possible answers to the most diverse questions. These choices shape and have a huge weight in the course of history. 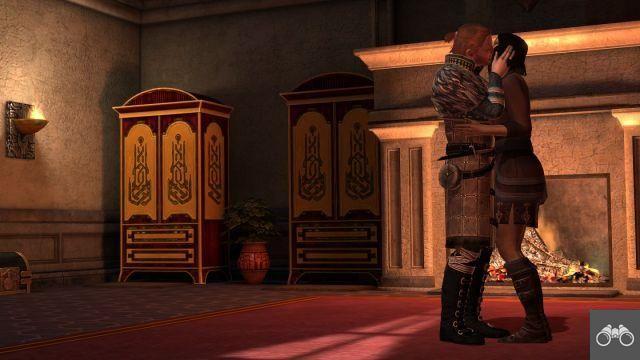 Além disso, Dragon Age 2 innovates with a unique affinity system in the franchise. In it, our companions can become our friends or rivals, and this behavior influences the course of the story and the missions that arise. The characters that surround Hawke see him as a friend, hero, lover and are able to give their lives for him, to protect him and help him in his battles and missions. His rivals will not make much effort to help him, as he has a high level of dislike for the protagonist.

Dragon Age 2 shows a frenetic and extremely fast combat style, sometimes too fast, but it's a full plate for those who enjoy a more dynamic combat.

The game has three classes for the player to choose from:

They all have skill trees that are still very interesting and allow you to customize your combat style. 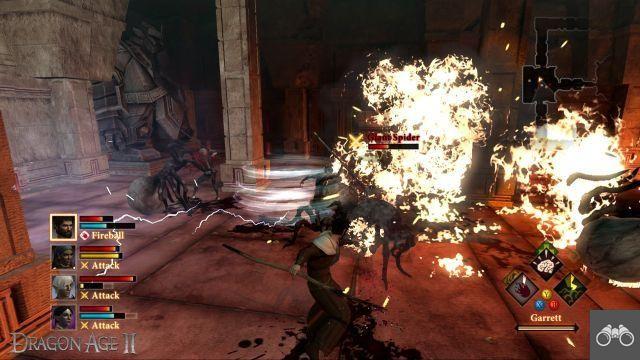 The combat system with companions remains very well developed. We can assemble the team according to the combat style that we most identify with, in addition to using any character from the classes listed above to accompany you on adventures. We set up attack strategies and can compensate for one member's weaknesses with another's strengths. It is worth remembering that these companions can be directly controlled during battles by switching between them, but we can also use the tactics menu and choose which skills will be used and in which situations. The game allows you to leave everything automated, leaving the characters' actions in the hands of the game's artificial intelligence, but the ideal is to leave your team with your way of battle, besides being more efficient is one of the good features of the game.


One point to question is the fact that Bioware has simplified the system for upgrading companions' armor too much. in all Dragon Age, we need to assemble the armor part by part of each of them, already in Dragon Age 2 we only buy upgrades that don't change their appearance at all, just improve their attributes in a predetermined way. At least, they didn't expand that to weapons, attachments, and abilities, which we can still customize manually. 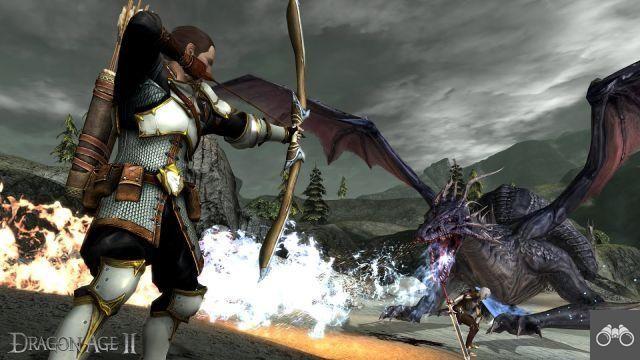 The combat remains fun until the end and the enemies get much more interesting and challenging, with extremely powerful demons appearing and, of course, a Supreme Dragon to make things more hectic, not least because Dragon Age no dragon is not Dragon Age.

One of the big problems of Dragon Age 2 it is the excessive and tiresome repetition of the scenarios. The problem with the reused scenarios is repeated until the end of the game, which hurts the heart even more after seeing the grandeur of the setting of Dragon Age Origins. The scenarios are very detailed and very beautiful, but their excessive repetition is tiring, which showed an excess of laziness on the part of Bioware. Until the end of the game, we will be faced with only one model for each environment (cave, tunnel, mansion, coastal region…), with subtle map differences between them. This way, the same room where you faced the giant spider in act 1 appears in acts 2 and 3, but in a different context.

After a few hours of playing you will get the impression that you will always be doing the same things, as you will enter the same places several times, just changing the objective, and even they may not vary much. The game is very beautiful, that's undeniable, but it lacked diversity. 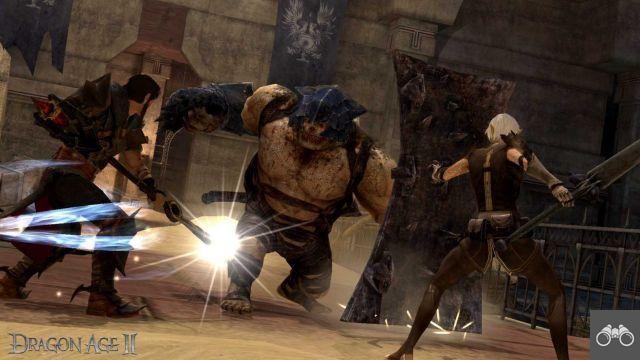 The game suffers from some annoying stutters in its technical performance, some big crashes before entering certain locations, when we are close to an area with enemies or when we are in battle with a lot of enemies and magic on the screen. However, nothing that prevented the completion of any mission.

As this is a special analysis, let's talk about the extra content released for Dragon Age 2.

In this DLC we follow the saga of Sebastian Vael, an archer of noble origin, who seeks revenge against the brutal murder of his family. You have the option to help him satisfy his bloodlust and still get a potential ally. Sebastian is a complete companion, with his own series of side quests.

The missions must be carried out along with the base game and are very interesting, nothing that has an impact on Hawke's story, but they add a good companion, good items and also a smart narrative line involving the Chantry, which is a religious institution in the universe of Dragon Age.

The plot of this DLC explores the family relationships of Hawke's relatives before he was born. Everything is set in a dark and shadowy prison that harbors a powerful evil. We need to surveil and monitor the Dwarven Mercenary faction in the middle of nowhere and discover that Hawke's blood is involved in a macabre ritual that aims to resurrect an intelligent Darkspawn named Corypheus. himself, the villain of Dragon Age Inqusition.

Legacy It has pretty much everything you'd expect in Dragon Age: Dwarves, Gray Wardens, Darkspawn, an ancient evil, and to our delight a whole new environment. The extra content is worth discovering the secrets of Hawke's family, his origins and a little more about the problems surrounding Thedas. Adds very interesting information for fans of Dragon Age.

In this extra content we follow the saga of Rogue Tallis, who seeks Hawke to help her in the search for a jewel that is in a very well guarded castle on top of a mountain in Orlesia. We will be among the nobility of Thedas and we will have to deal with its rules and pompous parties.

Something interesting about this DLC is a new and lethal type of enemy: the Wyvern, a type of giant monster. The game brings a line of very interesting quests not only for hunting this enemy, but for different issues that involve the people of that place. We also have other dark beings to face in Mark of Assassin like Goblins that spew poison.

We received a new skill tree with the arrival of Tallis and a number of good items. The story follows at a good pace and pleases with very interesting characters.

Despite your big problems Dragon Age 2 is a good game, which still leaves you immersed in its universe. the franchise Dragon Age always offers the creation of an epic scale medieval fantasy story where the hero's journey is the player's journey. In this game this scale is smaller, which is somewhat frustrating. It's nice to follow Hawke's saga in the quest to help his family and friends and still find himself in the middle of the conflict between Mages and Templars or a fight against the Qunari, but there was something bigger that united all these ingredients. The division of the story into Acts, where years pass between them, helps to see Hawke's growth, but makes the narrative strange. The endings of each act have sensational endings, but the missions between them could be better developed and connected.

Curious about the world of Thedas and the entire universe of Dragon Age? Check out our special reviews (with all the extra content released for the game) of Dragon Age: Origins e Dragon Age: Inquisition.