Reface app: how to use the app that changes the face?

Author and references
Reface app: how to use the app that changes the face?

Have you ever imagined your face on the body of a singer, player, actor or even a meme? How Refresh App it is possible. The application is simple to use and has infinite mounting possibilities. Fun is guaranteed.

It is important to warn, especially for people who care about the privacy policy in apps: you can be carefree, because according to the developer, personal photos of users are deleted from the company's servers after processing.

In this post, you will know the step by step of how to use the app, learn a little about the technology behind the Reface App and also a brief explanation about Deepfake or Face Swap.

First let's understand how it is possible to put your face on another body so realistically.

What is Face Swap?

Face Swap is the other name given to Deepfake, but both terms serve the same purpose: putting a face on someone else's body. Despite this, the purpose of each of them is a little different from each other. While Face Swap is used for entertainment purposes, Deepfake is more popularly known as a tool to trick people, as will be explained further below.

Now, how does this technology apply in the Reface App? Well, we have no way of knowing. The application developer does not provide details on how the tool works. The company even jokes with users: “How do we do it? If we did, we would have to kill him, but know that the results are absolutely astounding.”

The most that is said by the company is that Artificial Intelligence (AI) maps your chosen selfies and from that makes the facial exchange, even the expressions that are in the videos. In fact, the result is surprising.

Check out the list of what you can do with the Reface App below:

The result is really amazing, however, it is not “so good” when using anime or cartoon media.

How to use Reface App?

Before going to the tutorial, the first step you need to do is download the app, available for Android and IOS. Once that's done, just follow the instructions below. 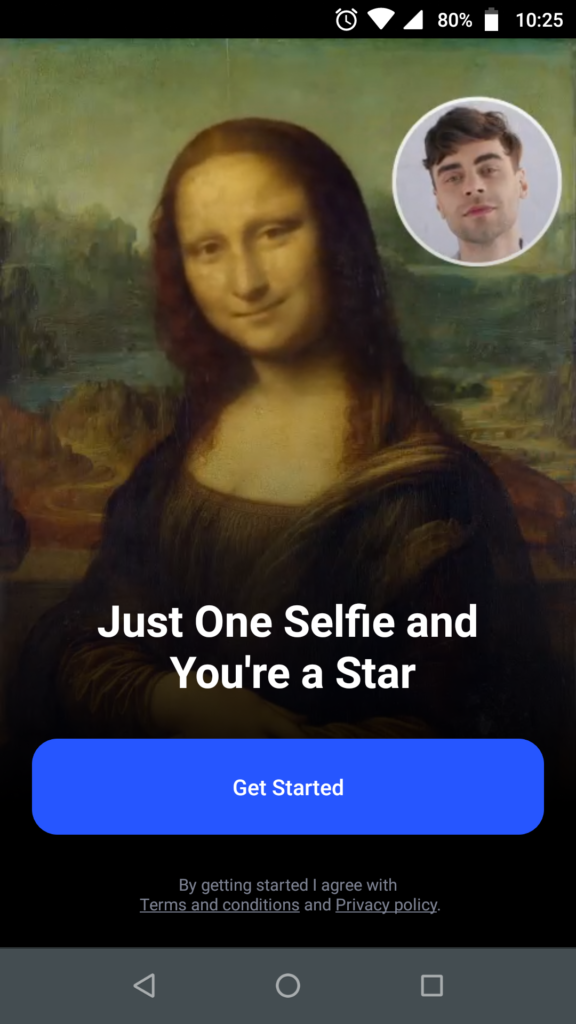 Step 2: On this screen, there are three options. If you choose “Take a Selfie”, you will be directed to your device's camera. Under “Upload from Gallery”, you can choose a photo from your gallery. And if you choose to “Skip”, you will skip this part of using the app right away. 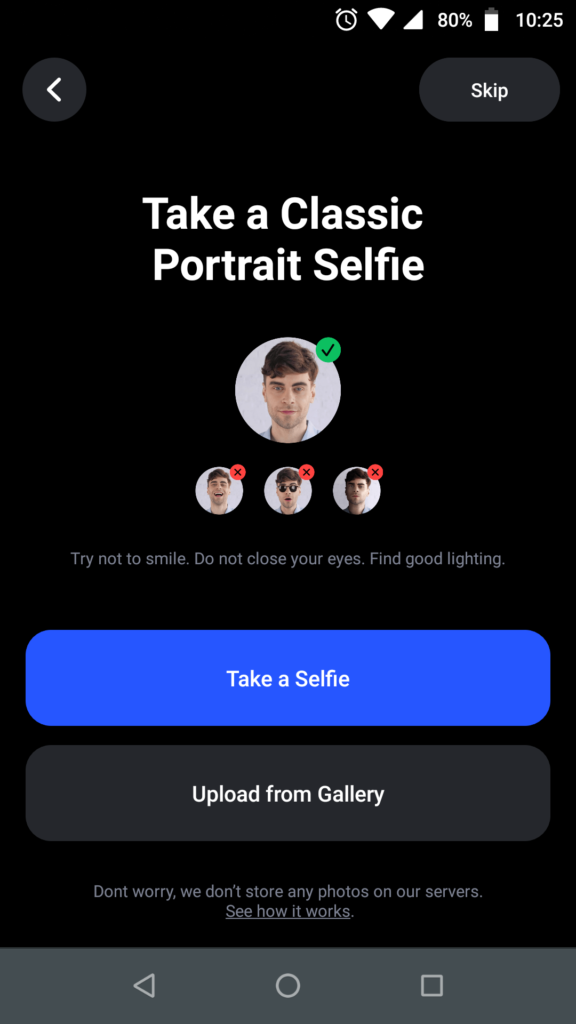 Step 3: The application will ask if you are sure you want to skip the step described above. Tap “Skip”; 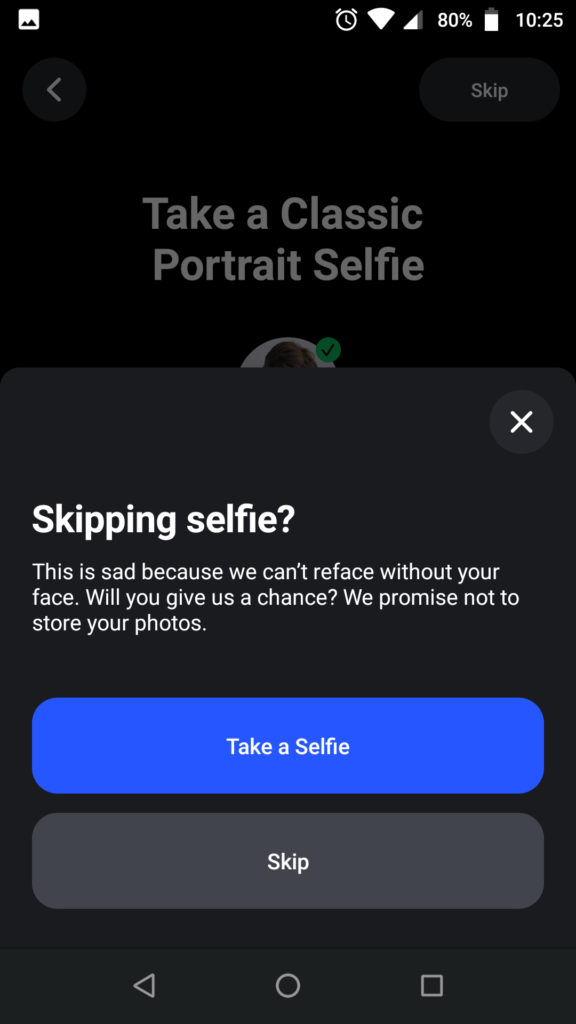 Step 4: You will be directed to buy the app, but just click on the “X” in the upper left corner; 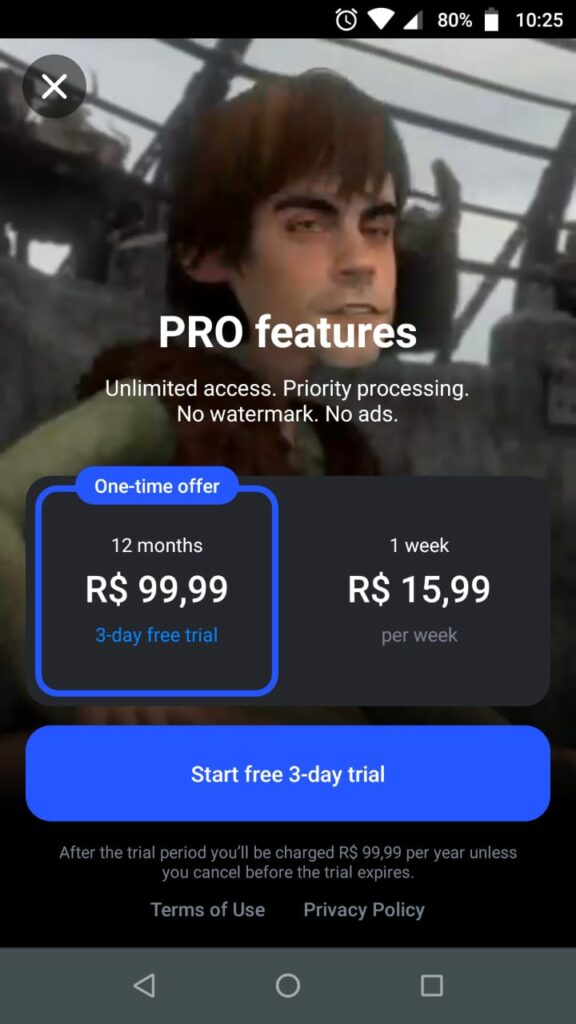 Step 5: You are now on the main screen of the application. Here, you can see the most popular GIFs, photos and videos right now. For this tutorial, we are going to select a medium; 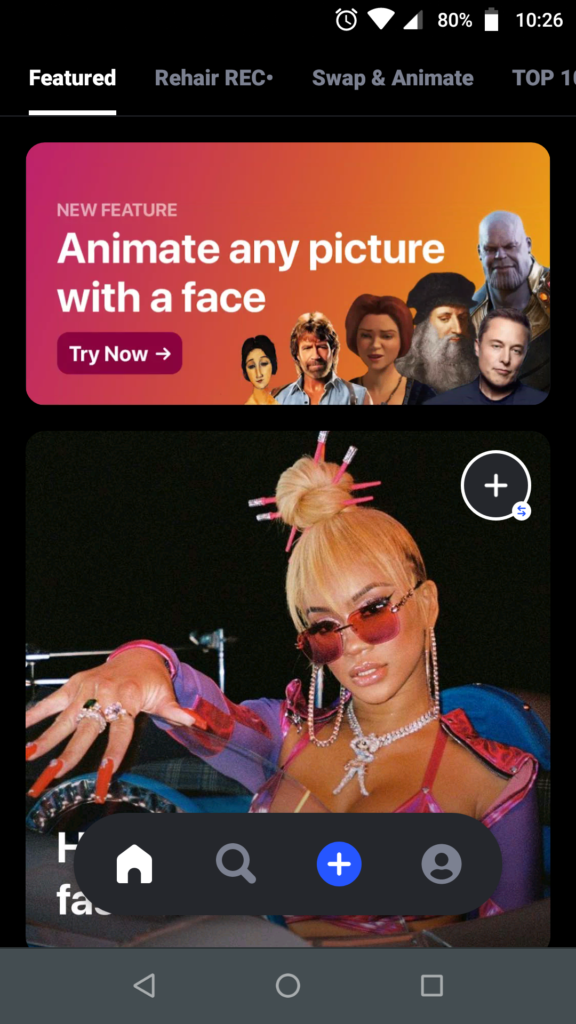 Step 6: Touch the magnifying glass icon and search for an artist you want;

Step 7: For this tutorial, we chose Neymar. In your case, tap on the media that most interested you. 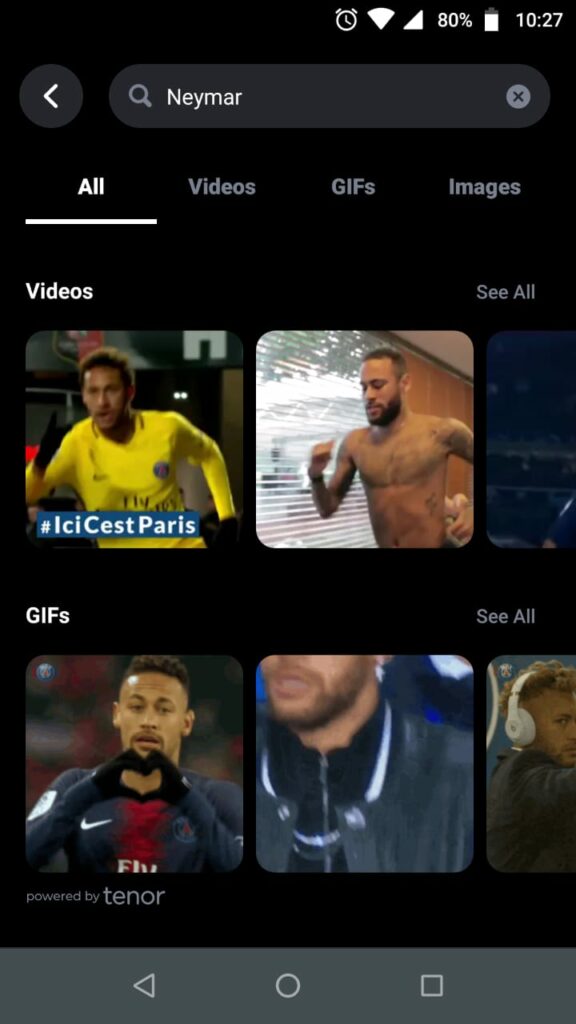 Step 8: If the app detects more than one face in the media you've chosen (which is the case with the GIF selected for the tutorial), you just have to decide which face will be replaced. After that, tap “+ New”; 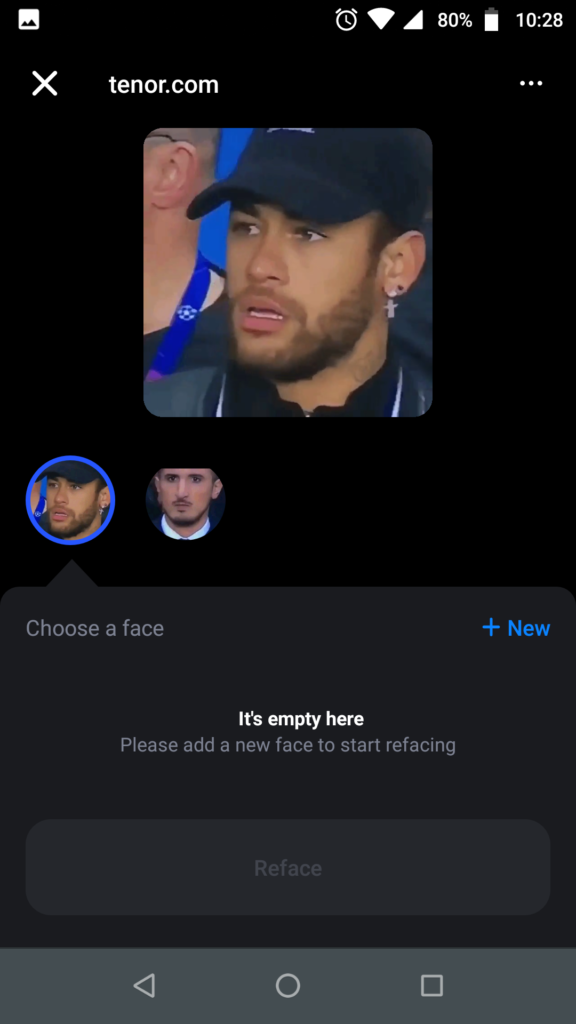 Step 9: Choose to take a selfie or take a photo from the gallery; 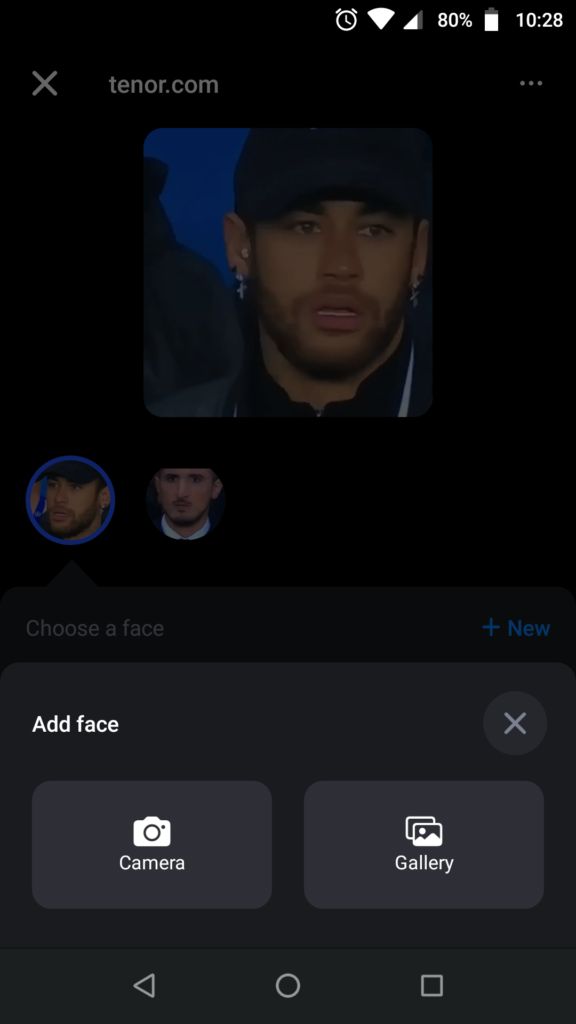 Step 10: After taking the photo or choosing one from the gallery, adjust the size, always focusing on the face. After that, tap on “Confirm”. For this tutorial a Messi selfie was used; 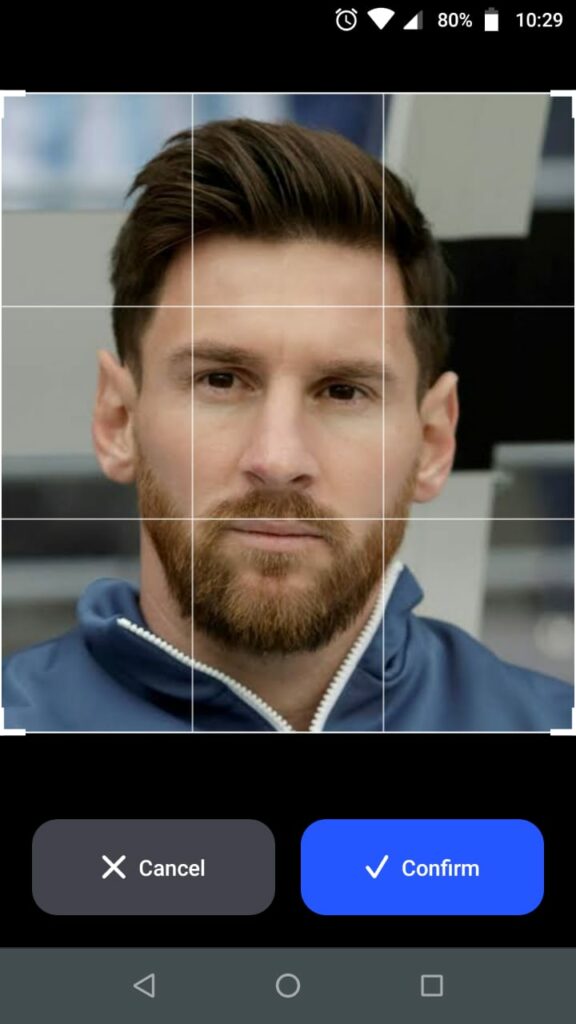 Step 11: You will notice that the chosen media will be ballooned to your photo. To continue, tap on “Reface”; 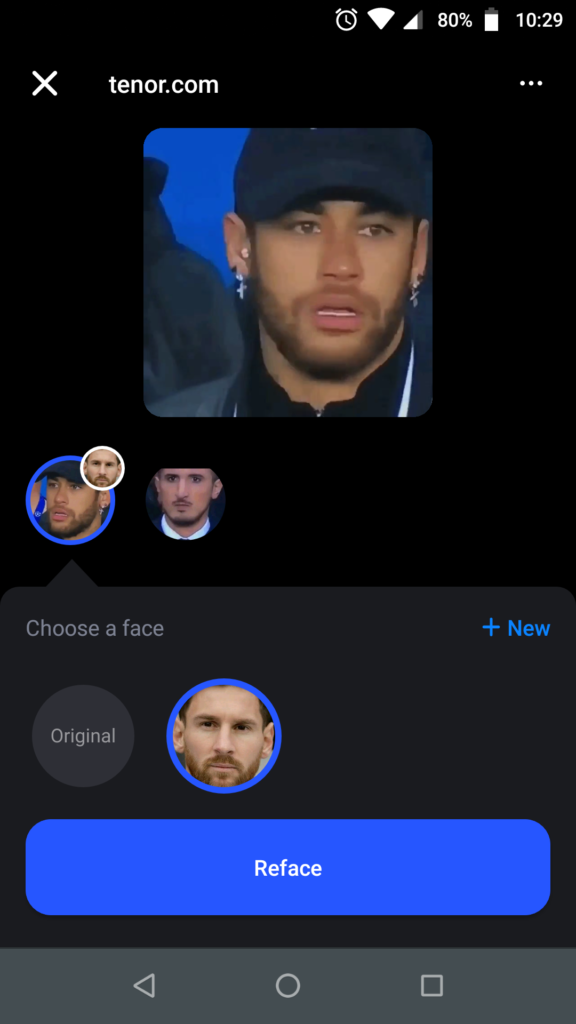 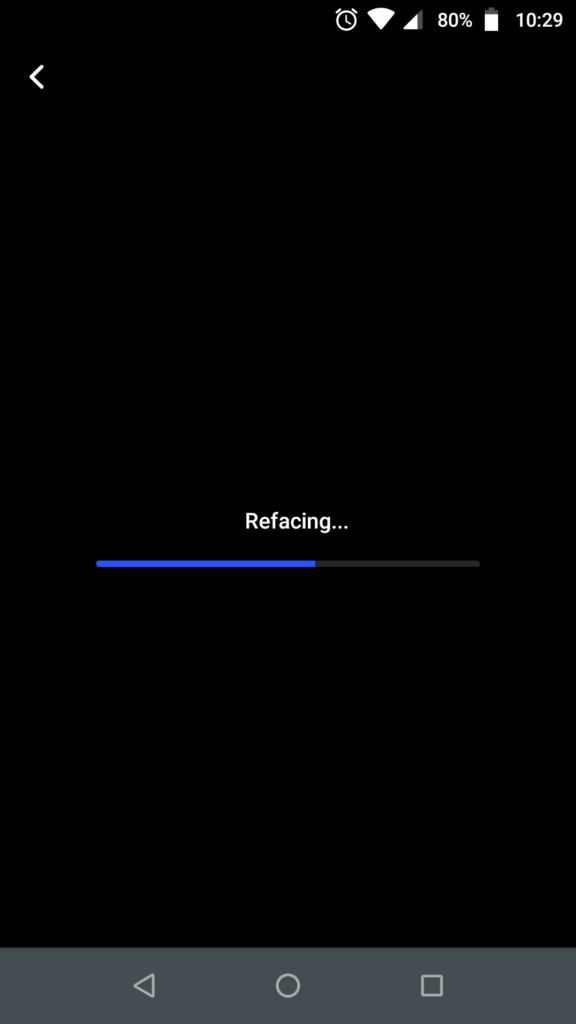 Step 13: Ready! Your editing is finished, now you have “Neymessi”. You can save to your gallery and share on social networks.

It is worth noting that the selfie you chose serves as a “shortcut” for future edits. If you want to use the same photo in other media, just select the face to be replaced. To change the stored photo, just tap the balloon and choose to take a new selfie or take it from your gallery.

During the tutorial process, you may have noticed that the app is free for only three days. If you want to continue using it after this trial, you need to buy the license which costs R$15,99 for a week or R$99,99 for the annual plan.

Reface was developed to entertain people and offer moments of leisure and relaxation. But the technology used in the app can cause some problems. For example, a malicious person who knows how to mess with Deepfake software, can end up making montages from sexual content to fictitious speeches by important politicians.

An example of a deepfake that went viral took place in 2022 and already scared a lot of people at the time due to such realistic editing, was the release of a video with an alleged speech by former US President Barack Obama. In this case, the video was made for a campaign that aimed to reduce the production of this type of false content and alert the effects of false information.

After that incident, Deepfake became a big issue in the tech arena. This topic is still not so much debated in our country, but in the United States this issue is gaining more and more prominence, due to fake videos using deepfake to misrepresent statements by politicians.

In addition to politics, in 2022, the poet Helen Mort had her photos (without any sexual appeal), used on an adult content site. In this case, users edited the images using deepfake with Helen's face with sexually explicit photographs.

In this scenario, some experts point out that these fake photos will become popular with the audience that usually consumes adult content on the internet. The growth can be big enough to become a social media.

Despite these bad and uncomfortable situations, deepfake can be used for good purposes. An example of this happened in 2022, when this technology was used with the face of actor Nicolas Cage to have him “acting” in films like “007 Against the Satanic Dr. No”, “Game of Thrones”, among other works.

In addition to entertainment, maybe deepfake makes internet users research more about a certain subject, not just reading the news headline. Thus, according to a survey carried out in 2022 by the company DNPontocom, it shows that seven out of 10 Brazilians of generation Z read only the title of the news on the portals and do not pay attention to the information in the text. This is bad, because the person can end up falling for fake news, and even worse, they can share. It is worth noting that Generation Z is made up of people born between the late 1990s and 2010s.

In any case, the use of deepfake depends on the context in which the user is using the technology. It will also depend on whether this resource will be used with good or bad intentions. The tool should not be discriminated against, but whoever breaks the law with it.

In addition, the expectation is that this technology will be modified and, over the years, a better option will be delivered to the market. So it's up to us when we choose the context in which we use deepfake.

Deepfake or Face Swap can serve as tools for many technology projects and result in benefits in many ways. Anyway, have a lot of fun and have a good laugh with your friends using the Reface App, like Kratos, with Messi's face.

Round 6 Netflix: 24 facts about the series that is grooving ❯

add a comment of Reface app: how to use the app that changes the face?