Pix Group: what it is and how it works

Author and references
Pix Group: what it is and how it works

Since its launch, Pix has been an essential tool in the lives of our countrymen, facilitating the flow of money and even affecting the country's economy. But you know the concept of Pix Group? If not, we'll explain later in this post, but first you'd better know a little more about what Pix is.

This is a completely free, fast and practical instant payment system developed by the Central Bank.

However, as with pretty much everything, criminals saw an opportunity and learned how to use this tool to their advantage, especially by running online scams and profiting from them.

The R$1 Pix Group has been one of the main, if not the main scam applied by these crooks on the internet. Check out below what the Pix Group is and how it works:

Learn More: Scheduled Pix: how to use it to make payments?

What is the Pix Group?

It is worth mentioning, first of all, that there is not just one R$1 Pix Group, but several. The common point is that they all have basically the same premise and operation.

For starters, a person (the scammer) creates a group for no reason on social messaging networks, which can be via WhatsApp or Telegram, for example, and sets some basic rules. From there, it attracts more people to join by offering a chance to earn easy money.

But how will this Pix Group generate the much-promised money for participants?

Before understanding how this scam works, you first need to know what financial pyramids are. This is a flawed business model that sustains itself through the arrival of other people who are referred by old members. That is, a person will only have the financial return if they invite others to participate in the coup.

However, this is where the failure of this type of business begins. At a certain point, the number of participants becomes so large that the scheme does not sustain itself and “crashes”, causing practically all the participants of the financial pyramid scheme to lose.

Meanwhile, a small minority, usually those who started the scheme, walk away with virtually all of the profit.

Whenever a new member of the scheme joins the group, it is necessary to send a Pix of R$1 to the moderator who added him to the scheme. That way, you will earn money by calling people. A part of these values, depending, may go to who created the group.

When the person joins the group, he also becomes a moderator and starts to charge R$1 whenever he adds someone to the group, since he also has this power.


It is worth mentioning that groups in these messaging apps have a maximum value of only 256 people per group. That is, one hour the scheme will start to fail in a matter of time.

What's worse is that people can't know when the group limit will reach before sending the money.

Furthermore, if a person is in financial trouble, it makes an offer seem acceptable.

Learn More: How to transfer via Pix PagSeguro?

What to do if you fall into the financial pyramid?

This type of scheme is considered a crime against national security and those who create the financial pyramid can receive a fine and even jail punishment, according to Law 1.521 of 1951.

So, if by any chance you are caught in the R$1 Pix Group, go directly to the police or any law enforcement authority. With that, they can go after those responsible before the scheme spreads further.

Learn More: How to transfer through Pix Itaú?

What does WhatsApp say?

WhatsApp is one of the biggest social networks for exchanging messages, so Grupo de Pix happens mainly on this platform.


The company does not allow them to use the platform as a means to make a profit or other unauthorized ways to make a lot of money. Practicing and preventing this type of unlawful conduct, violating third party rights and causing real harm goes against WhatsApp Policy and Terms of Service.

If someone does not respect this, they may have their account in the app suspended and even deleted. So always be suspicious and report it.

The messaging platform also encourages users to report inappropriate activities and contacts that may occur in chats. 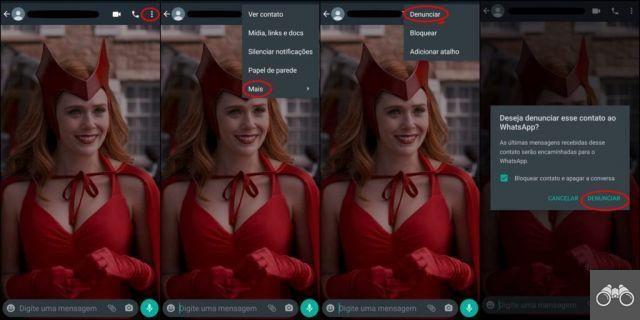 If you come across the Pix Group, follow the steps described below to find out how to report the contact who invited you:

Step 1. Open the conversation of the contact you want to report;

Step 2. Click on the three dots located in the upper right corner of the conversation and click on “More”;

Step 3. Go to the “Report” option and select the message box that will appear written “Block contact and delete messages from this conversation”;

Step 4. Finally, click on “Report” again. With this, your complaint will be made and registered.

Learn More: How to transfer via Pix Caixa?

Audio Video Pix Group: what it is and how it works
Hashtag: 10 basic tags for you to use better ❯

add a comment of Pix Group: what it is and how it works