Author and references
Netflix action movie: The 20 best to watch

Today's tip is for you who are a fan of a good adrenaline, check out the list of Netflix action movie that we've put together with the top 20 movies of the genre, available on the world's largest streaming.

Action can mix with many other genres like natural disasters, science fiction action, comedy and even horror.

Action and adventure movies are a good choice even to watch as a family, they involve us and make us feel a lot of emotions, in addition to being able to hold our attention from start to finish.

Prepare the popcorn and the heart to handle the emotion in the Netflix movies that we have separated for you:

1. Rise of the Black Swan

We've already started with a film that, as of this writing, is at number one in the top 10 of the week: Rise of the Black Swan.

The film promises a lot of adrenaline, shooting and suspense.

Mercenary Grace Lewis (Ruby Rose) seeks revenge. She and her family command a group of mercenaries, called "black cines", who are hired to destroy a village that was hampering the construction of a gas pipeline in Georgia.

After images of this action end up on the internet, the government sends the SAS on an official mission to apprehend the criminals, but with the intention of eliminating them once and for all.


Grace manages to escape and soon begins a train hijacking, which is the main plot point.

But she didn't count on the soldier and member of the aristocracy, Tom Buckingham, being on the train, he was traveling with his girlfriend to Paris.

Faced with the threats, Tom finds himself obliged to stop the criminals. Check out the trailer:

Despite mixing science fiction, Blade Runner is not far behind in terms of action.

The plot follows the life of K, a human created by bioengineering, who works with the LAPD as a Blade Runner (Android Hunter) and will face a situation that will mess with him.

He discovers an unimaginable secret and is given a special mission that may be linked to the disappearance of Rick Deckard, the former Blade Runner missing 30 years ago.

The film has an engaging and very surprising plot, with a hint of police investigation and dark secrets that make us want to watch until the end.

A great original production on the platform, with a strong cast.

The film has Jason Momoa (AquaMan) as the protagonist. He plays Ray Cooper, a boxing teacher who finds himself seeking revenge.

His goal is to get justice against a pharmaceutical company that was responsible for taking a drug out of circulation and that could have saved the life of Ray's wife, who died of cancer.

But Ray's actions put the safety of his daughter Rachel (Isabela Merced) at risk.

Now, in addition to seeking justice, he will also have to strive to keep his most precious possessions safe.

Despite having been released a few years ago in cinema, No Pardon could not fail to gain prominence on our list.

The plot involves revenge, seduction and a lot, but a lot of revenge!

Beatrice was the victim of a car accident and comes across Victor, the right-hand man of one of New York's biggest criminals.

She then sees her chance to seek revenge for what they put her through.

Beatrice blackmails Victor with a video of him murdering a man.

In partnership, they come up with a plan to attack Victor's boss, the gangster responsible for the death of his wife and daughter, which occurred a few years ago.

In yet another Netflix original production, the plot involves action and fiction.

Nadja and her son Elias embark on a trip to New York, where she will seek treatment for an “illness” she has had since losing her husband.

In the middle of the flight, a terrorist group announces a hijacking of the plane. In order to protect her son and try to save the other passengers, Nadja will have to make a difficult choice and expose a secret she has hidden for a long time.

At one point, the kidnappers end up shooting Nadja and they think she really died.

But to everyone's surprise, Nadja returns and is very angry. She will do anything to keep her son safe.

One of the biggest and best netflix movies, Rescue is full of “shot, ** and bomb”!

The film has a completely engaging plot and a great cast, where Chris Hemsworth is the protagonist.

Tyler Rake is a special agent who is sent to Bangladesh on a mission to rescue the son of an Indian criminal, who has been kidnapped by drug dealers from the neighboring country.

Tyler has to deal with constant identity crises with his emotionally vulnerable.

He forms a connection with the boy as they do everything they can to evade the criminals.

It's a plot with great action sequences and that doesn't leave a minute to be desired.

A typical police plot, in Double Target, after having his partners murdered, hitman Jimmy Bobo (Sylvester Stallone) teams up with Detective Taylor Kwon (Sun Kang) in New York, to find the person responsible for the deaths and get revenge.

The production, starring Jamie Fox, Joseph Gordon Levitt and Dominique Fishback, tells the story of a police officer who joins forces with an army veteran and a drug dealer.

All this in an attempt to fight criminals, who use a pill capable of giving users random superpowers for 5 minutes.

This remake of the 1972 classic is about drug lord Youngblood Priest, who started dealing at the age of 11 and became one of Atlanta's biggest criminals.

He lives a life of luxury at the expense of money originating from illegal means.

With so much money and influence, he's got powerful allies and relationships, but there are dangers that money can't stop.

His life and the lives of the people he loves are threatened by a new gang.

Jessica Chastain plays Ava, a secret assassin who works for an organization.

Its targets are high-class members and politicians who have done something wrong.

She always seeks to know why her targets deserve death.

After a mission goes wrong, Ava must fight the very organization that hired her to protect herself and her family.

11. Colombian: In Search of Vengeance

Cataleya Restrepo (Zoe Saldana) saw her parents' death up close when she was just a 9-year-old.

As time passed, Cataleya began working for her uncle and became a professional assassin.

In order to get revenge for her parents' deaths, she will finally go after the mobsters responsible for the crime, even if it means putting everything she's gained to lose.

We can even say that there are some similarities with the famous movie Tomb Raider, inspired by the games that have Lara Croft as the main character.

Another great Netflix production, the film tells the story of a gang of mercenaries led by Andy (Charlize Theron) who became immortal.

They participate in clashes on behalf of humanity always in secret.

But as they go on a mission to Morocco, the group falls into a trap and their secrets are exposed.

In order to prevent his partners from getting caught too, Andy teams up with Nile to stop them from becoming lab rats for a pharmaceutical organization.

A billionaire played by Ryan Reynolds is declared dead and takes advantage of this situation.

He creates a group to fake his own death and fight crime in hopes of changing the world.

Ignoring rules, treaties and bureaucracy, all that matters is to act.

Members are identified by numbers, so that no one knows anyone's name and runs the risk of creating some affection.

Everyone has a role on the team.

Who doesn't like a good fight? In the movie Breaking Rules, it's not missing!

The plot revolves around Jake Tyler (Sean Faris) a young man with a somewhat aggressive behavior and who spreads a reputation as a troublemaker wherever he goes.

The trauma of losing her father contributes to her temper. When he moves to Orlando, he arrives at the new school with the label of a bully and soon finds an opponent, who is also not easy to deal with, the popular Ryan McCarthy (Cam Gigandet).

Ryan teases Jake and puts his own girlfriend in the middle, leading to a fighting duel.

After that, Jake wants a rematch and decides to train his skills with the master Jean Roqua (Djimon Hounsou) who will play a very important role in his life, not only in the fight.

Police officer John Cale (Channing Tatum) wants to be a member of the President of the United States' security team, but he fails a selection.

After that, at a time when John was taking his daughter to see the White House, a terrorist attack begins and John has to protect his daughter and save the president's life.

To destroy the villain, Xander gathers the best soldiers on Earth and has to face resistance from corrupt governments around the world.

Triple X is a remake of the franchise that Vin Diesel helped launch in 2002 but which lost its success for lack of a sequel.

The Polish film, which has just arrived in the Netflix movie catalogue, tells the story of an MMA fighter seeking revenge for the death of his brother, while at the same time trying to deal with his personal problems.

Secret Service agent Vic Davis is traumatized by the loss of his partner during a mission.

When he goes to pick up his son from college, he is faced with an attempted kidnapping against the daughter of the US Supreme Court judge. 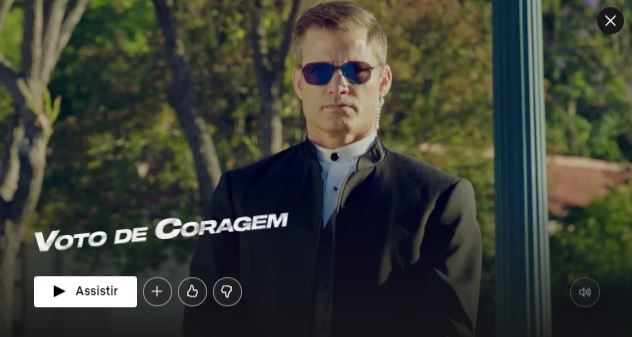 Talented thief Parker (Jason Statham) is betrayed by the people in his group and is nearly killed.

What no one knows is that he survived and will return with a vengeance for the bad guys who tried on his life.

Parker is aware of a planned robbery in Florida. So he poses as a rich man looking for a property, and in that he meets the realtor Leslie (Jennifer Lopez), who goes through financial problems and ends up getting involved in Parker's plans.

To close with a flourish, we brought a film with pure adrenaline. Cain Burgess (Scott Adkins) is a crook, who was betrayed by his loan shark brother.

Upon receiving a temporary release from prison, Cain decides to take revenge on the people who made him become a cold-blooded killer.

There are many action movie options to choose from, from the most realistic to the one with more special effects or even involving genetically modified humans.

Enjoy our Netflix action movie tips and share with your friends.

Do you have any pointers too? Leave it in the comments.

Learn More: The 20 best series of our country on Netflix

add a comment of Netflix action movie: The 20 best to watch