Author and references
How to pin comments on Instagram

Instagram now allows users to pin relevant comments to their posts. The launch of the feature, which was in the testing phase, was announced on the social network's Twitter.

With the new functionality, users will be able to pin up to 3 comments to stand above the rest. The idea is that profiles can highlight positive and relevant comments for publications.

That means you can a pin a few comments to the top of your feed post and better manage the conversation. pic.twitter.com/iPCMJVLxMh

The process to pin comments to the top of your Instagram posts is simple and quick. Look: 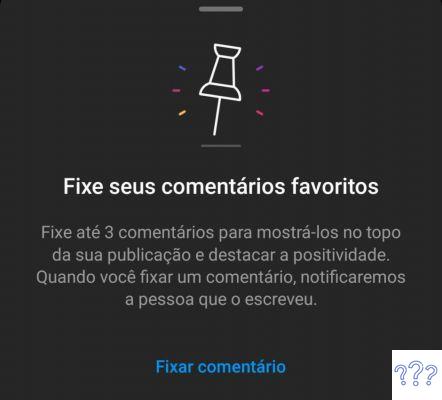 Ready. The comment will now appear at the top of the thread, marked with the pin symbol.

To remove a pinned comment, just hold your finger on it and select the pin again. Then, in the window that will open, select unpin. By doing this, it will leave the top of the topic and will reappear among the others just below.

You can keep up to 3 pinned comments on each post, unlike broadcasts, where you can pin only one.

Important: whenever you pin a comment, the person who wrote it will be notified via an Instagram notification.


Both business and personal accounts can use the feature. However, you can only pin third-party comments. There is no way to leave your own comments at the top of the post.

Learn more: How to create videos with Reels on Instagram

Despite not being one of the most awaited features of the platform, the possibility of pinning comments has always been widely used in live broadcasts, where it was already released. Now, this role should help creators and brands to highlight especially positive reviews. This can also be a way to give more prominence to partner companies in the business.

The release of the feature has now been confirmed globally. However, like every new thing that comes to Instagram, the function can take a while to appear on all accounts.

Audio Video How to pin comments on Instagram
How does Santander Credit Aymoré work? ❯