During the last weekend, I ventured a little in the proposal of Grounded, the new project from Obsidian. It's a first-person, co-op survival game for up to four players, where players are reduced to the size of an ant and tasked with surviving in the unique micro-world of a suburban backyard.

I confess that my interest in the game was very small, because after my intense experience with ARK: Survival Evolved, I wanted a game distance with survival mechanics, but I decided to know a little about Grounded to understand the studio's idea of ​​venturing into such a different genre for them, as they are best known for creating robust RPGs like The Outer Worlds, Pillars of Eternity and Fallout New Vegas, for example.

Grounded it was already in development before Microsoft's acquisition of Obsidian, and now the developers explain that they have the resources to make it a reality, even though it's being created by a small team at the studio. Even if it is a smaller project, will it be Grounded has the potential to establish itself as a new franchise from Obsidian and Microsoft?

The Demo, released to Xbox Insider users, consisted of a brief presentation of how the player will be able to venture alone in the world of Grounded, because as said above, it can be enjoyed in groups of up to four players, but also solo. So, before releasing the game's multiplayer next month, the developers only released a singleplayer journey, so that players get to know the basic mechanics and also a little bit of the world that the studio wants to present.

There was a vast backyard to explore, full of places to discover and mysteries to unravel, all with the same central objective, which is to investigate as much as possible to try to find out why you appeared tiny inside your backyard. The atmosphere of mystery and discovery that the game presents is very pleasant, and you quickly find yourself curious to discover a little more of it all there. 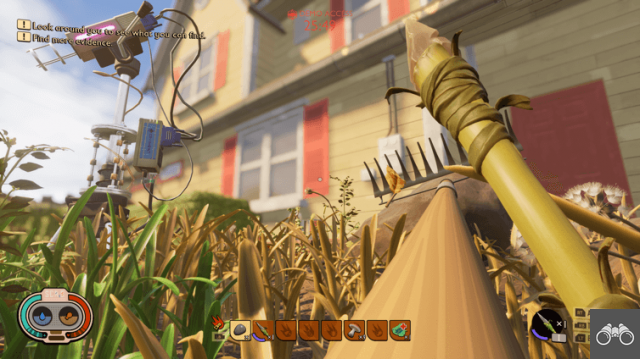 Virtually nothing of the story, other than what I've mentioned above, was revealed during the Demo, the focus was clearly on giving a little taste of what's to come, but without revealing too much. Obsidian has already assured that, despite the great focus on survival and cooperation between friends, they are building something that gives strong reasons for the player to remain motivated to discover everything until the end. The studio is great at telling good stories, so the potential is really there.

Each journey through the Demo had a total time of 30 minutes, which could be repeated with your character starting from scratch, which also limited what you could do in each session. The idea is that with each new start you could try new things instead of just becoming almighty over the weekend.

The central idea is to go looking for resources around the environment to set up your base and also create weapons, equipment and items that help you explore the backyard, mainly to be able to defend yourself from the most diverse threats that exist across the vast map. These items have durability, which brings more complexity to the gameplay. Facing these enemies is extremely important to optimize your progression, as many of their parts are valuable materials for crafting armor and other important items. The more powerful it is, the stronger the item created. 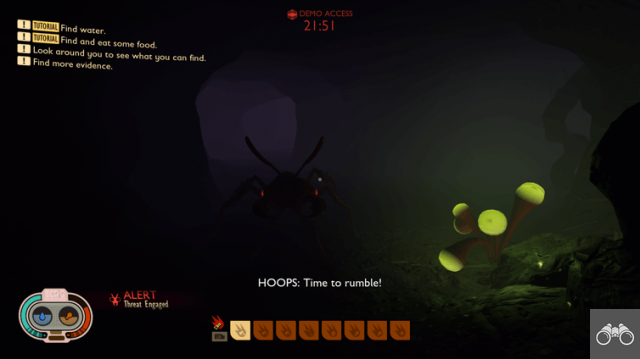 These action moments are tense, because the insects are really scary, whether they are the brutal spiders and ants, or the mosquitoes and other animals. Many of them don't think twice before attacking you. It's really agonizing to have a giant spider chasing you, and sometimes it's best to just run and hope you make it out alive. Both the design of these animals, as well as their animations and noises, are extremely well done, which increases the anguish of finding and facing them.


Precisely thinking about those who may have a greater discomfort when encountering these spiders, which are even too realistic, Obsidian has placed, in its accessibility options, a filter for phobias such as the infamous arachnophobia, which is the fear of spiders. You can configure them so that they have a look that makes you more comfortable to play Grounded no problems. 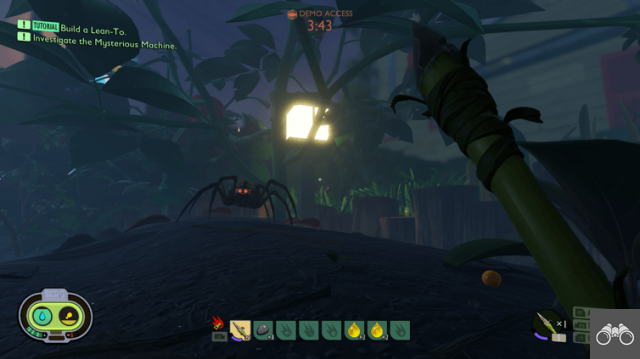 As it is a survival game, in Grounded you will also have to manage your hunger and thirst. Drink water from the bubbles that form on plants or find a way to purify dirty water. Feeding on mushrooms or the flesh of the insects themselves. There's a lot to worry about during your adventure.

The controls are pretty intuitive and work well, just the combat that I found a little clunky in some battles, but it's something that can be refined during early access.

As for the game's map, it is open and very wide, with many places to explore and discover. As I wandered aimlessly around the yard, I found ant holes, items left by humans of normal size, such as cans and toys, for example, various plants, various structures that already existed in the yard and others made by insects. Exploration is very good, as you always end up discovering something new, which keeps you immersed in the gameplay at all times. It seemed to me that the game will also have metroidvania mechanics since some areas I couldn't access, but it was clear that it will be possible with some kind of equipment that I hadn't received or built yet.

The ambiance of Grounded impressed me a lot, because initially the game didn't seem so interesting graphically, but when you're inside it you can absorb a whole unique atmosphere, which is really well built. Even with a cartoonish and colorful style, it also has its darker sides, which gain strength when we enter caves and holes, or even when night comes. Yes, there is a constant cycle of day and night, which makes everything even more dynamic and strategic, as you need to choose the right time to explore. It's terrifying to be in the dark and see the red eyes of a giant spider come your way, so maybe it's best to take the night off for other activities.

The backyard is really interesting to explore, and it's inspiring to see the love that Obsidian has put into every corner of this map, as they've managed to transform what would be a simple setting into something grand and unique. There's still a lot of polishing and optimizations to be done, but because it's a very early build, the potential is really huge. Elements such as the good use of the color palette, lighting, shadows and performance are very well developed. 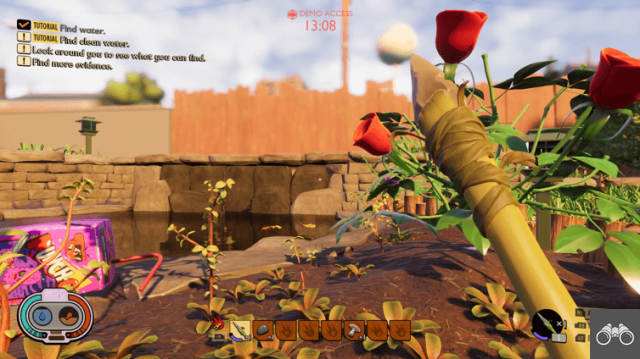 The soundtrack is good and dynamic, with quiet moments during exploration, but with drastic changes to give more tension to the action of a combat, and it's a feature that works very well.

I went to play the demo without expecting much and was pleasantly surprised. Grounded is a simple game, but that brings a fun complexity in the way we have to organize our progression, both to strengthen ourselves for the dangers that we can find, and for the unexpected that awaits us in each new area discovered. And don't be fooled, because despite the more casual appearance, it has great potential to also please an audience more engaged in survival games, as it has depth for it.

The extremely unique world created by Obsidian can be the catalyst for a great success, as it is truly addictive to explore the backyard and find out more about what is there. The mechanics work well and are well targeted, and can be optimized to the fullest during early access starting next month. If the title has a support like Sea of ​​Thieves, for example, the Xbox Game Studios may have a promising franchise on hand.

Grounded starts its early access next month (Learn how to join), where it will be created together with the players of Xbox Game Preview, which will also accept Xbox Game Pass Ultimate players, as well as through the Steam base. A good community to start building the future of the title, which has more potential to stand out among survival games than I imagined.