Demon's Souls Remake: Release Date, History, Pre-Orders, and Everything Else We Know 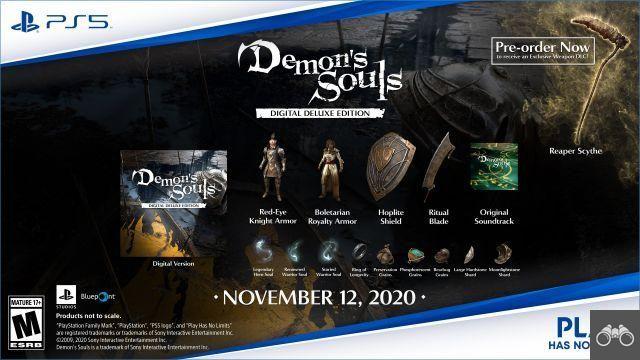 Since its release in 2009, Demon's Souls has had a huge impact on the gaming industry. While it's overshadowed by its successor, Dark Souls, and the huge influence the game and its sequels have had on developers around the world, much of what made Dark Souls so interesting was first explored and made possible by Demon's Souls. In November, players who missed Demon's Souls when it launched for PlayStation 3 will have another chance to try it out, with a full remake of the game among launch titles for Sony's next-gen console.

That means the new Demon's Souls is fast approaching, so it's time to tell you everything we've learned about one of PlayStation 5's biggest launch titles. Here's what you need to know about the return of the seminal entry in the Soulsborne genre.

Demon's Souls is being released alongside the PlayStation 5, which means it will launch on November 12, when the console launches. At the moment, that's the only platform we can expect Demon's Souls on - although there was a brief moment when it looked like we could have Demon's Souls on PC as well. The trailer revealed during a recent PS5 game showcase listed the game for PS5 and PC, but Sony has corrected the record. That could mean a PC version is coming sometime in the future, but on November 12, you'll need a PS5 to play the remake.

What exactly is Demon's Souls?

Even if you're familiar with Dark Souls and the games that came after, you might have missed the bus on Demon's Souls and wondered what it's all about – and why you should care.

Demon's Souls is the prototype of the Souls game, so it carries a lot of the hallmarks of the formula that went on to define From Software's titles for years to come. You play a lone warrior venturing into a dark fantasy land overrun by monsters and demons, where your goal is to kill enemies to win the souls they carry. These souls can be spent on leveling up your character by adjusting your stats, which can change the game by letting you use different weapons, speeding up your actions, or giving you access to magic. If you die, however, you'll lose the souls you've gained but not spent, so planning and strategizing, playing carefully, and managing risk are key to the experience.

Most of how you play the game is dictated by a stamina meter that determines how far you can run, swing your sword, or block blows. In combat, Demon's Souls is mostly about managing your stamina and time meter, making sure to block certain attacks, dodge others, and attack when you have an opening - without overcommitting and opening yourself up. Like the other Souls games, part of the fun of Demon's Souls is its difficulty - it's a world where enemies can take you down with just one or two hits, requiring you to be vigilant and careful if you want to succeed.

Demon's Souls is set in the cursed land of Boletaria, where the king made use of an ancient power called Soul Arts and, in doing so, awakened a demon from the dawn of time called the Old One. As a result, the demon covered Boletaria with a dense fog that released all kinds of monsters. These monsters want human souls, and they hunted down the people of Boletaria, freeing their souls to feed on them - and letting the soulless ones descend into madness and prey on anyone who survived.

Your job as a lone warrior venturing into Boletaria is to free it from the Ancient's curse once and for all, but it won't be easy. As with Dark Souls, you must be prepared to die.

Like most other Souls games, Demon's Souls also has a multiplayer component. It lets you summon other players to help you fight the monsters and bosses you face, or invade other players' worlds to add to their troubles (and they can invade yours too). While you'll need a PlayStation Plus membership to access Demon's Souls multiplayer, you'll still be able to see notes that other players leave to warn or deceive you about incoming threats.

It is a remake by Bluepoint Games

Like Dark Souls, Demon's Souls was originally developed by From Software, who went on to create a bunch of titles using parts of the formula, including Bloodborne and Sekiro: Shadows Die Twice. The remake retains the entire design of the original, with updated visuals and audio.

However, the developer behind the remake is Bluepoint Games, who were responsible for the gorgeous PS4 remake of Team ICO's Shadow of the Colossus, a game originally released for PlayStation 2. This remake has kept everything from the original, with updated graphics and additional touches like a photo mode. We can likely expect the same treatment here: classic Demon's Souls gameplay, but with a much more impressive and modern presentation.

The original was phenomenal

Demon's Souls might be the least known Souls title, but among those who have played it, it's extremely well regarded. AllMyVidegames gave the original Demon's Souls a 9 when we reviewed it, and named it Game of the Year for 2009. As AllMyVidegames critic Kevin VanOrd put it 11 years ago: “Perhaps the game's greatest triumph, however, is that it takes usually associated with frustration and discomfort – constant trial and error, slow progression, severe enemies – and makes them virtues. It may have an unusual and unforgiving set of rules, but it stays true to them and, in the process, draws you in as few RPGs can. Demon's Souls is a stiff, feisty beauty and is one of the best games of 2009.”

So if you're wondering why you should care about the Demon's Souls remake in 2022, its past performance, coupled with the massive impact of Souls titles on the gaming landscape in the years to come, are good reasons.

Our first look at the remade Demon's Souls came with the PS5 announcement event. You can check out the trailer below.

Later, when Sony showed off a bunch of upcoming PS5 games during their demo event, we got a closer look at Demon's Souls.

What does the remake involve?

On its official game page, Sony reported what you can expect from the improvements in Demon's Souls when you plug it into your next-gen console. It will have two graphics modes: a high resolution 4K mode and a high frame rate mode. We're not sure what frame rate to expect in any mode yet, though.

The PS5 features some technological advancements over the PS4 and PS3 that are also being worked on in Demon's Souls. If you have headphones that support it, you can take advantage of the Tempest 3D AudioTech consoles, which should make the sound of Demon's Souls even more immersive. Another big boost for the console is the haptic feedback built into the new DualSense controller, although we don't know exactly how that will amplify Demon's Souls just yet.

There are two versions of Demon's Souls that will be available on launch day. The first is the normal standard edition which only offers the base game for $70. There is also a second version called the Demon's Souls Digital Deluxe edition which comes with some additional in-game items. That version will cost $90.

Items in the Demon's Souls Digital Deluxe edition seem to make it a little easier to survive the game's opening hours. You'll have some armor, weapons, and items to use, as well as the original Demon's Souls soundtrack. Here is the full list of in-game items:

The $70 price tag for the standard version of Demon's Souls is a noticeable change from the regular price for AAA games. For over a decade, games have cost $60, but most games coming to the PS5 will cost $10 more. This seems to be a growing trend among all next-gen games, in fact. Here's everything you need to know about pre-ordering Demon's Souls.

Compared to the PS3 version

The PS3's Demon's Souls update is pretty substantial, as you can imagine, but it's hard to really imagine until you see the two games stacked against each other. To be clear, AllMyVidegames created a video that shows the two side by side. Check it out below.

There may be something called “fractured mode”

We don't know much about the new features Demon's Souls might include, but we do know that there might be some new things added to the remake that aren't present in the original. Like the PC version mentioned but deleted, an early description of the Demon's Souls remake mentioned something called "Fractured Mode", but there were no clues as to what it really was. Subsequent descriptions of the game, including the official PlayStation store pre-order page, don't mention Fractured mode, so who knows what it is - or if it will actually be part of the Demon's Souls remake.

That said, there is some speculation about what the Fractured Mode might be if it appears in the remake. Mods for the original Demon's Souls randomize the placement of enemies, items, weapons and more in order to create a fresh experience - and including something similar in the remake would make sense to make the game appealing to hardcore veterans. But there's still no real information about Fractured Mode, and it's quite possible that it was never a feature in the game. We'll have to wait until November 12 to find out.

Learn how to change the message font and WhatsApp Status ❯

add a comment of Demon's Souls Remake: Release Date, History, Pre-Orders, and Everything Else We Know