Admit it! Just reading this question makes you nostalgic if you were one of those who used the UOL chat.

Yes, cool, not current term, but worth using in this content, because this post brings a nostalgic theme.

In this post, remember the main functions of the UOL chat.

And for those of you who didn't use UOL chat at the height of the platform's popularity, learn how it was the main way to communicate with other people on the internet at the time when messaging apps were not so popular.

Also, see how this tool is today.

Chat UOL appeared in 1997, shortly after the internet was made available for commercialization among the population.

And since this post is pure nostalgia, it is worth remembering the noise it made when connecting to the dial-up network.

It was slow, very slow, but somehow fun. It was only a problem to use the internet at night, as it woke up the whole house.

And long before social networks were popular, UOL Chat was revolutionary in its time and brought very interesting features.

Users did not need to create an account to use the platform, just put a nickname (nickname), choose a room that was available and enter.

It is worth mentioning that any topic quickly became a great interaction with anyone, even without knowing if the user was really who they said they were (fakes have been around for a long time, it's not something that started on Facebook or Twitter).

Learn More: How to use Omegle and chat with strangers?

And even though UOL Chat is no longer as popular as it used to be, this tool needs to be respected since for many years it was one of the great means of communication for Brazilian Internet users.

In addition to this platform, it is necessary to mention ICQ, MSN and Orkut, other programs that made many young people happy.

It was common for young people in the early 2000s to come home from school and access the UOL Chat to interact for several hours on various subjects, from football to philosophical conversations.

And all the chat could be done in fixed, free or open rooms for users who subscribed to a plan.

Thanks to UOL Chat many people have found the love of their life.

Tinder? No, the scheme was to be lucky to find someone cool to exchange that cool idea.

In fact, UOL itself made a compilation with stories of people who met and built a relationship through the platform.


One of the coolest events that took place on the platform was the “Chat with Guests”.

It worked like this: a special room was opened and a date was set for actors, football players, musicians and even politicians to enter the chat to interact with the lucky ones.

Several Brazilian stars passed by in Bate-Papo com Convidados, like Banda Rouge, and if you didn't know that name, it's likely that you've at least heard the brilliant phrase: “Aserehe ra de re De hebe tu de hebere”.

Some personalities are famous to this day, such as journalist Caco Barcellos and actress Cleo Pires.

Anyway, UOL Chat works until today, as you can see below.

Now, UOL Chat can be accessed not only through the website, but also through the application for mobile devices with Android and iOS systems.

Once you join a room and start a chat, you are allowed to send audios, GIFs and photos.

The cool thing is that the person needs to click to view the media. This avoids certain constraints.

And if someone sends an illegal file, users who are in the room can report who shared the media.

It is also worth mentioning that the nicknames are colored in the chat, which gives more dynamics to the interactions.

Another cool feature is the possibility of doing lives without having to leave the room. If you are using the platform on your desktop, to take advantage of this feature it is necessary to have a webcam installed on your PC and access one of the rooms.


Once this is done, just click on the webcam icon that is in front of the nickname in the list of chat members.

The platform has seven main subject categories, which are:

Each tab has several subcategories, for example, in cities and regions, the user can chat with people who are theoretically close to you.

Already in “Created by Subscribers” are exclusive rooms for those who subscribe to the platform.

Remembering that Chat UOL is free, but there is the possibility to subscribe to the VIP package, which offers the following advantages: 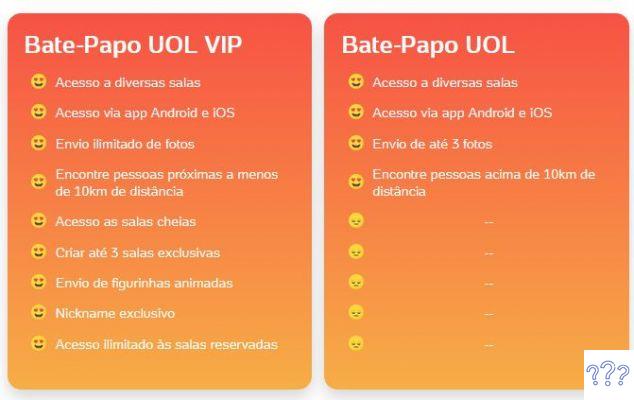 It is worth mentioning that you can try the VIP Package for 7 days for free.

In this way, a room can hold up to 50 people at a time. From this number, a maximum of 25 non-subscribing users can enter, and the other 25 seats are exclusive to those who purchased a VIP plan or are a UOL subscriber.

Learn More: Is UOL Play worth it? Know everything here

A very useful feature is being able to ignore a user who is bothering you in the room.

To access this feature, simply tap the “Ignore Participant” icon, which is next to the participant's nickname.

Once this is done, you will not receive messages sent by that person, the famous “block”. If you change your mind, you can also go back and stop ignoring the user.

Stay tuned that you are only allowed to access the same room up to three times. This is a method that UOL uses to avoid possible spam.

Through the main menu, participants can access up to eight different rooms. Therefore, to change rooms, you only need to access the “My Rooms” tab.

Tips for you to stay safe in UOL Chat

As much as the vast majority of platform users are just looking for interactions and having a nice conversation, you can still find some malicious users.

If you have any questions about the services, functionalities, plans that UOL offers to its customers, you can contact the platform through the Call Center at the following numbers: 4003 2002 (for capitals and metropolitan regions) or 0800 771 7774 (for other locations).

add a comment of Chat UOL still exists? Find out what's still going on there