Little Nightmares was Tarsier Studios' big debut game, bringing a world of nightmares into a dark, dense and disturbing atmosphere. The game was a huge success around the world, which gave the developers confidence to expand their creativity and ambition for a new title, once again renewing their partnership with Bandai Namco. Little nightmares ii continues with the proposal of being an adventure game filled with suspense, combining puzzles, platform and combat within a treacherous world, where danger is present in every environment.

The new project shows all the evolution of the studio, with a grander world, bringing an impressive audiovisual presentation and an even more disturbing narrative, becoming a more balanced project than its predecessor. Check out our review and venture into more details of this enigmatic and bizarre world.

An even more bizarre and unpredictable world

Just like the previous game, Little nightmares ii brings a story where the ability to interpret the facts is in the hands of the players. There are no dialogues, texts or explanatory scenes, so we must pay attention to each event and details of the scenarios to form the puzzle about what may be happening in that extremely bizarre world full of a dark atmosphere. The feeling of not knowing what might happen after a few steps, makes the adventure even more tense, and is also the great charm of the series. 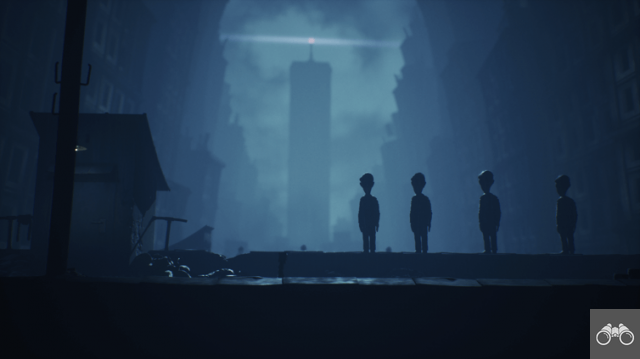 What we do know is that we control a boy named Mono, who is trapped inside a world distorted by the Buzz, a type of static that comes from a high transmission tower and that leaves its moderators in a kind of trance, as well as creating beings. abominable. When starting this journey, we find the girl Six, the same one who was the protagonist of the first game. Together they must join forces to try to understand what kind of entity exists in the imposing Tower, and if they can, somehow, stop the Buzz or simply escape that hell.


Getting to the Tower will not be an easy task, because in addition to several evil traps, and the very dangers of the place that is in constant destruction, they will still have to find its residents, who are even more distorted creatures than the ones we found in the first one. game, and which also appear even more dangerous. They are disturbed beings, and they bring delicate themes to the story, but in a subtle way, so that we keep thinking about the subjects, even if they are not thrown in your face. This only highlights the brilliance of creating this entire universe of Little nightmares ii. 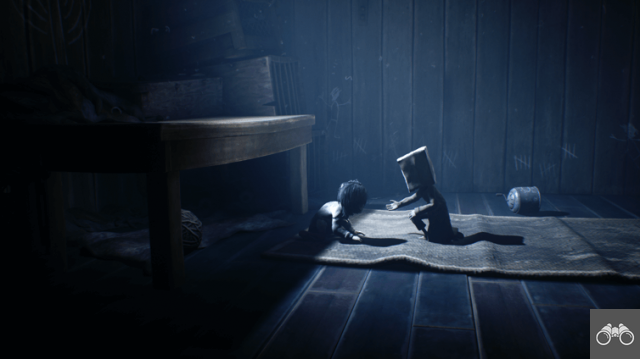 The interaction between Six and Mono brings a very interesting dynamic to the plot, as we can feel the connection between them growing as they overcome obstacles. Mono is always ready to help Six, just as the girl also helps her companion to follow the journey alongside her. Without going into the field of spoilers, this relationship is very well constructed, in a way that offers great weight to important events within the narrative, making the game unforgettable, in addition to being a full plate for fans of theories.

Everything is bigger, and better designed, which enhances our feeling of immersion in that world. We are on a constant search for any possible clue to understand what is happening around those children, and that feeling is delicious.

More possibilities to face this journey through fear

Tarsier's idea with Little Nightmares it's to give us a sense of how small and vulnerable our character is within that hateful world, and how powerless we are in the face of the challenges that come our way. Even though in most cases we really just need to run or hide, the game shines with new mechanics to spice up this journey, while intensifying the feeling of dread in the chase sequences or reinforcing the latent fear when we need to hide.


Little nightmares ii maintains its side-scrolling 3D plane, which expands and also makes our journey difficult, as it makes everything even more interesting to explore, it also requires more attention on where to step, run or hide. The camera also remains fixed, changing according to the developers' desire for each scene. 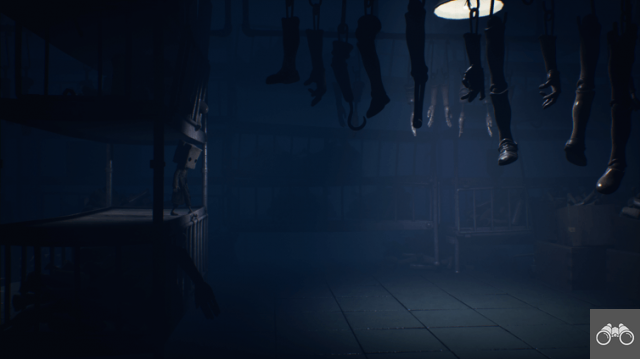 In general, it is a platform game with puzzles that we need to decipher in order to proceed. Everything becomes crucial to determine whether the outcome will be the life or death of little Mono. Much still follows that old trial and error system, but everything is perfectly timed, never taking us away from the total immersion in the atmosphere of the game. Nothing is overly complicated, which works perfectly to challenge us in just the right amount.

Six is ​​a new gameplay mechanic, as the girl helps us to climb to certain places, push objects, or even hold us with her little hands when we need to jump very long distances. This added an interesting co-op feature, and even if it's just an AI, it does bring some comfort within such a lonely world. There are also chapter-specific mechanics, such as a flashlight that helps us overcome dangers hidden in the shadows or a remote control that turns TVs on and off, serving to solve other interesting puzzles. 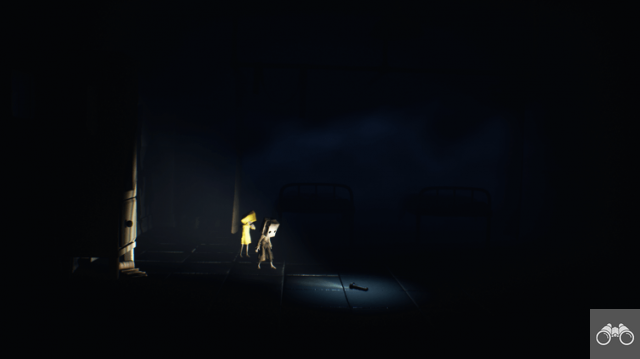 Little nightmares ii still adds an unexpected combat mechanic, but don't expect Mono to turn into a freak destroying machine, as the idea is that he still gives that feeling of helplessness in front of his opponents. Even so, there are points in the game where we will be offered some kind of melee weapon, like a hammer, for example, and we will have to find the right time to hit the creatures and be able to continue on our journey. It's not a sophisticated system for battles, and it's more of a puzzle piece than an action element. A nice addition that could be further refined in the future. 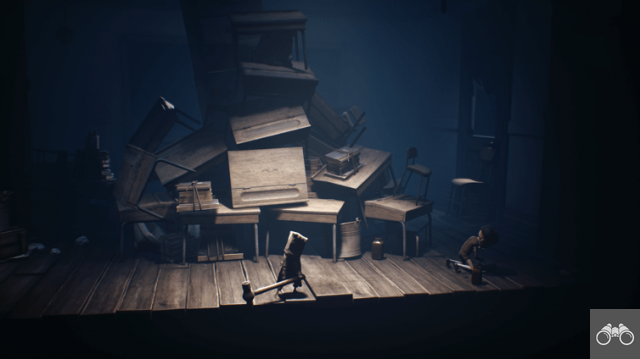 The campaign is short, just like the first game, and can be completed between 5 and 6 hours. There is a good replay factor for those looking to do 100% and also collect all the collectibles, which can even unlock an interesting secret ending that adds more fuel to the fire of theories.

Universe even wider and more terrifying

All the design in the world created by Tarsier to Little nightmares ii it's impressive. The game continues to bring that feeling of immensity in front of the protagonist, but this is even more grandiose in this second game. The scenarios mix claustrophobic indoor environments, like others that are open and that use a beautiful open camera to reinforce how small we are in front of that distorted world. An impressive sense of depth.

Each of the five levels has its own unique character, which is masterfully exploited by the studio, whether bringing us a feeling of horror, disgust, curiosity or sadness. Scenarios full of details and accurate points of shadows and light, which enhance the feeling of fear. The characters and creatures are also very well designed, with the children conveying this feeling of helplessness with their skinny bodies, and the bizarre creatures showing their danger and decay well.

I played Little nightmares ii both on Xbox Series X and Xbox One X and on both consoles the performance is excellent. No frame drops, long loading times or textures that take time to load, the end result is clean and well presented. 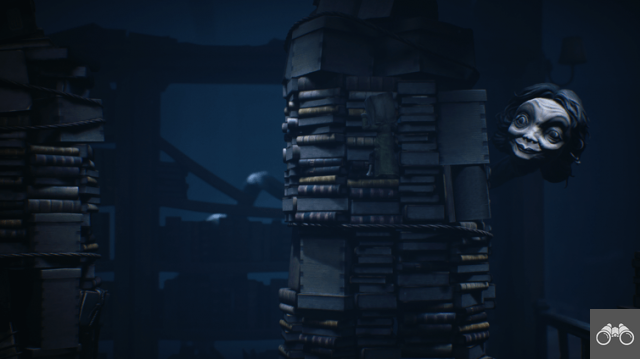 As for the sound, he's still superb, as if he were a game character. The noises of the scenery, of the wind hitting the structures, of an object falling to the ground… everything is brilliantly inserted. The soundtrack remains impressive, further increasing the quality and immersion of this experience. Whether in calmer, more agitated or revealing moments, the themes leave everything with even more impact.

Although there are no dialogs or documents, the game's menus are all in Portuguese from our country.

Little nightmares ii it brings the foundations and roots of its predecessor, but expands its universe, becoming an even grander work. The audiovisual presentation is even more neat, the mechanics have evolved and made the journey more interesting, and the story continues with its mysteries, making the player stay on the screen until the last second in search of answers. Assembling the entire puzzle of the plot continues to be the great highlight of the series, and Tarsier managed to make everything even more immersive and full of impactful moments in this second game.

If you are a fan of macabre titles, with an atmosphere full of suspense, a plot that leaves you assembling several theories, and with everything tied up with an impeccable technical package, Little nightmares ii this is a must-play game for you. As for me, I'm even more of a fan of that universe, and I've been looking forward to what might come next with the twisted and unpredictable world of Little Nightmares.