HALO is one of the biggest franchises in the world, with more than 20 years since the release of the first game, called Halo: Combat Evolved, which redefined an entire genre and dictated trends in how online multiplayer would work and paved the way for Xbox Live's success. Master Chief, the protagonist of the series, is a symbol just like Sonic or Mario are for other platforms, such is the importance of this work for the industry. When you think of Xbox, you can't help but think of Spartan 117.

Halo was born in the hands of Bungie, which leveraged the Xbox platform to its enormous level of quality that we have today. Bungie left the command of the franchise, and walked its way with Destiny, leaving responsibility in the hands of 343 Industries, a studio created exclusively to work with the saga. Among more mistakes than successes, my distrust only increased with the studio, even doing a good job in Halo 4 and then on average with Halo 5, nothing could be stranger than the first presentations of Halo Infinite, in which I had a great fear of what the franchise would become. It took years of waiting, so we could finally get our hands on the game.

First we had the launch of multiplayer, with tests that came out months before the launch of the campaign. As we said in our review, we were bestowed with a great game, which overshadowed the release of other games in the genre. But the campaign, which has always been an important part of the franchise, was a big unknown.

Did 343 manage to bring about much-needed changes by listening to its players, or did the studio dug its grave for good? We'll find out next if we've caught a glimpse of the franchise's future or its doom...

Who doesn't know the famous Spartan 117? Master Chief, as I said earlier, is a symbol of hope and strength, which in addition to putting fear into enemies, is a source of inspiration for allies. In the first few minutes of Halo Infinite, we are impacted by events, which put the Master Chief in danger. This soldier's frailty is important in our journey through Zeta Halo, which hides ever more real dangers. 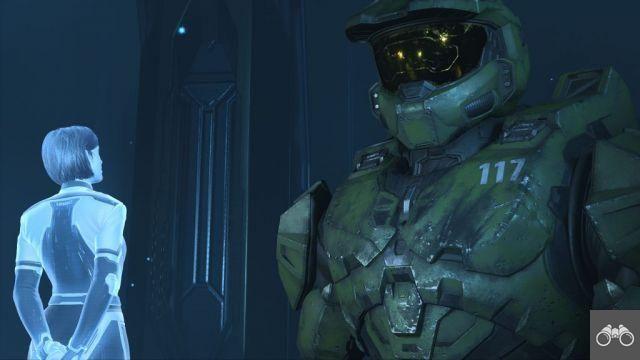 Master Chief is even more human.

Our entire adventure is a journey of growth for the character, who even though he is a veteran, still has questions and needs to put an end to certain events. Like a phoenix, we need to rise up and start something new.

I was very happy with the humanization of the protagonist, who, despite being a great brucutu, has strong feelings. He's there to complete his mission, but he also has personal reasons, and that breaks any simplicity in the script. We've never been this connected Chief, because we feel what he feels and that's magical.

One of the greatest symbols of Halo Infinite it's the beginning, yes, as much as the game is not a reboot, it can work like one. In the first few minutes we still have something very similar to the transition of linear environments, something that has always worked in the franchise. After all the introduction, we are faced with a very vast world to explore. Zeta Halo is available to live our adventures however we wish. Of course, many things are not available, after all they are part of the plot, but yes, Halo Infinite can be considered a semi-open world game.

The first comparison that immediately comes to my mind is the Far Cry franchise, which has a world with many interesting things to do. Halo Infinite took those inspirations and brought bases to take, targets to eliminate and some collectibles. The big difference is the reward for completing these secondary objectives, which bring new weapon variations and more story content. If you want to know more about the franchise's history, both past and present, it is important that you collect the audios scattered around the map and that are hidden in some bases. 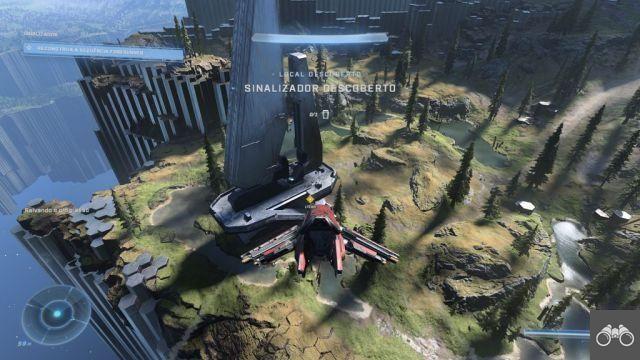 Zeta Halo is extensive, but we have different ways of getting around.

Another interesting aspect of this exploration by Zeta Halo is that once we have mastered a base, we have the possibility to choose a vehicle and weapons. As you advance further in the story and on the map, more things are unlocked, making our adventure easier. Speaking of ease, the difficulty curve is very good, with variations in some places. If you choose the standard difficulty, you will have reasonable difficulties at some plot points, but nothing that is too impossible.

The history of Halo Infinite is told in an exemplary way, with lots of dialogue between the Pilot, Master Chief and the new artificial intelligence called Arma. This trio of protagonists worked, as we managed to merge the past and the future. Master Chief knows everything about the universe, as does the pilot, but the weapon is a new being, who is eager to know everything around him.

Everything in the story is heading for a reset, let's just say that even though it's a continuation of the Chief's stories, we really feel like we're making a new path to walk, a new journey. 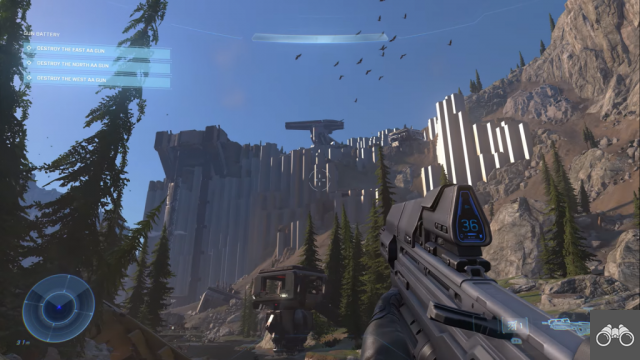 The landscape of Zeta Halo is beautiful.

I loved the way the story was told, that even though it's something like an open world, we have key plot points, which culminate in something bigger with each step taken by the Chief. Remember I mentioned Far Cry as a possible inspiration? Some events are reminiscent of encounters with villains, something that surprises the player.

the villains of Halo Infinite also steal the show, especially Escharum that threatens us from the first minutes of our adventure. never in a Halo we had an enemy that puts the Chief in such danger. To make matters worse, Escharum is not alone, he has a huge army by his side, who will do anything to prevent us from reaching our goal. In the army of the banished we have some that stand out and we will have a lot of problems dealing with these bosses.

Speaking of bosses, the battles are incredible and surprise us with every danger we face, with enemies that really threaten us, putting our skills to the test. Even at times I had to mix the Chief's skills to face some enemies, and that's quite interesting.

One of the points I was most curious about was how the gameplay would be in the new Slipspace Engine, something that was satiated in multiplayer and later confirmed in the campaign mode. the gunplay of Halo Infinite is pleasurable, letting the player feel the differences of each weapon. In addition, the engine does a great job of precision, even playing on a controller, we are easy to shoot.

Unlike the other Halo, here we can make improvements to Master Chief. These upgrades are used as abilities, which involve a shield, that powerful dash or even a probe to detect enemies. Many of these abilities have been seen before in previous games. 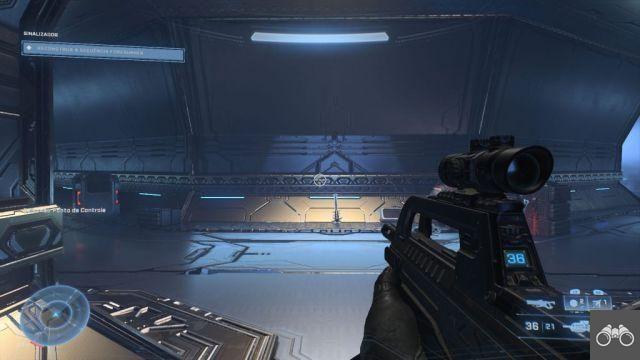 The internal environments are very familiar.

The big news is for the Grappling hook, which is one of the most amazing things added to the franchise. Many will say that it is nothing new in the gaming world. Yes, it is something that already exists. But the way it was incorporated, it ended up becoming something crucial to the gameplay. First, you can move around the map quickly, in addition to being able to climb even more difficult places and find several surprises. Second, that we have a new way to play, with actions to evade and steal weapons or vehicles, in addition to using it as a combination of attacks against our enemies.

Not everything is flowers, because one of the biggest mistakes of Halo Infinite it's your selection of skills and grenades, which is used with the d-pad, making it somewhat imprecise. I hope they can change that aspect, perhaps including a simple skill wheel, something that exists in most shooters.

Another important point that was missing was the cooperative campaign mode, which many players miss. A few moments were clearly made for co-op play, mainly for walking the Warthog with his friend shooting a turret. It's a classic Halo element, and it was lacking in Infinite. It is worth remembering that Co-Op for the campaign will be added, free of charge, along with the arrival of the second season of multiplayer.

Even with a semi-open world, Halo Infinite does not compromise on its performance. My entire journey was done on an Xbox Series S and I can say that the youngest remained standing.

Zeta Halo even being a homogeneous landscape is very beautiful, showing the Slipspace Engine's ability to create vast environments. I feel that the variety of biomes was lacking, but that simplicity is something that is present in the context of the game.

Weapons and vehicles have well-built designs, bringing new nuances, but without leaving the original air aside. The enemies don't bring such exquisite detail, but they are far from ugly. The main highlight is the Master Chief, who has his armor damaged by numerous battles, something that shows attention to every detail of the character's construction. 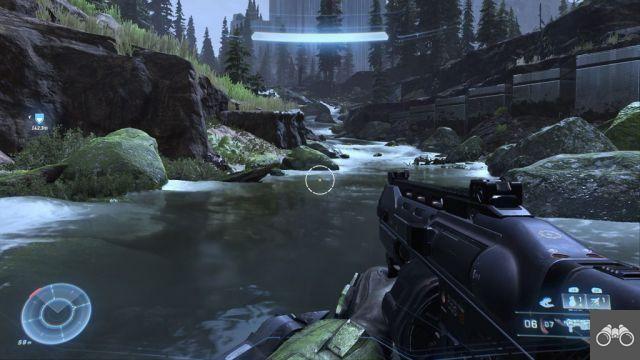 Zeta Halo has some beautiful environments.

The sound is spectacular and attracts a lot of attention, from an incredible soundtrack, to well-built sound effects. It is quite clear that the delay time was very important to improve these aspects.

Another point that stands out in the sound is the dubbing, especially in the grunts, which have the funniest dialogue in the entire franchise, seriously. The villain Escharum is also a highlight, possessing an imposing voice, adding that air of menace.

The Halo Infinite sacraments the work of revival of 343 Industries, which was much questioned by players and press vehicles. Many knew the challenge of starting an engine from 0, but even so our passion spoke louder and we wondered if Halo would really be Halo, and that's what really happened.

The gameplay is exquisite as the multiplayer, giving the player pleasure to enter a combat or simply explore the secrets of Zeta Halo. The highlight of this item is the Grappling Hook, which, despite not being a novelty on the market, has become a must for Halo. The technical work with the engine is spectacular, mixing good graphics and a sound that enchants. Thank you grunts for your amazing dialogues, you are the icing on the cake. Master Chief was also better enjoyed, with a humanization never seen before, something that unites the feelings to the player, honoring the past, but with an eye on the future.

The future is already beginning to be paved for Halo Infinite , mainly for creating new narrative arcs and closing the existing ones with a flourish. The story can still tell a lot about other characters, after all, according to 343 we will have a game that will live for a long time, so don't be alarmed if we receive something great in 2022 for this journey.

It is worth remembering that the Halo Infinite is paid, but is part of the catalog of the Xbox Game Pass. The multiplayer is free-to-play, enjoy and check it out our full review of it.