DARQ: Complete Edition this is a complete edition of the psychological horror game DARQ, which in addition to the base game, comes with the DLCs “The Tower” and “The Crypt”. It is a creation of Unfold Games, and it was published by Feardemic, which is one of the teams that are part of Bloober Team (The Medium). With an atmosphere that is very reminiscent of Tim Burton, and an open narrative way of telling its story, the game is also reminiscent of games like Limbo, Inside and Little Nightmares.

We follow Lloyd, who is trapped in an eternal loop within a world of nightmares, where he is challenged to understand the rules and puzzles of this bizarre place in order to find a way to wake up. A simple idea and a recurring theme in games of the genre.

Does DARQ Do you have the strength to stand out with so many options so strong on the market? Let's find out in this review.

Everything we know about the plot of DARQ comes from the description shared by Unfold Games, as the game itself tells us absolutely nothing. It's all up to our imagination and interpretation. We follow Lloyd's personal hell as he lives a desperate routine in which he seeks to wake up from a nightmare. All attempts fail and he always returns to the starting point, which always starts with an out-of-body experience. While he is living this loop, which seems endless, the threats of this world become increasingly bizarre and macabre. 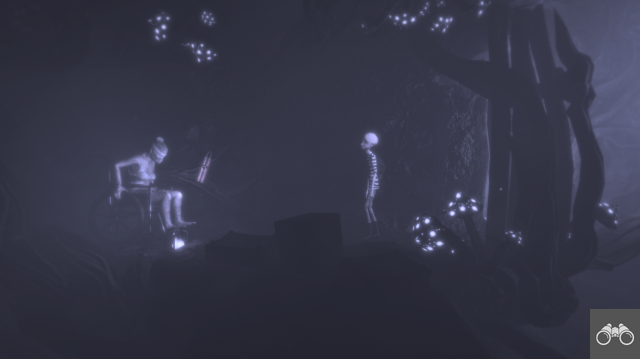 We are dropped into the world of DARQ without knowing anything about what we are living. No dialogue, cutscenes or narrative moments to make us connect. Everything is extremely vague. I love the subjectivity of games like Limbo, Inside and the Little Nightmares franchise, which I mentioned above, but in them there are small narrative hints that enrich our reasoning in search of some meaning for what we see on screen. I missed those moments in DARQ, for they would surely make your world richer.


Still, I spent a good deal of my experience trying to put the pieces of Lloyd's story together. Seeking to find meaning in some character that appeared, or some object inserted in the environments. The created world is interesting, it just needed to be developed a little more.

A creative manipulation of physics

DARQ: Complete Edition it's a 2D side-scrolling adventure game, in which we basically have to explore the environments in search of clues and objects necessary to solve puzzles and thus progress to the next area. All happening in a total of 7 chapters of the base game, plus the DLCs “The Tower” and “The Crypt”. There are also enemies, and as with most games of the genre, we just have to be careful not to alert them, as Lloyd doesn't stand a chance against them.

First, exploration. the world of DARQ has its own physics and our character can manipulate it in different environments. We can literally rotate the scenarios, which greatly expands the options of where we can explore for a solution to move forward. On certain walls, Lloyd approaches as if he's listening to something, and this is a subliminal signal of the game, and that you have to discover for yourself, that that wall can be manipulated by you to find a way to go on your journey. Press the A button and watch the magic happen before your eyes. This mechanic is one of the best things about the game, whether in quieter moments where we analyze where we can go, or in faster sequences, manipulating the physics of this world is delicious.

Or second important pillar of DARQ are your puzzles. Each chapter has its own set of challenges, always bringing a fresh perspective on that world, as well as our way of going through it. Although different, most of them consist of finding an object to activate some device and so you find a new clue or advance in the chapter. Even though it looks like a cheesy thing, the Unfold Games studio was very creative in creating the puzzles and they never seem repetitive. At one time we are manipulating magnets, at another time we become a conductor of energy so that we can blow up walls, or even look for amputated legs and arms to be able to activate devices. Trust me, surprises are guaranteed. 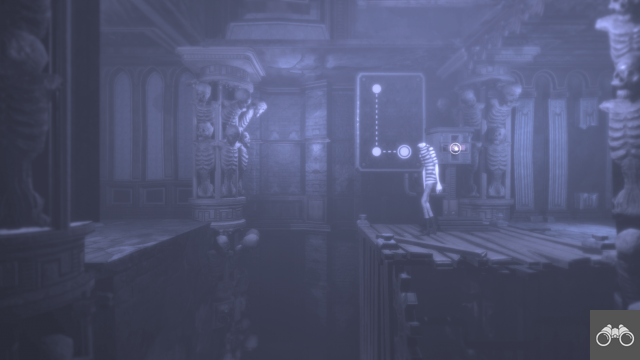 And finally, as mentioned above, DARQ it also has enemies to further complicate Lloyd's life. These warped creatures have the most bizarre types of shapes. I won't say too much about it so you might be surprised too. When we find these beings we need to use stealth, in which we crouch to make as little noise as possible, and even then we need to walk slowly so as not to alert them. There are also specific points that we can interact and hide with. It wasn't my favorite mechanic of the title, as I found most of the stealth sequences to be too slow, but since the game's brilliance, and focus, is on exploring physics and puzzles, these sequences ended up being valid additions to add these creatures. and somehow enrich the story. 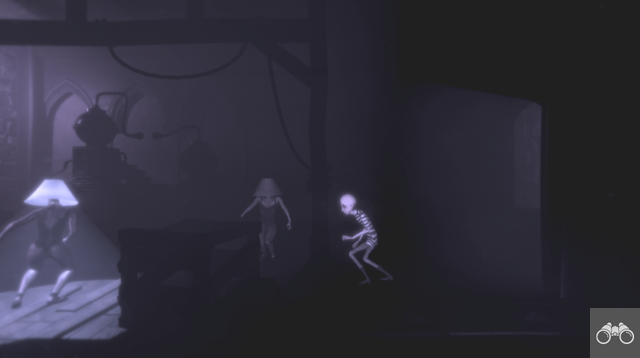 The game is short, lasting between one and two hours, but it has the perfect time to not get bored with the puzzles and exploration, and still leave us with a great curiosity about what the hell could be going on there.

The version I played of DARQ: Complete Edition was updated to Xbox Series X, where you can play with the cinematic mode where it runs at 4K 30 FPS, or through the performance mode with the title performing at 1800p 60 FPS. In both modes the game performs very well, with good textures and no framerate drops, in addition the loadings are practically instantaneous. Unfold Games has also joined Smart Delivery, which means that those who purchased the title on Xbox One will be able to upgrade it for free to the new generation without any complications.

the world of DARQ, as well as the atmosphere created by the developers, give the player the feeling of this frightening, strange and difficult to decipher world very well. As there are no explanatory dialogues or scenes, visual reinforcement is very important to express what is happening in the narrative, and we can see a lot of this in the inserted objects, in the presented scenarios and in the enemies that appear. The studio was very creative in transforming ordinary places like a theater, hospital or a train and bringing them into this dystopian world of Lloyd's nightmares. 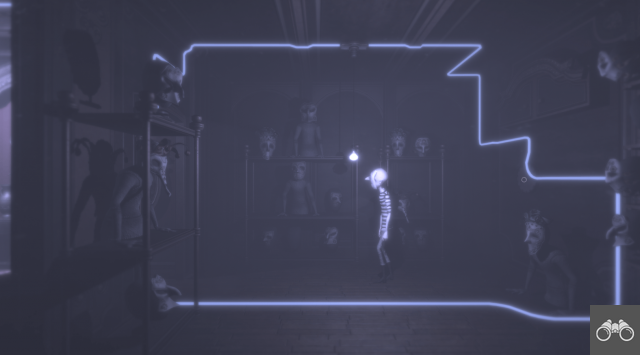 In terms of sound, we have a virtually non-existent track, as our full attention is focused on the noises that surround us. Play with headphones, because every little noise we hear brings the feeling of agony and fear that hit the protagonist, who can't get rid of that dark world.

Despite not having dialogs, the game has an interface all translated into the Portuguese of our country.

DARQ: Complete Edition it was a pleasant surprise. I felt involved by its universe with a delicious touch of Tim Burton, its subjective narrative and intelligent puzzles with the fun use of physics. Although I thought that more narrative elements could have been added to enrich that world, I really liked the whole fantastic atmosphere created by Unfold Games.