Vampire: The Masquerade - Coteries of New York is a game from developer Draw Distance, which features a very intense and immersive central plot, and which not only brings a beautiful introduction to the world of Vampire: The Masquerade, but should also pique your curiosity to know more about it.

Before diving headlong into this universe, you'll have to choose between three pre-defined characters. A rebel of the Brujah clan, with the Disciplines (powers) of Speed ​​and Potence. The other is a Ventrue snob, with her famous control over Dominate and Presence techniques. And finally, an artistic Toreador, with its strong Presence and Auspex. The choice of these characters creates a series of facilities in some dialogues, and they may have been chosen precisely because they present an easier way to develop the plot. Don't want an unnecessary complication? Dominate someone to do what you want. No chance in a physical confrontation? Use your supernatural speed.


Each of them has a different introduction and that brings out the personality of each one. It also offers different ways of approaching and concluding situations, which will give you the curiosity to play with each one and see what changes. 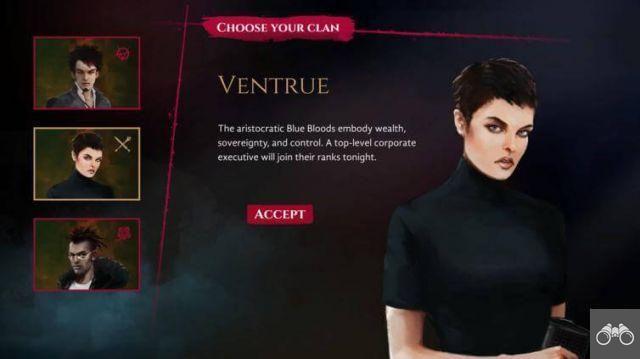 Em Vampire: The Masquerade - Coteries of New York you are a newly created vampire, but you parachute into this world, you don't know what is happening, because you understand that you are dead, but you are still, in a way, alive, but with an inexplicable thirst for blood. Out of nowhere, a strange, and frightening, man appears, who orders you to follow him, so that you have some explanation of what happened to your existence. Saying more than that can spoil your discovery, so I'll stick to the more general details.

When you arrive at a meeting, with people who seem important, you are introduced to the Camarilla, which is an organization that focuses on keeping vampires dominating the world through the shadows, and in the case of the game we are focused on a species of the New York underworld. . This system of hiding the existence of Vampires from humans is called the Masquerade, and its transformation into a somewhat public place broke this crucial rule for vampire society imposed by the Camarilla. A meeting is held and the sentence given by Prince, who is the great leader of all, is Final Death, where you will cease to exist once and for all. You can ask for mercy, and a beautiful woman named Sophie will be your protector, and guide you through this new life alongside the Camarilla and the Vampires who protect the Masquerade. From then on, his journey begins amid discoveries, many insidious political schemes and uncomfortable alliances. 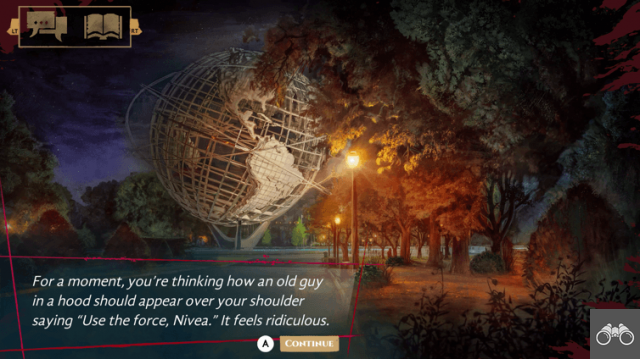 Your main mission in the game is to create your own Coterie, a kind of group of allies to help you in a dangerous situation, as well as you can help them in any need. They won't be your friends, but they will be the closest thing to anything like that in such a treacherous society, and the game manages to convey that feeling in a very mature way. There are four clans you can contact for this partnership. We have a conflicting Tremere sorcerer, a fun Nosferatu detective, a Gangrel with conflicting loyalties, and a Malkavian with her own unpredictable goals. They all offer interesting plots that hold you until the end of each one. However, depending on your choices, you may not even be able to recruit these allies, which is more than enough reason to try to forge these alliances in a new gameplay. There are also side missions, with very unusual endings and characters.

Each of these quests also gives you insights into this new world of Vampires you've just discovered, with new perspectives on Camarilla dominance, respect, or lack thereof, towards Masquerade, and even the discovery of groups of Anarchs. , who do not believe in or follow the strict rules of the Camarilla, and who have their own way of living in society. That is, there's a lot to explore and discover in each new dialog and text that appears on your screen. 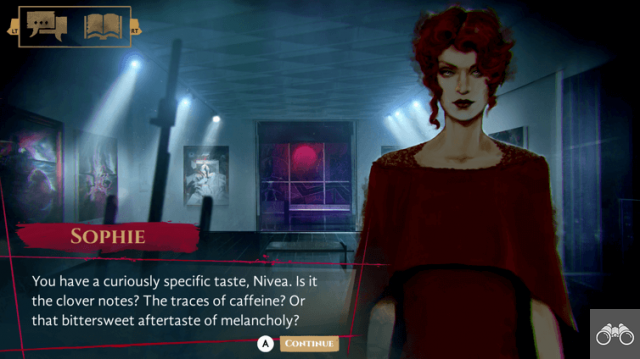 Despite an immersive plot, I missed more details about our character's past and his personal development as a Vampire, with something that wasn't so tied to meeting other people already established in this society, but something more intimate, between him and his inner beast. Overall, it's a story worth following, particularly as it shows the complexity of a Vampire society in an era of modernity. Even though our character lacks a little bit of that deeper touch, it's a very interesting experience, both for someone who was already into Vampire: The Mask like me, and for someone who wants to know a little about this universe.

As I said at the beginning of this analysis, Vampire: The Masquerade - Coteries of New York It's a Visual Novel, so you'll spend all your gameplay reading texts and dialogues to make choices, which serve to direct events. That's basically it.

The game has a series of choices that change the allies that will be by your side, the outcomes of the missions, and even an early death in the game, bringing weight to every decision we need to make. But unfortunately, like many other games that are based on player choices, Coteries of New York doesn't offer a very drastic change to its events, and regardless of your decisions, the key events will be the same, changing very little between each character. And this is evident when restarting the game looking for other perspectives. Even making very different choices, the outcomes remained the same, with slight, and even insignificant, variations. For those who just want to check out a good plot with Vampires this is not a problem, and the game is very competent at this point, but if you are looking for something where your choices have a big impact on the narrative, you may end up being disappointed. 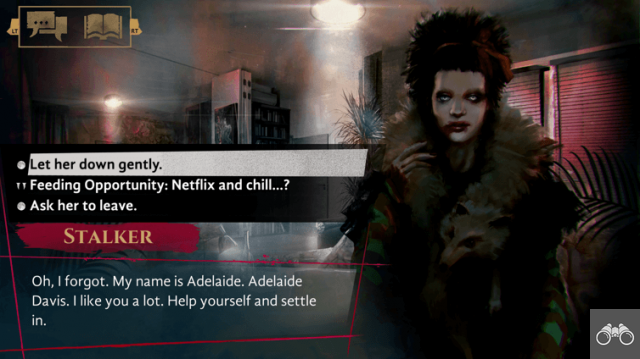 Still based on player choices, there is a Food system, as as we already know, Vampires feed on human blood, and it's not something you can call Ifood and order casually. Additionally, feeding indiscriminately can break Camarilla rules, either by being discovered or feeding on another clan's territory. In this way, we constantly have to choose between feeding on someone or letting the victim pass. Feeding quenches your thirst, but it can leave you vulnerable to prying eyes, or in Ventrue's case, it can make you vomit blood that doesn't suit your very specific taste.

One big problem with going without drinking blood is that this state can wake up your inner beast, and make you go out of control into a killing machine, which will also go against Masquerade and Camarilla society. And this also has an impact on the dialogues, because when you are at high levels of hunger, some more coherent options are disabled, because in your unstable state, due to lack of blood, it would be illogical to make a centered decision. During my three gameplays, one with each clan, I chose to feed regularly and also give voice to the beast, but there was practically no real impact, which disappointed me a little. Overall, it's a smart system and it brings an interesting atmosphere of what would be a Vampire's daily conflicts to feed. Even though it lacked a bigger impact, it brought a good nuance to the plot.

The backgrounds are very important for a Visual Novel, because as you are all the time looking at texts and dialogues, the background needs to be interesting so as not to tire this progression. Vampire: The Masquerade - Coteries of New York brings very well designed environments that have light animations, like the flame of a candle, a smoke on a street…. Everything is very subtle, but it adds a lot to the intimate atmosphere of the plot and that universe. The art of the game, as a whole, is impressive, both the scenarios and the characters, which even static, bring all the soul of that world to the screen, and it's impossible not to feel immersed in it. A flawless package.

my biggest problem with Coteries of New York are your technical problems. The first one almost made me give up on the game. My first character was a Ventrue, and one day there was a bizarre bug in the game where there was no button for me to proceed, making it impossible to continue the gameplay. With a lot of patience, because I was really interested in finding out the outcome of it all, I made a new character, but the same mistake happened. So I went for a third save slot, but this time I managed to finish. However, this time, and the other two, I went from start to finish without saving, which led me to think that it might be a game error that corrupts the save files. I have already passed this feedback on to the developers. A very annoying problem that can make the title unplayable.

The save system is really bad. Not only because of this possible error, but because it is completely manual, and only has the option to “Save and Exit”. This not only limits the freedom to create multiple saves and explore more choices, it can also lead to a total loss of progress, if the game crashes or you run out of light, for example. Also, it's pretty annoying every time you save the game you have to go to the home screen. Another minor problem, but which can also bring complications, is the rhythm at which the texts appear on the screen, because while some give a slight pause between one page and another, at times the game follows a different speed and you can end up performing a choice I didn't want. It happens little, but it does. 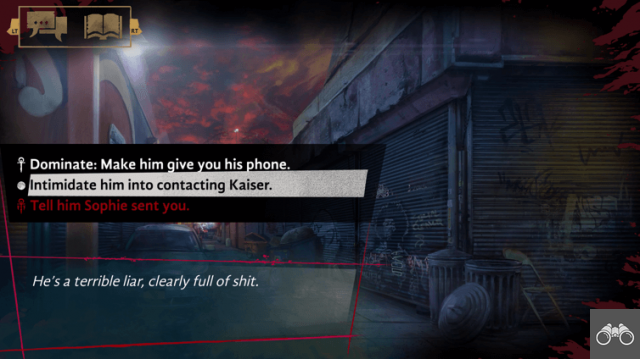 A sound part of Vampire: The Masquerade - Coteries of New York it's incredibly atmospheric, because with the lack of voices, the main protagonist is the soundtrack, and it doesn't disappoint. The themes are deeply dark and powerful, giving weight to what happens on screen, whether injecting more power into more tense scenes, or showing, with ease, the complexity of each character and their narratives. It's really mesmerizing.

Unfortunately, the game is all in English, which makes it practically impossible for those who don't have good notions of English to understand the narrative and its progression well. A pity, because it limits the audience of the work very much.

Vampire: The Masquerade - Coteries of New York it was my first experience with a Visual Novel, and it was a very good first impression of the genre. I'm a fan of the Vampire: The Masquerade universe, and the game brought me a good nostalgia for the RPG wheels of my adolescence, which kept me immersed in its plot all the time. In addition, the wealth of details about this complex society of Vampires will please both fans of the theme and those who seek to know more about the incredible universe of The Masquerade. The icing on the cake is a deep audiovisual presentation that brings all the feeling of this world, offering an atmospheric package within the work.

Despite some rather complicated technical issues, the lack of a Portuguese localization, and the need for more impact for our choices, Coteries of New York is a good game for fans of Vampire: The Masquerade, and it's an interesting warm-up for a year that promises to be amazing for those who enjoy this work.

add a comment of Análise – Vampire: The Masquerade – Coteries of New York