Life is Strange is one of the best-known franchises for bringing together current and feeling-filled stories. This type of game works very well to raise questions, which we are not always able to understand in other media.

Em Life is Strange: True Colors we follow the story of Alex Chen, a girl who is invited by her brother to live in the small town of Haven Springs, a charming and welcoming place. But nothing is as simple as it seems, and Alex's world is turned upside down when her older brother dies. It will be up to you to unravel the mystery behind this tragedy.

Does Life is Strange: True Colors Is there something different or is it just another sequel? Find out in our review below.

The full game will be available at launch, unlike other titles in the franchise that arrived in an episodic form. In this way, True Colors offers a complete, gap-free experience.

THE CITY OF COLORS

The city of Haven Springs is one of the most important characters in Life is Strange: True Colors, and where the plot of the game takes place. The five chapters are mostly covered in the city, so it will be a place very explored by the player.

The first place we know is a beautiful bridge, in which we have a beautiful moment of reunion with Gabe Chen, the protagonist's brother. During conversations with him, we have the choice to act according to our heart, something we will do a lot. 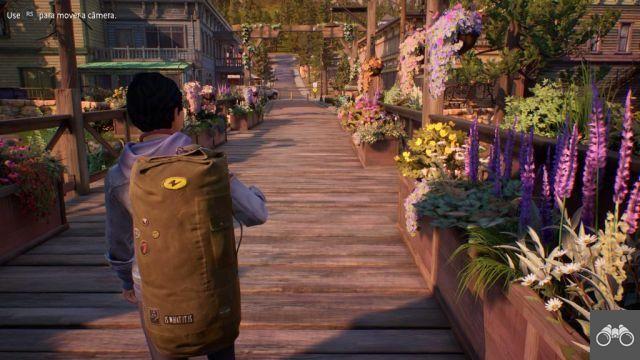 In a few minutes we already know that colors illustrate our feelings.

Haven Springs is a city full of color, something that is part of the game's theme, with beautiful flowers scattered throughout the streets, quickly indicating that it is a welcoming place.


As soon as we left with Gabe to meet the people, we also got to know the local shops, which are not very explored, with a good part of the history focusing on a few places, such as the record store, the flower shop, the bar, the pipe store and herbs and also the police station. Of course these places have their rooms, but I feel that the city has been little explored. I feel that this focus in some places was on purpose to show how small the city is, and to focus on the supporting characters, but it limited the area of ​​exploration a little bit. 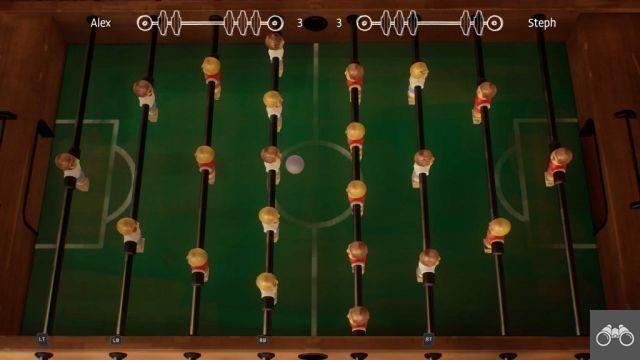 Foosball is a really fun game, or is it silly?

Some places in Haven Springs have mini-games, such as a foosball (foosball), or even an arcade where we can have fun with some characters.

The city is also home to some events such as the spring festival, in which some exciting moments take place. There's also LARP, which is a kind of RPG, in which townspeople are given characters to play. With him even the gameplay changes, with turn-based battles, use of potions, scrolls and even magic. LARP was magical and surprising, giving space for moments that unite smiles and also many tears. 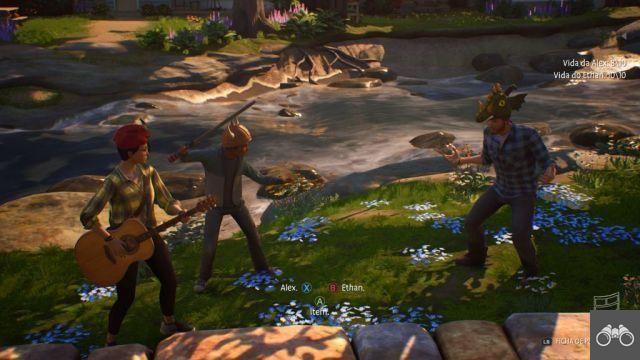 LARP is one of the best parts of the game.

Alex Chen is a very interesting character, with many layers to be discovered and also to be molded. As we play, we learn more and more about her, and her story is full of twists and turns.

Alex was raised in a kind of orphanage, having a troubled growth and a life not easy, whose strength was increased due to these great difficulties. The character has a very interesting power, which is to feel people's feelings, and this is illustrated with the colors. I confess that I disdained this kind of power, but after playing for a few minutes, and seeing how it works perfectly in the plot, I understood his choice. 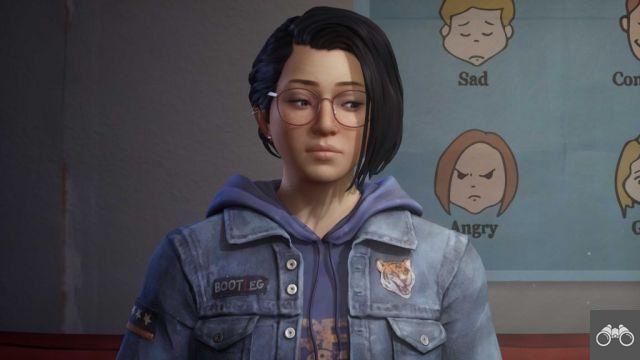 Alex is a strong character.

In addition to knowing how people are feeling, Alex can absorb that feeling and this makes her quite dangerous at times. Which makes some choices very difficult, bringing enormous weight to decisions.

In the history of Life is Strange: True Colors all characters have space, with an interesting development for each one. This dynamic also makes it possible for Alex to understand his most hidden fears and feelings through his powers, which gives him a certain advantage, as well as a great burden to carry.

Starting with Gabe Chen, his older brother, we created a strong bond in the first chapter of the game, with fun and very tense moments, something that only strengthens our emotional bond. Brother are not always united, but here we have a great harmony in both, which will be explained and questioned at various moments in history, which only strengthens our objective. 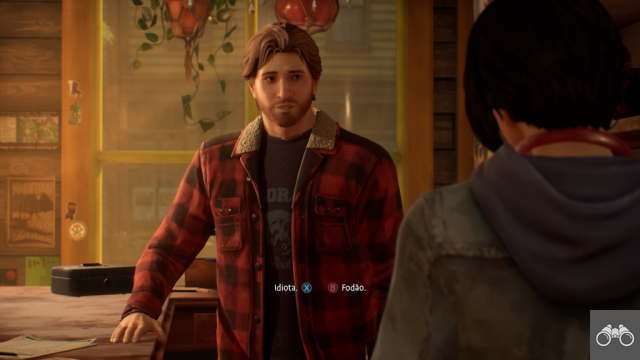 Alex connects with some characters, as does the player as well.

At the other end we have Jed and Ryan, father and son, both of whom are very connected to Gabe, and later to Alex, with interesting dialogues and difficult decisions. Steph is another character that ends up getting very close to the protagonist, as she has always been a great friend of Gabe, also becoming very special to Alex. Steph is already known to some franchise players, as she appeared in Life is Strange Before the Storm, but you don't have to play it to understand the character, who was introduced in this game in a great way. Mac and Riley are a nice couple, but full of problems in their relationship, especially with Gabe, something that drives much of the plot.

In addition to these characters, we have others that also have their highlights, with very interesting moments with Alex, especially in his hidden moments, in which we can explore secrets hidden in his heart. 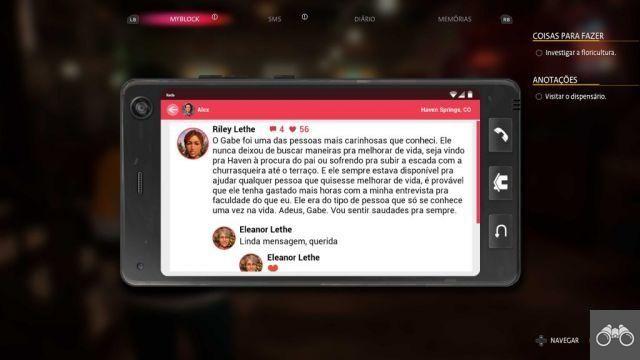 Some dialogues strengthen our bond with the characters.

Alex Chen has a cell phone on which we receive some messages, as well as being able to read the interactions on a kind of twitter, where we can see comments and reactions to events in the city.

The history of Life is Strange: True Colors revolves around the death of Gabe Chen, whose event adds a very interesting out-of-town level, putting Alex's powers into action to unprecedented proportions. It was very interesting to see other aspects of the powers, with elements that blend in with our reality. 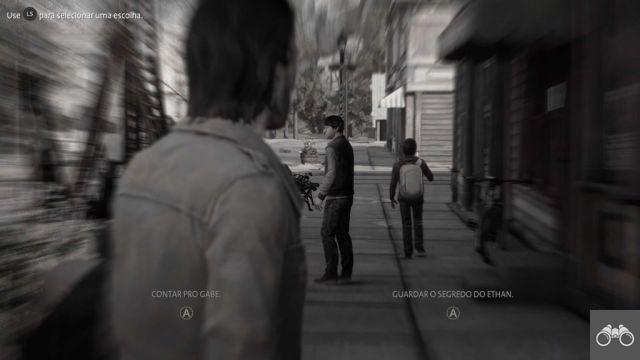 Some choices carry different consequences towards the end.

Grief works in different ways for both the inhabitants of Haven Springs and for Alex, who will have to deal with feelings on the surface. Increasingly, the choices will be more difficult, so choose wisely. These same choices define our destiny in the end, which depending on some relationships built, will have different variations.

As we progress through the story we unearth secrets from the history of Gabe, Alex and other inhabitants, leading to an unexpected climax.

The graphics of Life is Strange: True Colors are well developed, showing that Deck Nine Games knew how to work with the Unreal Engine. From the colorful backgrounds, to the character designs that are full of details. 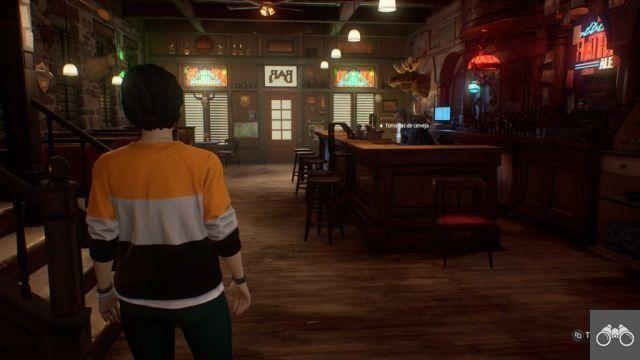 The graphics developed at Unreal gave a good improvement.

Life is Strange: True Colors talks about feelings, and one of the most important tools for playing the player is music. Here, from the first minutes, we are graced with themes that enchant us with melodies that touch the heart. The soundtrack is very good with a mix of unreleased tracks, created for the game, and others from well-known bands like Kings of Leon and Radiohead. These are some of the bands present in the game, which is well served in this regard.

The soundtrack packs in at crucial plot moments, and through Steph's record store, jukebox machines, and even a record player in her bedroom. Alex also has music-related skills, ensuring exciting moments with other characters in the plot. 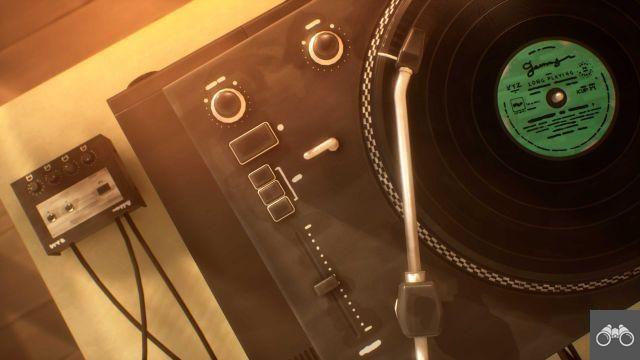 Music is the soul of the game.

The sound fulfills its role with the music highlighted, in addition to the effects that are differentiated. True Colors It has subtitles in Portuguese from our country, which are well synchronized, unlike previous games that always failed in this regard.

At certain points in the game and I heard some bugs in the ambient sound, but it could be something that changes with the patch updates at its release.

Life is Strange: True Colors it's an incredible adventure, full of feelings, friendship and lots of music. Alex Chen's story is full of twists, with points linked to the protagonist's past. The climax is interesting and the plot holds us until the end, but I feel that it is a story similar to what has already been told in the franchise, pointing out that it needs to reinvent itself.

The city of Haven Springs is beautiful and very colorful, bringing a feeling of warmth, as well as the secondary characters that are well written and make us create emotional attachment, making decisions a little more complex. The soundtrack is majestic, with a mix of well-known songs and others made for the game. In addition, she is part of the plot, with moments of joy and also a lot of emotion. The mini games are also fun, with a wide variety ranging from foosball to even a LARP with all the townspeople.

Life is Strange: True Colors It is recommended for those who enjoy the storytelling genre and do not care too much about a complex story.

* Make sure this is the current price before making the purchase. Values ​​may vary.

add a comment of Análise – Life is Strange: True Colors