Game bots for Discord allow you to add fun games to your servers and get participants excited. You can play cards with Uno and BlackJack, have fun with RPG-style adventures, guess drawings made by your friends with Gartic and much more.

Check out the best options below! 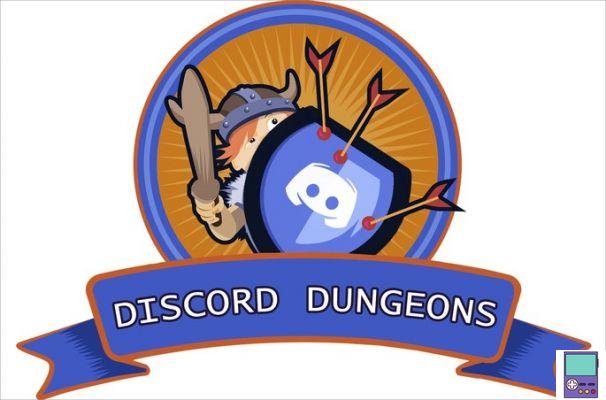 O Discord Dungeons takes an RPG adventure to your server. It is possible to create characters, join a guild and choose a side to fight. As in other games of the genre, it allows you to explore your skills, create tools and weapons and even have a pet to accompany you on this journey.

The player can work with his friends and other server members. This means both allying and trading items with them. Developers ensure that your progress is saved in a database and commands can be customized. 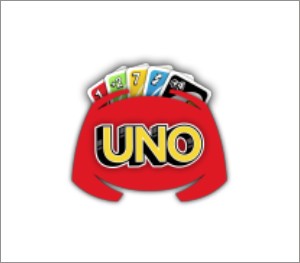 It is also possible to compete with players from all over the world and follow their performance in a global ranking. 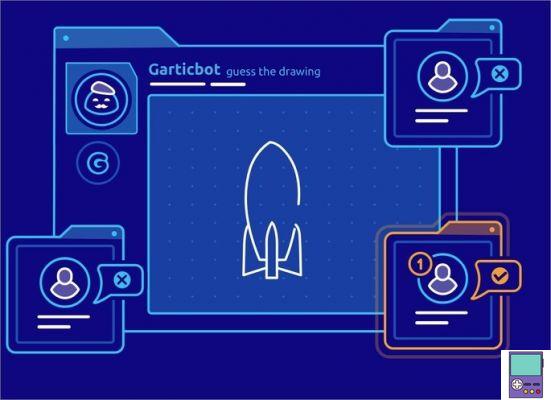 O GarticBot is well known for the Image and Action style game, in which the objective is to guess the drawing made by the other participants. Super complete, it allows you to select a theme, skip the current drawing and even receive tips.

The bot also has the games GamaGame, Anagrama and Musical. In the latter, the player needs to find the word that is missing in snippets of songs.

Famous for making meme-sharing easy, the Thanks Memer It also has fun games. Through simple commands, users can access minigames such as tic-tac-toe, questions and answers, and riddles.

You can still have fun with pranks like making the bot say whatever you want in different ways, making fun of friends, asking a magic 8 ball about the future and much more. Not to mention the thousands of memes and images available to die of laughter.

Poketwo brings the Pokémon hunting experience to Discord's servers. With it, it is possible not only to collect the characters, but also to exchange them with other users and even participate in competitions to win prizes.

Pokémon appear randomly on the server and only the fastest can capture it. The bot also allows you to challenge players in three-on-three disputes, in which whoever chooses the most powerful trio wins. 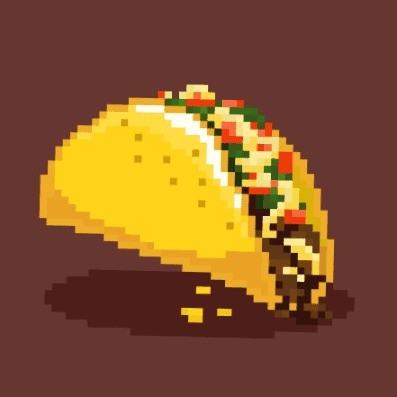 With TacoShack, you can run your own chain of Mexican restaurants right from Discord. It is possible to hire employees, think of a strategy to attract customers and assemble the menu. And you can still try to find some money to invest in your business.

The game lets you team up with your friends to create franchises. The user can also compete with players from all over the world in a ranking with items such as best selling clubs, highest revenue, among others. 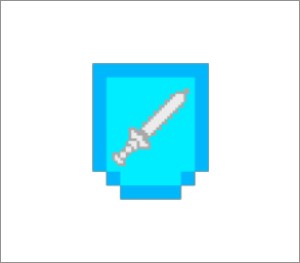 Another good option for fans of the style, the Epic RPG It brings together all the ingredients expected from games of the genre with a medieval touch. To level up, you need to earn armor and weaponry, as well as defeating bosses to unlock resources.

You will also have the challenge of escaping 15 dungeons. The bot offers player vs player style disputes and the possibility to win more money in betting games, withdrawal and loot strategies, among other options. 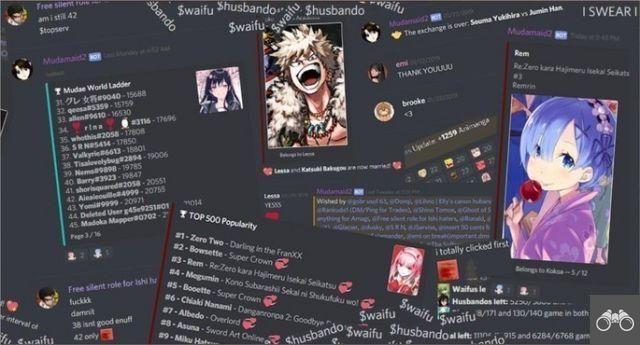 Mudae is a game that brings together more than 60 thousand options of characters from the universes of anime, manga, comics and video games to collect. Capture your waifus or husbandos and build your harem.

Plus: use your main characters to compete against other players and conquer your favorites in the Waifu Arena. There are also several text-based multiplayer games and even the ability to hunt Pokémon. 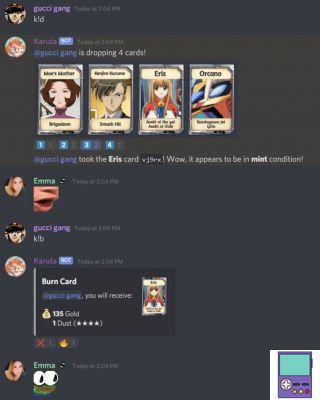 O karuta offers nearly 80 collectible anime characters, which can be traded and exchanged for items such as gold, tickets, and dust. Your cards are not tied to one server and can be used in transactions on different servers. 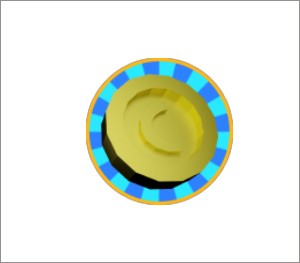 No Coin Master your objective is simple: be the master of coins. The game rewards users for every message sent. Accumulated coins can be used to get items and upgrades, which help you to get even more coins.

There are several game modes, daily rewards and the option to ally with friends in guilds. The bot offers a timer to avoid spam bans.

O BlackJack gathers several games of chance on your Discord server. These include lottery, slot machines, coin or dice and, of course, BlackJack. If you lose all your chips, you can request more every hour.

This internet classic won a bot version for Discord to call your own. The way to play is essentially the same as on the site. Just answer the questions asked by the Akinator and see if he can guess the person he's thinking of.

It can be a character, cartoon, video game hero, a famous person or even a relative. Hardly the little genius doesn't get it right. The good news is that it is possible to configure it to use in Portuguese.

O Rock Puppy promises to be a great companion while you wait for your squadmates to get ready for another match. The bot offers minigames like Truth or Dare, Q&A, Tic-Toe and Connect 4.

If you prefer, you can also try your luck on the dice, do a tarot reading or see the future in a magic 8 ball. There is no shortage of options to help pass the time.

O DueUtil lets you add to your server an RPG game full of weapons and missions. It is possible to compete with friends for the Top Dog rank, given to the strongest competitor. To climb the rankings, you'll also be able to tackle tasks and earn incredible rewards.

Every 6 minutes, the user can try a new challenge. It is worth mentioning the vast possibility of customization of items, missions and weapons. There are more than 7500 possible combinations.

Duck hunting season is open year round on Discord with the DuckHunt. When adding the bot to your server, occasionally birds will appear on the screen and you have to be quick to see who can hunt them first.

It may seem simple, but the game has more than 40 levels, different types of weapons and the possibility to buy items such as new clothes or sunglasses. The more experience the player has, the more points he accumulates to spend in the store. 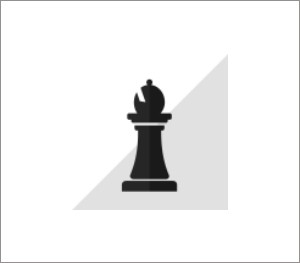 How about waiting for the next game to practice a little chess? the bot Chess lets you play the traditional board game directly from Discord. Just say which pieces you want to move and where.

It is possible to challenge other players. The other participants on the server can follow and comment on the matches. 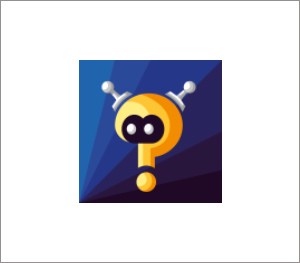 Triviabot is a fun question and answer game that promises to shake up your server. Just choose the number of questions and, if you want, set a theme. The first to answer gets the points. If no one says anything, start dropping hints to help.

It is possible to play in teams and individually participate in a world ranking. The bot allows you to configure the language for Portuguese. 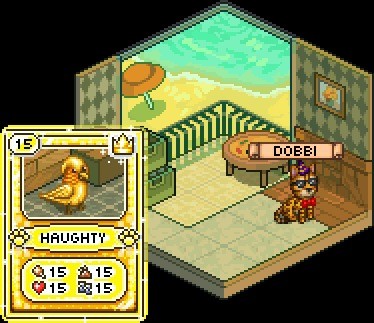 The creators of Tatsu define it as a bot focused on server engagement. Therefore, it offers a number of features, including moderation. But he is part of our list thanks to the virtual pet Tatsugotchi.

You must feed, clean and play with your pet to maintain desirable levels of Fullness, Dirt, Affection (Love) and Fatigue. When one of them is on edge, it affects your pet's attitudes. It is possible to interact and care for a cat, dog or bird.

add a comment of 18 best gaming bots for discord